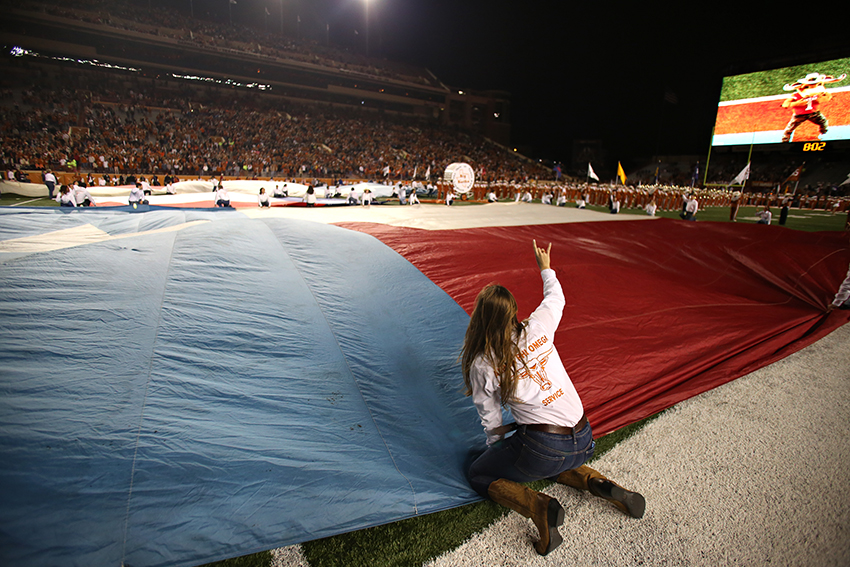 A 45-pound Texas flag was stolen out of the back of a locked pickup truck at Kerbey Lane on Nov. 7.

The flag, owned by service organization Alpha Phi Omega, is one of three used by APO for various events, such as Gone to Texas, football games and the march to the Capitol for the Boy Scouts of America. The stolen parade flag is 30 feet by 50 feet and is the most versatile flag for the organization, said APO flag coordinator Trent Nevelle.

The field flag, also owned by APO, is 100 feet by 150 feet and is reserved for field use during Texas football games. The size of the parade flag makes it easier to maneuver as it only requires 10 to 20 people to carry as opposed to 30 to 50 people for the field flag, said Nevelle, a mechanical engineering sophomore.

APO contacted the police about the incident, but does not intend to press charges if the flag is returned, according to the APO president Adrienne Brown.

“We tend to use them for a very long time because they’re very durable,” said Brown, an anthropology senior. “It’s a Texas flag the size of a small house. Nobody else wants that except APO. … It’s pretty essential to our flag projects in the upcoming semester.”

Brown said if the flag is not returned, the organization will begin fundraising in early December to raise $1,500 to replace the flag.

Moksh Chitkara, physics and astronomy senior, said he thinks increased crime rates around campus can be attributed to the community returning to pre-pandemic conditions. He said before the pandemic, theft in West Campus did not surprise him or his peers.

“The way that I heard about (the stolen flag) was … on their Instagram story,” Chitkara said. “I still remember when they showed the flag off; during the first week of your freshman year they invite you to this big (event) and I was shocked to see the flag to begin with.”

Nevelle said the organization has owned the flag for the past 20 or 30 years, and it is unfortunate that it has not been returned.

“This is a part of not just our organization’s history, but also campus history and state history,” Nevelle said. “That’s a symbol of tradition, and it’s just unfortunate that it hasn’t been brought back to us at this point.”