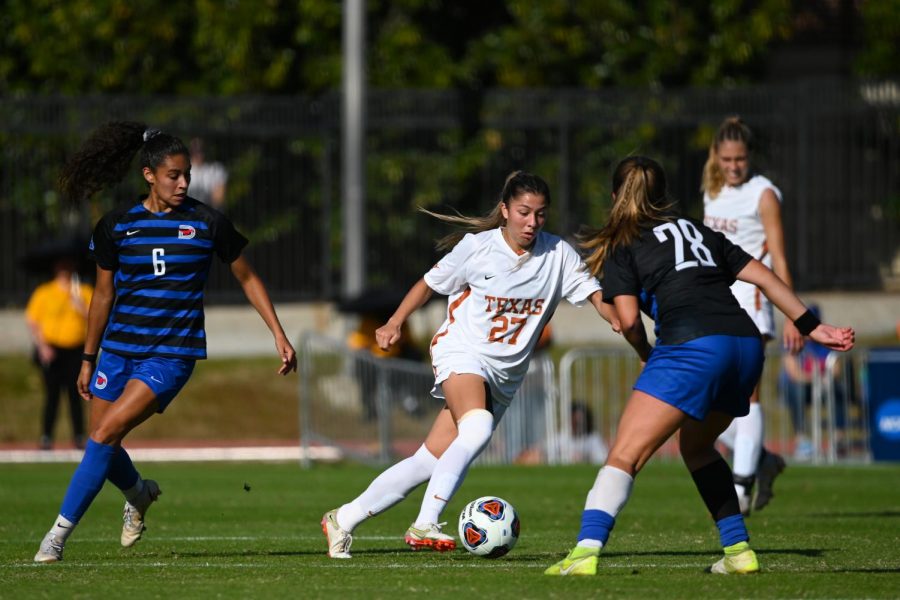 Near the 80-minute mark, senior midfielder Julia Grosso played a ball through the two SMU back defenders to freshman forward Trinity Byars, running toward goal.

After a defender tried to send the ball out of play but failed, Byars gained possession of the ball and wound up her leg to take the shot. What looked like the moment the Longhorns had been waiting for quickly turned into another missed opportunity as the ball went straight into the post.

Texas managed to get only 10 shots off throughout the match, but what was less impressive was only one of the 10 being on target. The SMU defense smothered Longhorn players, not allowing anyone to get enough space to create quality chances.

In the opening minutes of the match, it looked as if both teams were trying to find their footing. Unfortunately for Texas, SMU grew into the match at a quicker pace as they netted a goal in the sixth minute off a one-time finish.

The Longhorns managed to limit the attack from that point on, entering halftime down 1-0. But they would have to continue without senior midfielder Carlee Allen after she went down near the end of the first. The team suffered without her defensive aggressiveness.

As the players took the field for the second period, Texas players looked locked in, but those feelings quickly vanished. SMU scored in the 47th minute by spreading out the Longhorn defense, leaving a forward at the top of the box to score.

Now down 2-0, Texas attempted to get its zero off the scoreboard. They had a chance when freshman forward Holly Ward tried to create a play.

Ward raced down the left side of the field past the Mustang defense. Creating space, Ward sent a low cross into the box, but no Longhorn was around to take advantage of the opportunity, allowing SMU to gain possession.

Texas couldn’t get on the score sheet as they lost to the program’s former head coach, Chris Petrucelli, 2-0.

Including senior goalkeeper Savannah Madden, nine Longhorns played the entire contest. It showed by the end of the game. In the final moments, the Mustangs beat out Texas in energy and pace.

Every time a Texas player possessed the ball, SMU raced toward them to close the passing lanes. The Longhorns did not show any real sense of urgency, as they sat back and tried to play their possession-based game.

Although Texas has a lot to look forward to with Missimo and Byars, they are saying goodbye to a talented senior class that includes Grosso, Madden and Allen.

This year’s team will go down in the record books for multiple reasons, including a program-best 14-game unbeaten streak and a program-best five players on the conference tournament team.

With some records broken, there are still more the team wishes it could topple. Texas soccer has never made it past the third round of the postseason, and more importantly, has never won the NCAA championship.

Head coach Angela Kelly and her squad will have to wait until next year to chase the title, but the experience for the young group of athletes will go a long way.