‘Until we figure that out … we’re going to be swimming upstream’: Sarkisian, Thompson reflect on what’s missing from Texas football after devastating loss to Kansas 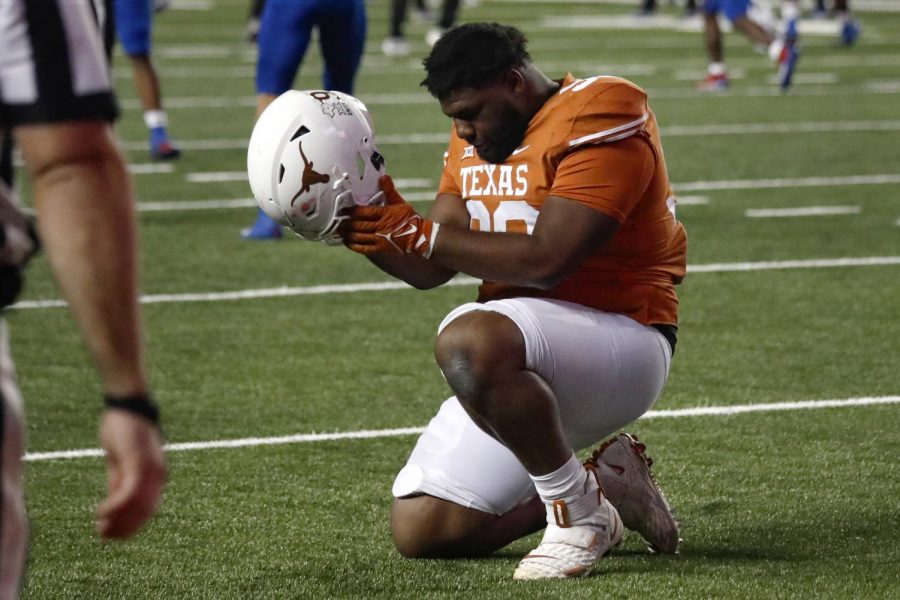 Thirty minutes after the devastating 57-56 loss to Kansas, Casey Thompson came into Saturday’s postgame press conference with his shoulder pads still on and a lot on his mind.

“Obviously, I think that we need to have everyone bought in,” Thompson said. “That has not been the case.”

Texas lost to Kansas despite being favored by 30 points. The Longhorns lost their fifth straight game, falling to 4–6, and are facing the longest losing streak in program history since 1956.

After the loss, the redshirt junior quarterback, who threw for six touchdowns and 358 yards in a valiant comeback effort that fell just short, said he had just been sitting down, reflecting on the loss for the past half hour and praying.

“Praying for our team, praying for Bijan (Robinson), praying for the guys that are dealing with injuries like myself,” Thompson said.

The quarterback also echoed his head coach, Steve Sarkisian, almost word for word. On the left wall of the team meeting room, where the postgame press conferences are held, a quote is printed emphasizing four qualities: “Discipline, commitment, toughness and accountability.”

Sarkisian and Thompson both thought Texas just didn’t have enough of all four to win on Saturday.

“The team that has discipline, commitment, toughness and accountability all of the time, that’s what wins games and that’s what ultimately wins championships,” Sarkisian said. “And we didn’t clearly play that way in the first half.”

The Longhorns fell behind 35-14 against the 1–8 Jayhawks in the first half, when error after error, including a Hudson Card pick-six, piled up before halftime. Sarkisian told the ESPN broadcast the final two and a half minutes was “one of the worst sequences that I’ve ever seen a team play that I’ve been a part of.”

But even after they battled back from the 21-point deficit to send the crowd at Darrell K Royal-Texas Memorial Stadium into a frenzy, Texas made one too many inexcusable mistakes, play after play.

The first mistake: An unsportsmanlike conduct penalty on defensive tackle Keondre Coburn after a key fourth-and-1 stop. The big run-stopping play gave the ball back to the offense needing a touchdown to tie the game down 49-42.

But the penalty forced the Longhorns to drive 15 more yards for the potential score and partially led to the second mistake: an interception from Thompson on the potential game-tying drive on an ill-advised throw across the middle of the field.

Even after the Longhorns battled to retrieve the ball again, scored before the end of regulation, and got on the board first in overtime, there was the third mistake: another unsportsmanlike conduct penalty, this time on junior wide receiver Marcus Washington’s celebration after the touchdown in OT.

That penalty donated 13 yards to Kansas, who would seize the short field and score after the fourth and final critical error of the night: a dropped interception by senior safety Brendan Schooler in front of the South End Zone that could have saved the night and sent the Longhorn faithful home breathing a deep sigh of relief.

Instead, Texas fell to Kansas — a team that had not won a road conference game since 2008.

“We can’t look at one play at the end of the game and say that’s why we lost,” Sarkisian said. “We lost because the first 30 minutes of football was bad ball, and then it put us in that position late in the game.”

Now, Texas is in a position it desperately needs a reset from and an offseason to put the heartache of the last five games in the past.

But it still faces two games, the first in West Virginia next Saturday and then Kansas State the Friday after that will determine Texas’s bowl eligibility. The Longhorns need to win both in order to reach the six-win marker.

In those two games, Sarkisian will find out whether his players have what it takes, and whether they have the discipline, commitment, toughness and accountability to pull themselves up after a fifth straight backbreaking loss.

“Until we figure that out — that it takes discipline, commitment, toughness and accountability all of the time — we’re going to be swimming upstream.” Sarkisian said. “And that’s the message to the guys.

At some point, they got to recognize that, and they got to do the things necessary to do that. Day in and day out. Game in and game out. First half, second half out. Start of ball games and the end of games. It doesn’t matter if it’s losing that fourth quarter lead or coming out flat tonight. That’s what it’s about. It’s about being a true competitor and competing with that mindset. And clearly, we didn’t do that tonight.”