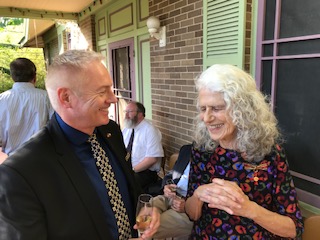 The Federal Republic of Germany awarded a UT professor with the Order of Merit on Oct. 19, an honor awarded to individuals with significant political, socioeconomic and intellectual achievements that contribute to the country.

Germanic studies professor Janet Swaffar received the award for her work in literary studies and innovation of language teaching practice in collaboration with the National Endowment for Humanities, the American Council on the Teaching of Foreign Languages and the Modern Language Association.

“I am very grateful for this award,” Swaffar said. “And to my department, which has a wonderful group of people who, I’m sure, were asked whether I deserved this (award) or not and probably said yes.”

Swaffar first found out she received the award after receiving a letter from the German ambassador in Washington, which she said came as a huge surprise to her as she never heard of the award.

“(It came) totally out of the blue,” Swaffar said. “I didn’t really appreciate what a great honor it was until I talked to friends who were German, and they said, ‘Wow’ and sent me big bouquets of flowers.”

Swaffar, who grew up during World War II, said she became interested in Germanic studies due to her mother’s interest in the country and after she spent a year teaching English in Germany.

Swaffar introduced a new language learning theory which says one must first learn to listen to the language to be able to properly read and write it.

“The theory was and I think it’s a correct theory, still is, that the auditory must be perceived first and related to a distinction in spelling,” Swaffar said. “Otherwise you undo as soon as you put the spelled word in front of you.”

Germanic studies professor Katherine Arens said in an email that the award is a testimony to what Swaffar has achieved because only just over 1,200 medals are given out per year and only one-third of recipients are women.

Germanic studies professor Hans Boas said the award is a big honor as it is not awarded to many individuals abroad.

“This (award) is a huge deal and UT should be so honored to have one of their faculty be awarded this very special recognition,” Boas said. “This is not just about her or Germanic Studies. This is really about the University of Texas and the great types of research that can be done here.”