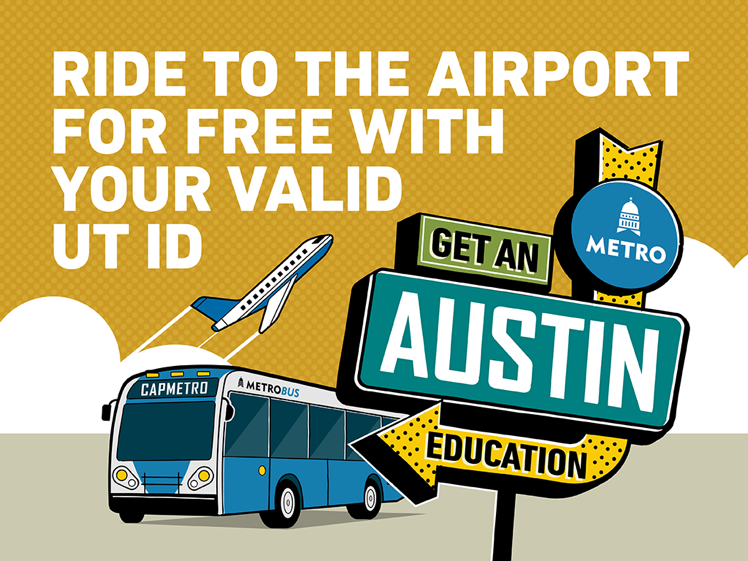 MetroBus 20 Manor Road/Riverside is a great big route that serves two far-East Austin landmarks, in the airport and LBJ High School. But the 20 doesn’t care at all that the shortest distance being between any two points is a straight line.

If you wanted to go from Austin-Bergstrom all the way to LBJ High on the 20, it’d take more than an hour. But you’d see a lot of Austin along the way!

If you’re riding Route 20, you can get anywhere on East Riverside, see downtown and Republic Square, take in The Drag and the UT campus, or sample all the great restaurants, bars and coffee shops along Manor Road.

Let’s take a quick look around:

Forget the sometimes-outrageous charges you get from ride-hailing firms and don’t make your roommate sit in the cell phone lot at AUS. Just check out the amazing blue neon guitar bus stop on the lower level and hop on for free with your valid UT ID. It’s the best way to get home for Thanksgiving, for real. Uber and Lyft don’t even have a regular blue guitar, much less a giant neon one you can sit in.

You’ve got tons of student housing along the East Riverside corridor, but you know that already. Maybe you even live there? But otherwise, you’ve also got a giant HEB, a bunch of bars and coffee shops (and the odd bar-slash-coffee shop) and a ton of taco joints. Plus,  it’s called Riverside for a reason … just walk 3-5 minutes north and you’re right on the river!

You don’t need us to tell you there’s a lot going on downtown. But there definitely is. And connections to just about anywhere else in the Austin area on CapMetro.

The Drag, West Campus, the Tower, DKR … and classrooms galore. You need to go to basically to all of these, and the 20 takes you there.

End of the Line

MetroBus Route 20 has taken thousands of students to LBJ High School over the years. It also brings residents of Far East Austin into downtown and their jobs. Another highlight of that end of the 20’s route is the Delco Center. If you grew up in Austin, there’s a good chance you did some sort of school competition at Delco.

And maybe you even took the 20 to get there and back.