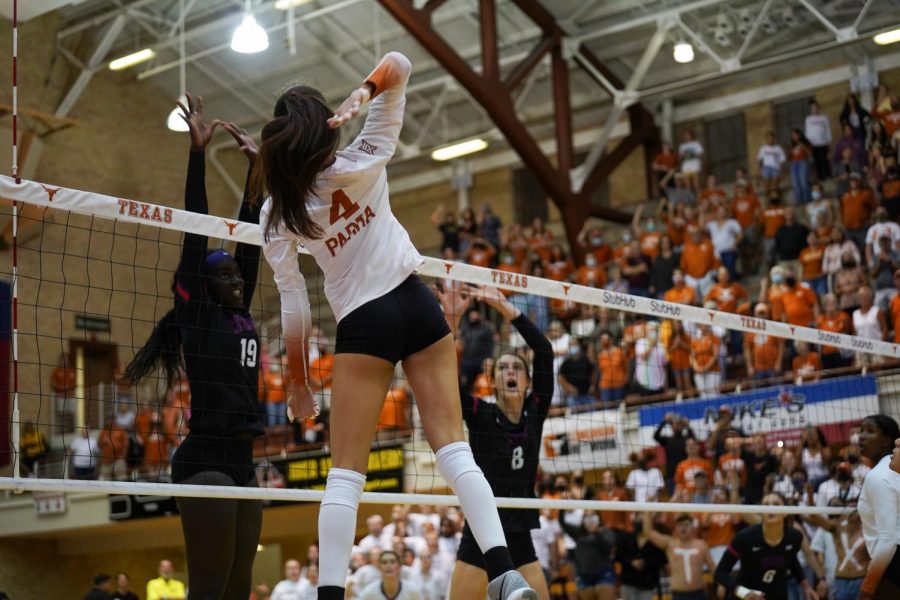 Texas is coming to the end of their regular season with its last home games this Thursday and Friday. But while the team has cruised through the Big 12, the Longhorns will need top performances from their key players to be successful in the playoffs.

Junior Logan Eggleston won Big 12 Offensive Player of the Week this Tuesday, the second time in a row she has come home with the award and the third time this season. After last Thursday’s game against Oklahoma, head coach Jerritt Elliott commented that she was hitting her stride in the season.

As conference play wraps up, Eggleston, along with junior Skylar Fields and sophomore Melanie Parra, are three key players who Texas needs to reach its postseason form and return to the NCAA Championship finals.

Since the beginning of the season, Elliott has emphasized the importance of Texas’ service game in winning close matches. While serves have seen improvement across the board, propelling Texas to No. 2 in the country for aces per set, a chunk of the success must be attributed to Parra, who is in her first full season with Texas.

Through September and October, the outside hitter demonstrated an important edge for the team in the area it needed it most, hitting four service aces in one match against TCU and five against Iowa State, including a series of four in a row. With an average .61 service aces per set, she is ranked No. 5 in the nation.

In recent games, Parra has struggled slightly, averaging just one service ace per match in the past five games. But when Parra struggled, Eggleston picked up the slack, hitting three service aces in her last match against Oklahoma and two in the game before.

Continuity by the pair will be a big help against teams like No. 1 Louisville, who is averaging only 1.7 aces per set compared to Texas’ 2.2.

Texas will also need to see a top performance by junior Skylar Fields, who had an eye-catching performance early this season with 26 kills in a match against Kansas. Despite a slow night against Oklahoma on Thursday with only two kills, Fields seemed to find her mojo on Friday. An emerging leader for Texas, a strong performance by the opposite hitter could be a game changer.

The Longhorns have four matches left in their regular season before likely advancing to the NCAA tournament beginning Dec. 2. Throughout the year, Texas has shown time and time again that each team member has the talent it takes to be part of a winning championship team. Now, it is time for Texas to assemble that talent on the court.

These three key Texas players will have their next chance to showcase their skills on Thursday at 7 p.m., when they face Kansas State.