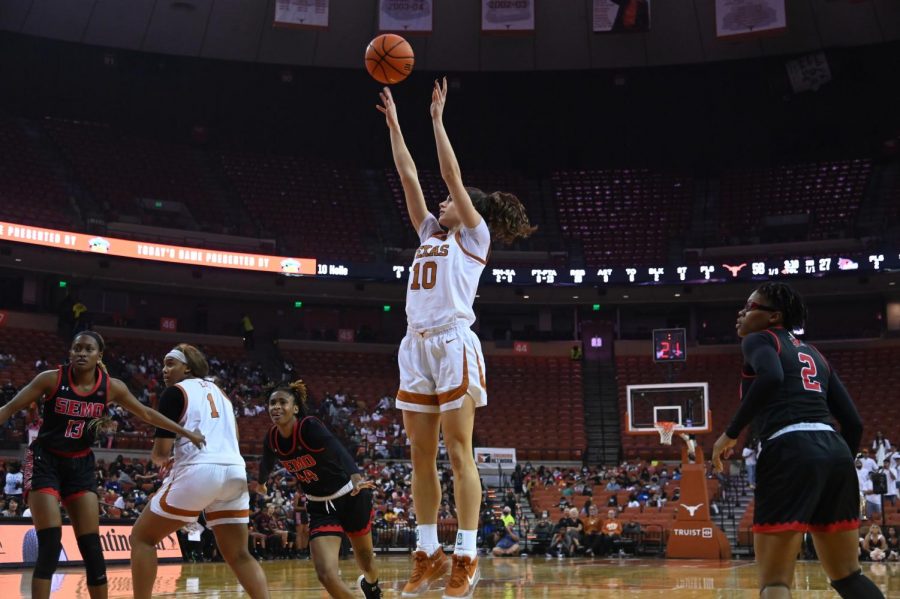 “That was a lot of fun,” sophomore guard Shay Holle said. “Last year, it was cardboard cutouts in the stands. Having all those kids and it being really loud was really fun.”

The name of the game for No. 12 Texas was defense. The Longhorns forced a staggering 27 turnovers and held the Redhawks’ shooting to below 35% from the field.

The press defense that had given teams nightmares all year didn’t miss a beat  Wednesday.

“I think it’s a lot like practice,” senior center Lauren Ebo said. “We work really hard in practice to deny and get up in the press. Obviously, there are places we can grow on the defensive side. I think we continue to work, put our heads down and we’ll be fine.”

Head coach Vic Schaefer rewarded Matharu with a start after her epic game against Stanford and she didn’t disappoint. After her heroics from Sunday afternoon, Matharu looked to make a statement and put her fingerprints on the game early.

With 9:32 left in the first quarter, Matharu stole the ball from an unaware Redhawks player. She took the ball on the break, and Texas scored off her steal, setting the tone for the game.

With the Longhorns up big early, it allowed some bench players to get playing time. Sophomore forward DeYona Gaston and Holle took full advantage of those minutes, showing flashes of being future key contributors for Texas.

Gaston showed that she can be a versatile scorer on the inside for Texas and be a disruptor on the defensive side of the ball. Gaston put up an impressive nine points in 13 minutes played.

Holle got to her spots and set up her teammates on offense. The guard had a similar defensive intensity to Matharu and accumulated one block in the afternoon.

The Longhorns took care of business against a less than stellar Southeast Missouri State team. On Sunday, however, the team will face a tougher test on the road against No. 16 Tennessee.