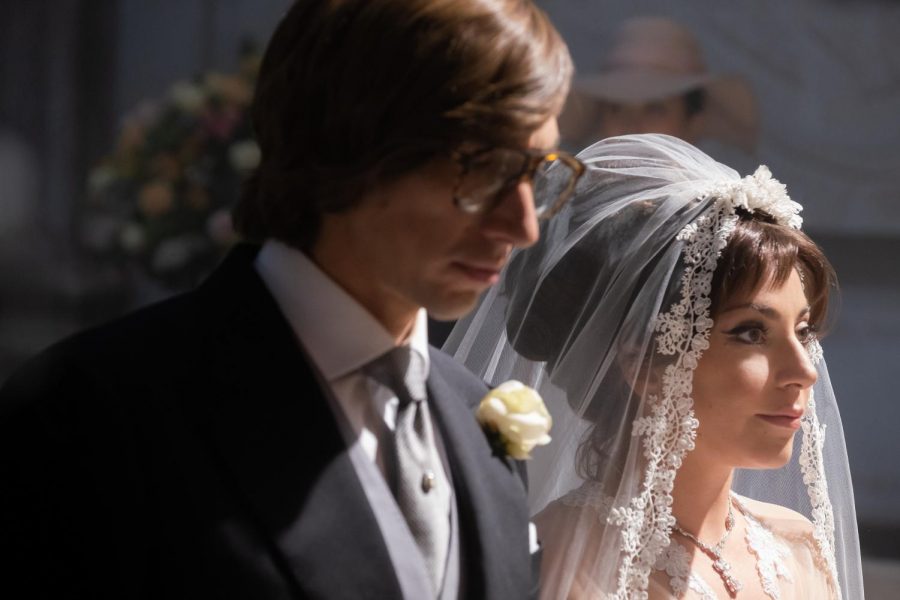 “House of Gucci,” directed by Ridley Scott, chronicles the real-life story of the Gucci family and the infamous killing of Maurizio Gucci. Sporting an impressive cast featuring Lady Gaga, Adam Driver (“Marriage Story”), Jared Leto (“Dallas Buyers Club”) and Al Pacino (“The Godfather”), the film follows key characters amid the rise of the “Gucci” fashion brand throughout several years. Incorporating both intense moments of drama, comedy and thriller, “House of Gucci” tells a lengthy tale about the dangers of greed and wealth.

Lady Gaga steals the show in the role of Patrizia Reggiani, who marries into the Gucci family, fully sacrificing herself to the personality and aesthetic of the character. Her presence commands each scene she enters, holding her own among Oscar-Nominated actors like Driver and Leto. Driver subtly yet effectively takes on the main role of Maurizio Gucci. His dialogue delivery and overall body language add to the intrigue of the role he is playing, as he fully embodies the power and coyness of Maurizio.

Leto dials up the absurd comedy with his ridiculous yet fitting performance as Paolo Gucci, cousin of Maurizio. Impressive makeup effects completely transform the flashy actor into a disheveled, greedy Gucci adversary. Pacino, as expected, flashes his acting chops with ease, slipping right into the character of Aldo Gucci. Pacino and Leto share several scenes, showcasing a comedic yet slightly sad father-son relationship.

Magnificent set design and cinematography bring the lavish Gucci family to life. Luxurious fashion shows and elegant storefronts decorate the visual aesthetic of the film with an appropriate amount of flashiness. As Gaga’s Reggiani further involves herself in the inner workings of the Gucci brand, her attire and makeup reflect the shift in her character’s power.

In terms of the narrative, “House of Gucci” shifts between varying character perspectives, all revolving around the central relationship of Maurizio and Patrizia. The film does a relatively strong job of balancing each of its storyline elements, although toward the latter half it begins to overstay its welcome. Since the script is based on the downfall of Maurizio, there comes a point in the film when viewers must simply adjust for an expected resolution they know is coming. This results in a bit of a prolonged third act, stretching moments out to unnecessary lengths.

Despite some pacing issues throughout “House of Gucci,” the electric cast elevates the historic family drama through an intriguing cinematic experience.