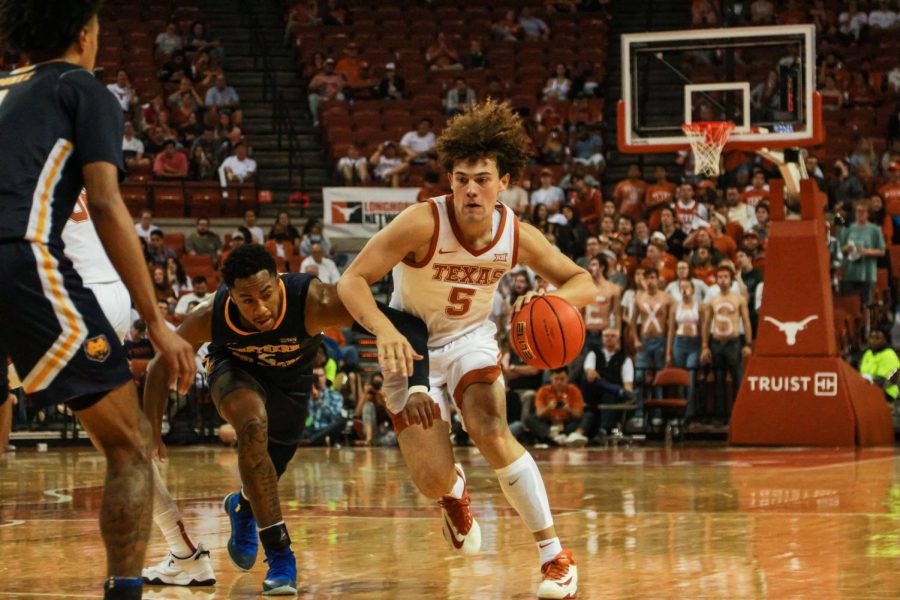 Q: Are there any prospects that Texas is recruiting that would give the team more height?

Christina Huang: Chris Beard recently announced the signings of 6-foot-3-inch point guard Arterio Morris and 6-foot-7-inch small forward Dillon Mitchell. Both are five-star recruits, with Morris hailing from Kimball High School in Dallas and Mitchell coming from Montverde Academy in Florida. While neither one of these signees are especially tall, both definitely have the skill and talent to become true competitors. Beard and the rest of his staff have proven themselves to be great recruiters, so I am excited to see who the new signees are as the names start rolling in.

CH: I could definitely see Beard utilizing the transfer portal again in the future. He’s obviously built a stacked roster of mostly transfers with this current Texas team, so I would bet on him using the portal to replace a couple of seniors.

Q: How many available roster spots will Texas have next year?

CH: Texas’ current roster is mostly made up of upperclassmen. Jaylon Tyson, Devin Askew, Cole Bott and Gavin Perryman are the only players on the roster who are not either juniors or seniors. Of those, Tyson and Askew have played some good minutes so far this season. It’s too early in the season to say who’s coming back and who’s not returning, but there is a lot of NBA-level talent on this team. It wouldn’t surprise me if the 2022-2023 team loses a couple of guys to the NBA Draft.

Q: After the Gonzaga game, what is the area that the Longhorns need to improve in the most to get to being a Final Four calibre team?

CH: I think the matchup against Gonzaga really exposed the Longhorns’ defensive weaknesses. I know that Drew Timme is one of the best, if not the best, college basketball players in the country, but Texas had such a difficult time trying to defend him. There were multiple points in the game where Timme was left wide open in the paint, and things like that can’t happen if Texas wants to make a deep postseason run. Texas’ defense looked better a week after the Gonzaga game, but I don’t think we’ll be able to truly gauge how good the team is defensively until the more competitive stretch of the season begins.

Q: What are your thoughts on Chris Beard’s usage of Tre Mitchell?

CH: Tre Mitchell has been playing really well so far. He was just named the Big 12 Newcomer of the Week, and it’s pretty easy to see why. He averaged 15 points and 7.5 rebounds in Texas’ last two home games, so I think he’s really starting to settle into his role on the team. Mitchell transferred from UMass, where he averaged at least 30 minutes per game for both his seasons there. So far, he’s only playing about 19 minutes per game at Texas but it’s clear that he’s still making a difference on the court.

Q: What are some of your predictions regarding conference play?

CH: The obvious threats to Texas’ chances at winning the conference are Kansas and Baylor. Kansas is the basketball “blue blood” in the Big 12, and the Baylor Bears are the reigning national champions, so it’s pretty easy to see why they’re both dangerous. But I wouldn’t count out West Virginia either. The Mountaineers have looked really good lately, even if they were upset by former Texas coach Shaka Smart’s Marquette. There is still so much uncertainty surrounding Big 12 basketball, but it is fair to say that Kansas, Baylor and Texas are frontrunners for the Big 12 Championship and favorites to make deep postseason runs. But in general, the Big 12 Conference as a whole looks pretty solid this season, so it’ll be really interesting to see how things pan out.

Q: What position would Bevo play if he played basketball?

CH: Bevo would be a center, just because of his sheer size.