UT should not allow political entities to use their facilities 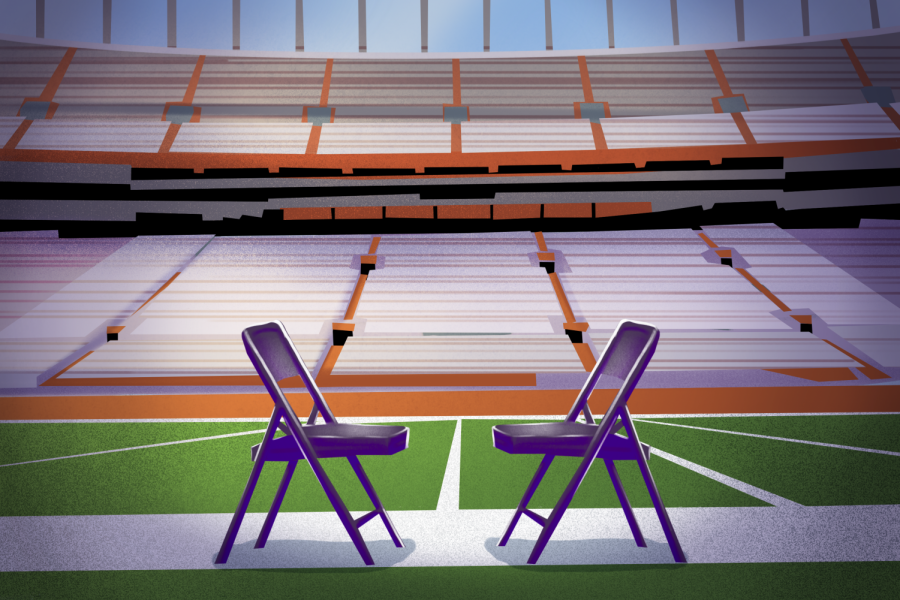 The video opens with a wide shot: Amanda House, deputy political editor of right-wing news channel Breitbart News, sits on the left, and Texas Governor Greg Abbott sits on the right. The subjects on the screen were enormously influential figures who deserved my attention, but what caught my gaze was the location.

In the background of the video were the orange and white-colored seats I know so well, with the words “Longhorn stadium” running across the screen. At that moment, a single question popped into my head: “What was UT thinking?”

Recently, Breitbart News interviewed Greg Abbott over politically charged topics such as vaccine mandates and the energy crisis. With permission, Breitbard used UT’s football stadium as the background for the interview. The Longhorns and school colors gave viewers the impression that UT supported the video.

This sense of endorsement is unacceptable from a large public university such as UT, and it puts their image at risk by associating them with specific politicians. These actions are not representative of the student body, and UT cannot allow political entities to use their facilities and branding.

“Abbott does not represent my views … You’re not supposed to do political advertisements on public university grounds … I think it’s super hypocritical; I also just think it’s wrong,” Evans said.

UT has stated they do not run political advertisements on their networks, but allowing Abbott to utilize UT’s stadium in a media interview serves as an endorsement of his messages and political viewpoints.

UT should not be hosting political figures on their property. In doing so, they risk alienating and unfairly underrepresenting the large amount of the student body that disagree with such views.

Furthermore, UT risks the overall reputation of their brand when appearing to endorse figures such as Abbott. Abbott, in his interview, was called out by many for making questionable claims.

Roy Casagandra, a government professor at Austin Community College, spoke about Abbott’s statement on state, government and public health. Abbott stated in his interview that throughout history, states have been in charge of the health and safety of the people rather than the national government.

Casagandra said this statement is not completely true.

“That has been true to a large degree, and it accounts for much of the poor health of the US … But the federal government has always been involved (in) research and research funding, Medicare, the ACA, etc,” Casagandra said in an email. “Also it is worth pointing out that safety has definitely never been just a state matter. So that’s just nonsense.”

Not only has UT given an impression of endorsement of Abbott through use of their properties, but also the University recently chose to pull advertisements criticizing Abbott on Longhorn Network. UT’s bylaws state that they will not discriminate on the basis of political viewpoint in the enforcement of their rules. Is supporting a political figure through supposed endorsements and suppressing dissent on UT network not discrimination based on political view?

University spokesperson J.B. Bird did not respond to requests for an interview despite being contacted multiple times within one week. This gives limited insight into UT’s choice to allow Abbott’s interview, and disregards addressing the strong feelings students have regarding the issue.

UT, understand your role. By being a public university, you hold a certain standard in your branding and represent the diverse student body you have spent years creating. Choose who you endorse to use your facilities wisely or run the risk of underrepresenting your student body. You are ruining a 137-year-old legacy by choosing to be at the beck and call of a political leader’s image.

Michael Zhang is an undeclared PACE freshman from Katy, Texas.