Key plays from Coburn, Ojomo come up clutch in second half of win over Kansas State 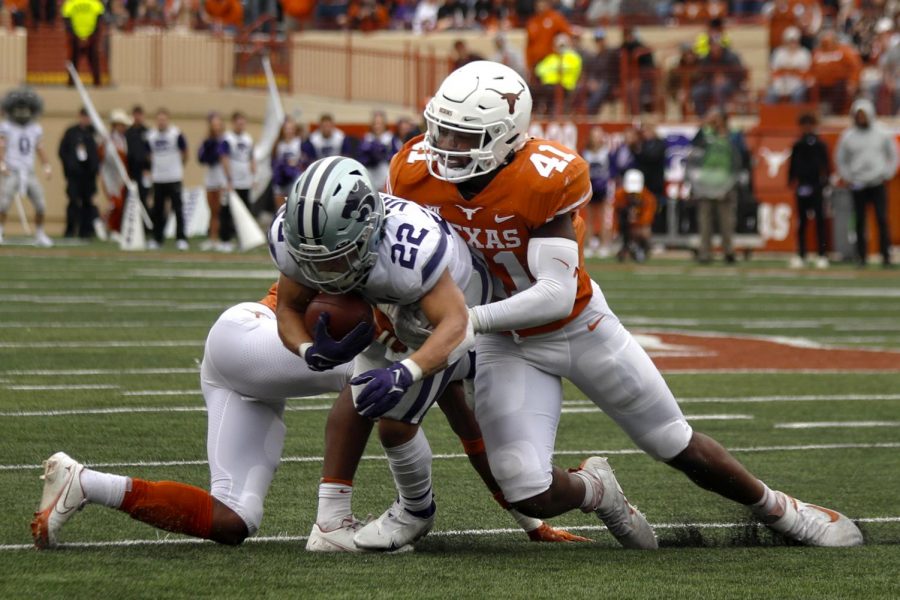 Head coach Steve Sarkisian put his faith in the defense with two questionable decisions to kick field goals on fourth down.

With Friday’s game against Kansas State hanging in the balance, the Texas defense came up clutch twice on its own fourth-and-short stops to pitch a shutout in the second half.

The first stop came courtesy of junior defensive tackle Moro Ojomo, who stuffed elusive Wildcat running back Deuce Vaughn on a key fourth-and-1 with a blocker on his back.

His partner in crime, fellow junior defensive tackle Keondre Coburn, bullied his way through his own blocker to bring down Wildcats quarterback Will Howard on an even more crucial fourth-and-1 with 4:03 left.

Coburn has said all season that much of Texas’ struggles in the run game come down to winning one-on-one battles. And in the second half of Friday’s game, Ojomo, Coburn and the Longhorn front seven did exactly that, taking control of the line of scrimmage in a way that Texas has rarely done in the past. The two defensive tackles even battled back to play after suffering stingers in the first half.

“Those aren’t fun,” Sarkisian said. “Imagine getting that from your neck down and your arm feeling numb and all that. It’s painful. But I think it tells you something that they’re back in there fighting and back in there making plays at critical moments.”

The Longhorns didn’t exactly start hot in the “line-of-scrimmage” department, struggling in the run defense early like they have for much of the season.

Vaughn finished with 24 carries for 143 yards, the eighth 100-yard rusher Texas allowed this season. Howard broke off a 71-yard touchdown run that starting senior safety B.J. Foster played so poorly he was benched for the rest of the game.

“(The) one play on the quarterback run, … I didn’t love our effort by a couple of our players, candidly,” Sarkisian said. “And I think we got the right guys in there that were playing hard.”

But after struggling in second halves throughout the entire season, the defense stepped up Friday after halftime.

Jones’ return from a foot injury paid off dividends in the second half after he got his feet wet from his return. So did the play of sophomore linebacker Jaylan Ford, who started and played after both DeMarvion Overshown and Luke Brockermeyer missed the game due to injury.

Both defenders had key “splash” plays in the second half, soundly beating their one-on-one matchups to derail potential K-State scoring drives.

And after each huge play, the Texas defense and its sideline was as animated as the unit had looked all season: fired up and celebrating each huge stop. Jones even danced after his stop —  he called it a “Louisiana jig.”

Texas needed every single one of those splash plays and every single bit of energy in a one-score game to end the losing streak and finish 5-7 on the season.

Now, the Longhorns need luck to make a bowl game: 5-7 teams can squeak into a bowl if there aren’t enough 6-6 teams. If they do, all eyes will be on the returning players in the front seven that shined in the second half against Kansas State.