No. 2 Longhorns cause Texas Tech takedown, 3-1 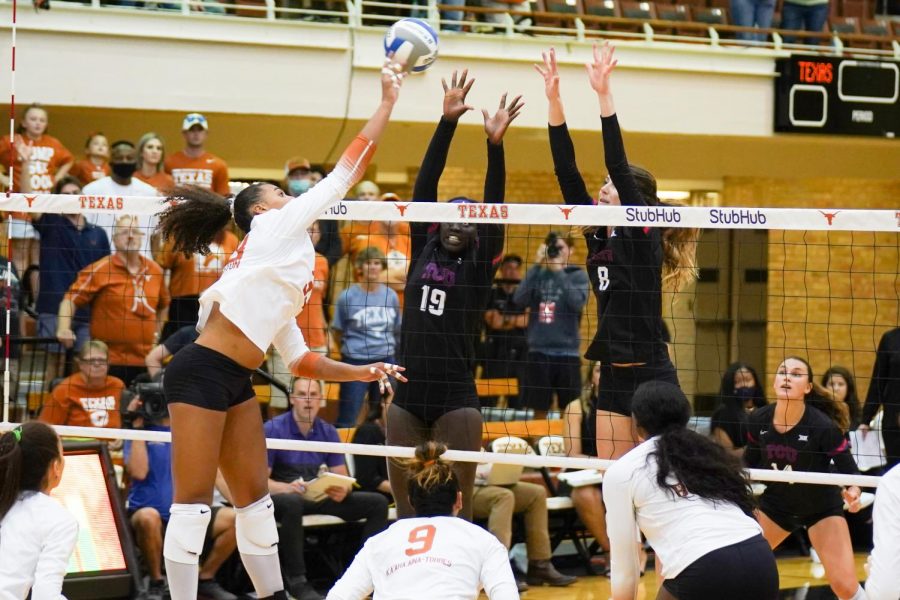 The Longhorns are almost there.

Almost to a Big 12 Championship and almost to the tournament they’ve sought redemption for since their loss in the championship last season.

No. 2 Texas took out unranked Texas Tech 3-1 in their second-to-last step in the conference tour: United Supermarkets Arena in Lubbock.

The Longhorns started Friday’s first set with clean execution from their key players. Sophomore Melanie Parra went on a three-ace streak early on, and junior Logan Eggleston delivered a block that silenced the Texas Tech front.

The Red Raiders made a few attempts for redemption but couldn’t keep up with the aggressive play from the Longhorns. Junior Asjia O’Neal stepped up in the first set, leading the team with three kills and a service ace. While Texas Tech started to create a comeback in the end, Texas locked away the first set with a hit by Eggleston, 25-17.

The Red Raiders settled into play in the second and held on with Texas, taking the lead in the middle of the set 13-12. The Horns suffered from a few moments of confusion that allowed for a dropped ball between Eggleston and O’Neal. However, instead of relying on more senior players to bring back the Longhorns, head coach Jerritt Elliott cycled in freshman DeAndra Pierce and sophomore Reilly Heinrich for a few volleys.

The Red Raiders and Longhorns battled out the set to the very end, but the Longhorns were unable to hang on. Texas lost set two 25-22 after an attempted kill by Melanie Parra dropped out of bounds.

While Texas Tech continued to put up strong play in set three, the Longhorns found their footing again with the help of veteran players Eggleston and junior Molly Phillips.

Phillips put up seven kills on the night by the end of set three and the Longhorns worked their way to a comfortable seven-point lead by the middle of the set. Parra, who has had strong serves throughout the season, brought a threat of kills from the left corner. Eggleston and the Longhorns handled the Raiders for a 25-16 victory.

Throughout the match, Eggleston worked as a guide for Texas and an undeniable threat for Texas Tech. By the end of the third set, Eggleston hit 14 kills, just over a third of the kills for the team. She held a .375 hitting percentage along with a block and three block assists.

The fourth set saw more success for Parra, who worked up to seven kills, matching her season record. Junior Skylar Fields also found some rhythm and delivered the match-ending kill for Texas in a 25-17 victory.

Texas and Texas Tech will play again Saturday night in their second match and final match of the regular season.

If the Longhorns bring home a second win, they will win a Big 12 championship.