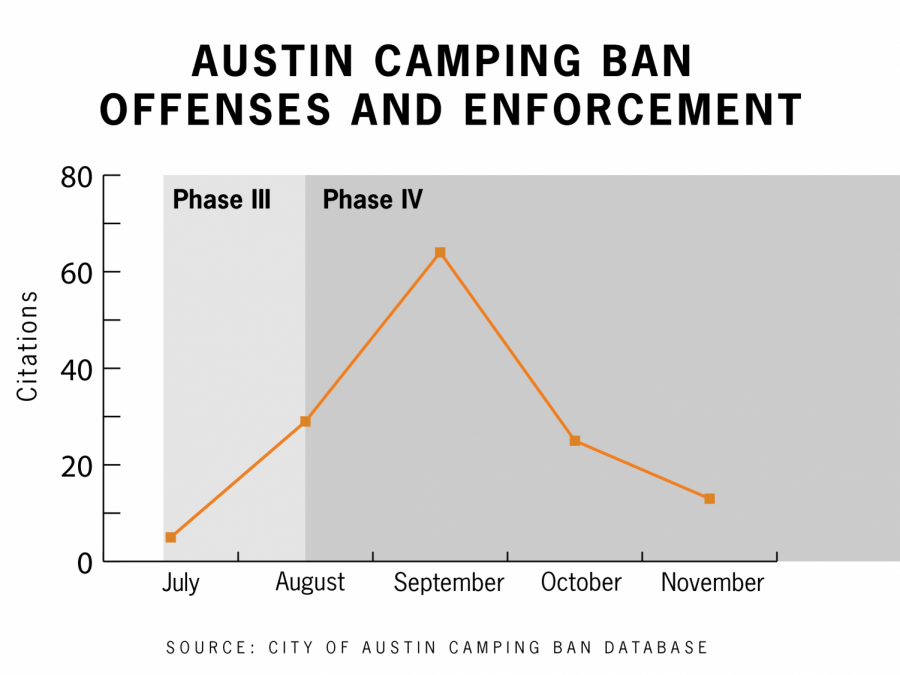 The Austin Police Department has not issued any camping ban citations for unhoused people in the West Campus zip code, 78705, since the ban went into effect in July, despite concerns of student safety expressed by the organization that added the ban to the voting ballot.

Proposition B, passed in May 2021, prohibits sitting, lying down or camping in public areas such as sidewalks near the downtown area around the UT campus, including West Campus and North Campus. As of now, APD enforces the ban by arresting any individual who does not voluntarily leave an area after a citation is issued.

According to a City of Austin database, APD has issued around 167 citations since the city implemented the ban. Katya Ehresman, a local advocate who campaigned against Prop B, said Save Austin Now, the group who put the ban on the ballot, used fear to gain student support, but said student safety in West Campus has not changed since the ban was implemented.

“One thing that we did see was the way that fear was being brought up or referenced in a way that now we’re not seeing the effects of the implementation similarly reflect,” UT alumna Ehresman said.

Save Austin Now made efforts to gain support for the ballot item by pressing issues of student safety at the University and local public schools, stating unhoused people posed threats to students. To do this, Save Austin Now introduced Moms for Prop B, a group of moms who had negative experiences with people experiencing homelessness across the city.

Ehresman said using student safety as a rallying point for the ban was a way of trying to get the student vote to turn out.

“I think a lot of students were angry at the misinformation campaign that was being issued during the election because some were saying that it was specifically about providing rehabilitation, but that’s not what the bill said,” Ehresman said.

The proposition language gives no mention of rehabilitation for people experiencing homelessness.

“As students, we do come across homeless people all the time, but it’s just not our biggest worry,” chemical engineering senior Xu said. “But a lot of the people who live in the neighborhoods around Austin that are older and maybe have families and things like that, seeing homeless people in the parks is like a big deal for them and a huge motivating factor for them.”

Joshua Gamboa, communications director for UT Young Democratic Socialists of America, said Proposition B is an ineffective solution because it is poorly defined.

“Prop B has rules, but it doesn’t specify how to enforce them,” communications senior Gamboa said. “That’s why we see a lot of if-ands about how the enforcement goes depending on where you’re at … a better solution would be that we actually start investing in helping the homeless while at the same time trying to keep them off the streets away from West Campus and Guadalupe Street.”