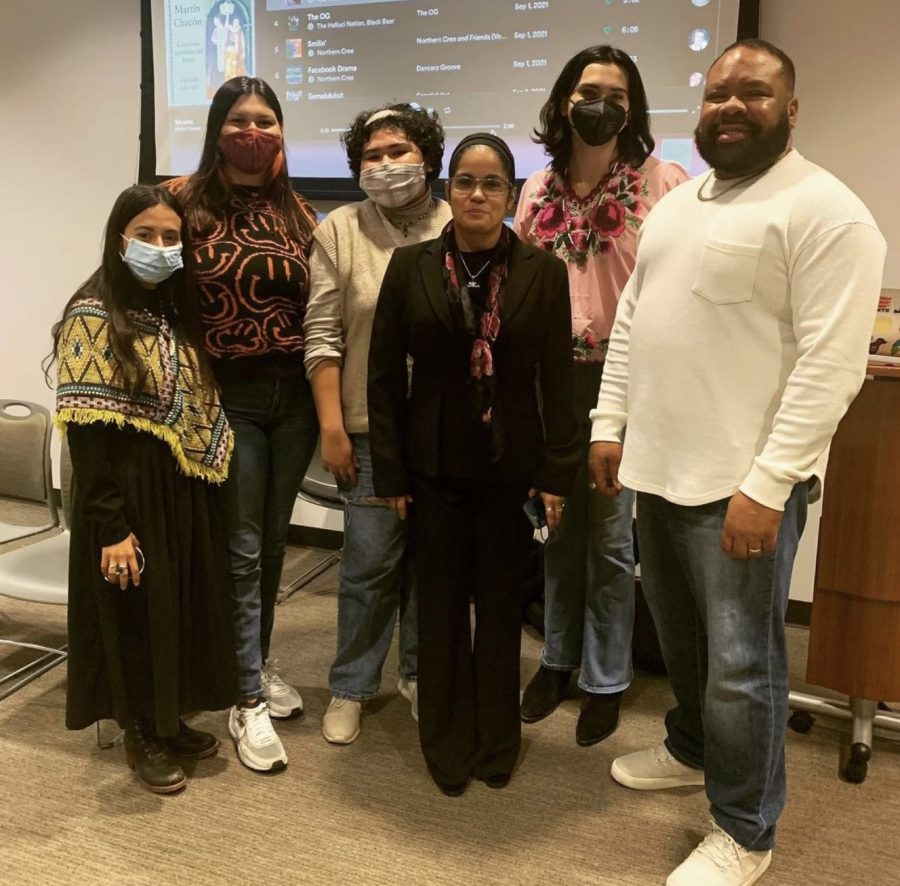 Before Sewa Olivares identified as Two-Spirit, she explored and learned about different labels for her identity, such as bisexual and nonbinary. Three years ago, Olivares found her authentic identity within the pan-American Indian, pan-Indigenous Two-Spirit community.

“The Two-Spirit identity is a way for Native American people or Indigenous people to identify themselves as ‘queer’ or ‘genderqueer’ outside the conceptions of Western gender and sexuality,” said journalism junior Olivares.

Olivares identifies as “Two-Spirit” — an umbrella term used to describe Native or Indigenous individuals who do not conform with gender constructs but rather identify with their tribal affiliations. Embodying both their masculine and feminine spirits, they reclaim their precolonial identities. Many Two-Spirit students at UT join communities such as the Native American and Indigenous Collective organization to celebrate their cultures.

In the past, Olivares said she felt uncomfortable identifying as Two-Spirit because she didn’t know the history of the term. As she got older, she spoke with members of the Two-Spirit community, which shifted her perspective.

“(Two-Spirit members) were describing things I’ve always felt even before I knew what we believed about people like me and knew about people like me. … It was just very beautiful,” Olivares said. “That’s something that (has) contributed to my confidence in claiming the identity.”

For Brianelly Flores, radio-television-film freshman, identifying as Two-Spirit relates to the tribal history of the Purépecha. Indigenous to a northwestern region in Mexico, the Purépecha value sacred lakes, the most important one being Lake Pátzcuaro. Flores said “Pátzcuaro” means “where the sky meets the earth, the door of the sky.”

“In our legends, we say that a monarch butterfly emerges from (our ancestors) or their soul becomes a butterfly, and when they die, there is a butterfly somewhere on their way to Lake Pátzcuaro,” Flores said. “How Lake Pátzcuaro is to my people, as a bridge between worlds, that is what being two-spirited is to me.”

“Growing up, it was hard to really pinpoint what tribal affiliation I was associated with,” Serbones said. “In general, it’s hard for both my backgrounds because I’m Black too. … Throughout my time at UT, it’s been just a beautiful experience getting to learn more about that side of myself. … (It’s) something that took me a while to really grow, not out of, but grow into being more comfortable with myself.”

Serbones said students can get involved with organizations on campus, but the administration must also do their part in acknowledging UT’s Indigenous population.

“If there’s other things that University administration can do, (it) is just acknowledge Native and Indigenous tribes. … We created something called ‘The Land Acknowledgement,’ which is read at the beginning of some events on campus,” Serbones said.

Like Serbones, Olivares serves as the current director of operations for the NAIC, and Flores assists Olivares’ position. The NAIC welcomes new members at all times and invites the non-Native UT community to visit their events and learn more about the Two-Spirit community on campus.

“The emphasis should always be to listen to Indigenous people and to never try and jump the gun in terms of identifying them,” Olivares said. “It’s much more respectful to ask someone how they identify (and) what pronouns they use. … If you just listen and prioritize their humanity first, you’d (see) it’s more complicated than the ways that we’re used to internalizing gender and sexuality. … Our identities are extremely important to us.”

Editor’s Note: Olivares serves as an Internal Relations Contributor for The Daily Texan’s Diversity and Inclusion board.