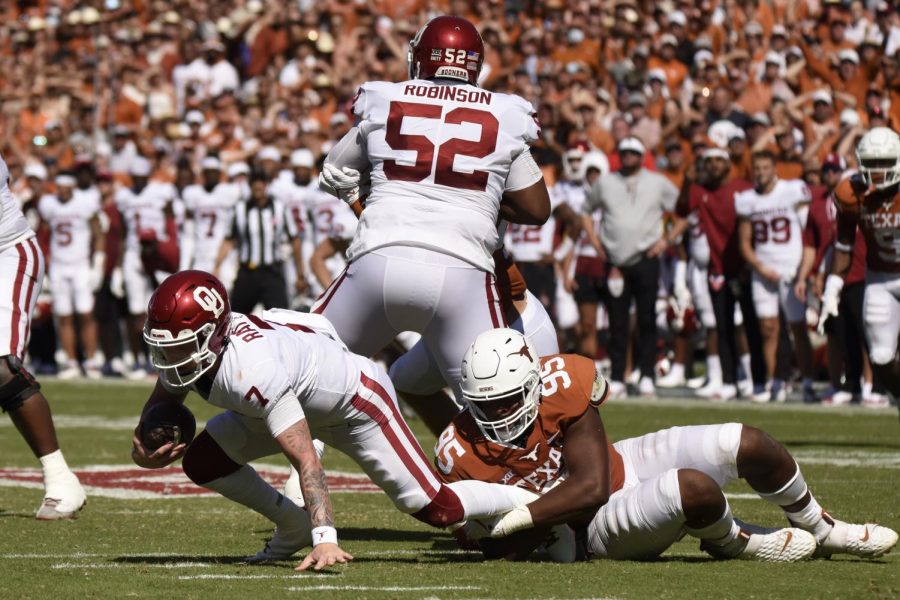 Nathan Han: It’s over. No bowl game, 5–7 and our last one of these stories ever. After the win over Kansas State put an end to the Texas Football season, head coach Steve Sarkisian used two words to describe the season: roller coaster. How would you describe Texas’ season after spending your last fourteen Tuesdays writing these discussion stories?

Matthew Boncosky: If Texas’ season was a roller coaster, it certainly was the kind that makes you want to hurl more than it was the exhilarating kind. The season had everything. A hot, 4–1 start, a 28-7 Red River lead against hated Oklahoma, then a historic six-game losing streak and accompanying monkey drama and leaked bus rants.

I would describe Texas’ season as humbling, because now Texas fans hopefully understand that it’s going to take time to rebuild the program. A flashy coaching hire didn’t turn things around in year one after years of staff turnover and roster mismanagement. Now expectations can be realistically tempered as Sarkisian undergoes his program overhaul.

Part of that overhaul is an expected wave of transfers both out of and into the program via the transfer portal as Sarkisian hopes to build a culture of players who are bought into his plan and weed out those who aren’t. What are your early thoughts on what next year’s roster could look like?

NH: I think the biggest turnover when it comes to next year’s roster will come on defense, specifically in the secondary, where all four starters were seniors. Three have already declared their departure from Texas. And while it wasn’t a particularly standout group, senior cornerbacks Josh Thompson and D’Shawn Jamison were solid anchors for a defense that lacked splash contributors.

That’s what Sarkisian and defensive coordinator Pete Kwiatkowski are looking for in the portal and in the incoming 2022 class: players that will not just be solid and play schematically sound but also win their matchups to make plays that change drives, whether it’s a sack, tackle for loss or turnover.

The other position where the coaching staff will focus on is the edge/outside linebacker position, which was already identified as a position of need last offseason when Sarkisian brought in three transfers: Ovie Oghoufo, Ray Thornton and Ben Davis. All three were — pause me if you’ve heard this before — solid, but nothing spectacular like NFL draftee Joseph Ossai the year prior. That’s what you get when you dig into the transfer portal for players who aren’t content with their current situation. At that position, improvement from current position players, most importantly Alfred Collins, and a large incoming class of defensive lineman is key for a Texas defense that sorely missed senior Jacoby Jones after he was out with a foot injury for a majority of the season.

Now that I’ve talked so much about the defense, where do you think could be the biggest change for the offense come opening day next year?

MB: I wouldn’t be surprised if there’s several new faces along the offensive line next year. It’s been no secret that the O-line has struggled this year with injuries, but the group simply lacks depth as well. Sarkisian and offensive line coach Kyle Flood have two offensive line commits in the 2022 recruiting class, and I also expect that to be a position that they attack in the transfer portal this offseason as well.

There’s also the looming question at quarterback. Sarkisian told us before the season finale that he would like to bring in more competition and open up the starting spot for next year. Junior Casey Thompson struggled in the second half of the season but dealt with a fairly significant thumb injury on his throwing hand that could be to blame. Redshirt freshman Hudson Card failed to secure the starting job this season as well, suggesting that he still has some developing to do. Will Sarkisian look to the transfer portal to bring in another starting-caliber quarterback to compete with Thompson and Card for the job? We’ll see what happens.

I wanted to take a moment to ask you about the frantic coaching carousel that has seen Oklahoma head coach Lincoln Riley depart for USC among other high-profile coaching changes at Notre Dame and LSU. How will all this affect Texas Football?

NH: The coaching changes help Texas in the transfer portal and in the recruiting trail. The one commit where it could play a big difference is 2022 offensive lineman recruit Kam Dewberry. His upcoming decision during Early Signing Day looks more favorable for Texas with the coaching change at Oklahoma. But Texas is still in the running along with Texas A&M and Ohio State with no clear favorite.

So that’s generally where Texas is affected by the coaching carousel: with a recruit or a transfer here or there this year. But the bigger, long-term change could come with future success or lack thereof for Oklahoma and LSU, specifically. If the new coaching staffs at those two programs can’t shape up on the field and on the recruiting trail, Texas will be a big winner long term.

But, the Longhorns have a host of their own problems that they need to fix before that potentially happens in a few years.

I think Sarkisian will have a bounce back year though, and a second year of continuity in the system and better quarterback and offensive line play could make a huge difference for his team. In my way-too-early prediction, I’ll take the Longhorns going 9–4 with a bowl win and high expectations for Sark’s second season.

MB: I, too, believe Texas will bounce back next year. It’s hard to imagine a tougher season. I don’t anticipate a Sam Pittman at Arkansas type leap in year two, but 8–5 with a bowl win seems doable to me if Sarkisian can get some solid depth built up this offseason.

Finally, I’d like to thank everyone who read these and followed along with Nathan’s and my coverage of Texas Football this fall. I think I can speak for Nathan when I say we’ve thoroughly enjoyed our times on this beat and are grateful to have provided the students’ perspective in our coverage of this season.