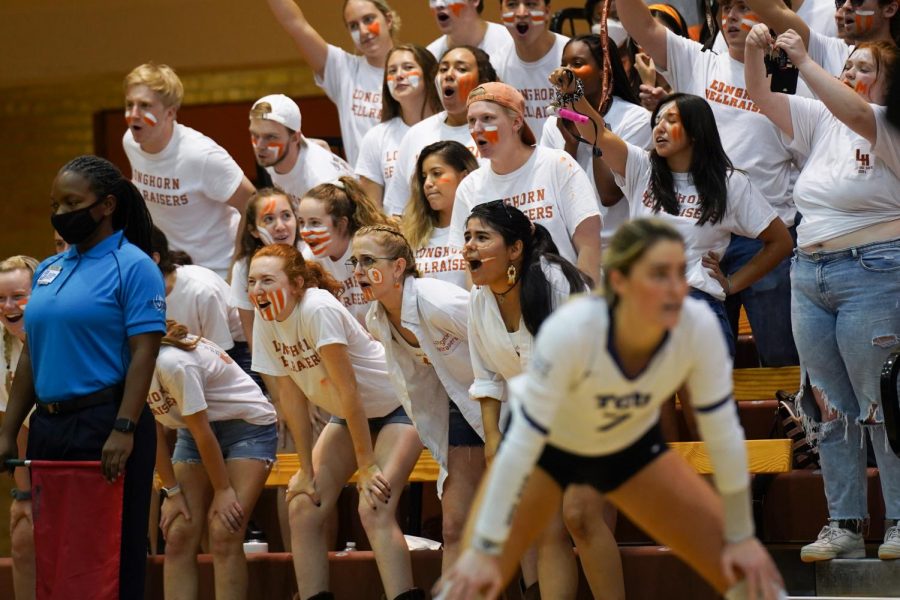 “Historically, we have not been able to sell out the first and second rounds, and we need to be able to do that,” Elliott said. “We are the last team playing with football out (of bowl contention), but (we’ve) got a chance to do something (special).”

Competing for UT comes with an expectation of excellence. As the previous winner of the Director’s Cup, students and alumni alike expect greatness out of their sports teams. Fans yearn for the tower to glow burnt orange in the Austin skyline and to see Big 12 Championship posts on their Instagram feeds.

No. 2 Texas volleyball has exceeded these great expectations where others, including Texas football, have not.

The team went 24-1 in the regular season, was the No. 1 team in the nation for 10-consecutive weeks and clinched the Big 12 Championship for the fifth consecutive season on Saturday.

The Longhorns are also seeded within the top four teams in the NCAA volleyball tournament, granting them home-court advantage through the first two rounds and regionals.

When faced with adversity, Texas volleyball seems to find ways to win. In their first match against Big 12 rival Kansas, the Longhorns dropped their first two sets against the Jayhawks in a struggle to get their offense firing on all cylinders. However, juniors Skylar Fields and Logan Eggleston jump-started their team that looked dead in the water, winning the final three sets of the match to beat Kansas in a reverse sweep.

Texas volleyball has been a bright spot for Longhorn fans during a disappointing football season.  This year, Gregory Gym sold out nearly every match in the tail end of conference play, and volleyball has won every home match this season. However, to maximize the team’s success, Elliott wants to see historical patterns broken.

“Longhorn fans need to get behind us and they need to show up (during tournament matches),” Elliott said. “It would mean a lot to have this gym sold out, our fans give us a big burst.”

In last year’s COVID-19 season that featured nearly twice as many games as a typical season, Texas persisted through challenges in addition to the pandemic, such as redshirt junior Asjia O’Neal’s return to the team following open heart surgery.

In wake of the hardship, the Longhorns grinded to the national championship game falling to Kentucky in a hard fought match.

This season, Texas volleyball returned nearly all of their starters in pursuit of a return to the championship, emerging as one of the most complete squads in the nation.

“One thing that’s so great about us is how balanced we are,” Eggleston said to ESPN. “When we are in system and passing well, it’s really scary to be on the other side of the net.”

No. 2 Texas volleyball’s first hurdle to the national championship is the first three rounds of playoffs, all of which will be played at Gregory Gym. The Longhorn’s first match will be this Thursday against Sacred Heart — a team coming from the less competitive Northeast Conference. If the Horns take care of business against the Pioneers, then they will face the winner of the San Diego-Rice game.

So long as there are no catastrophic hiccups in Texas’ gameplay, the team will likely move on to the regional round of gameplay, where the Longhorns can expect to play either No. 15 Washington, the Pac-12 champion, or Hawaii, the three-time national champion at Gregory Gym the following weekend.

While it’s a long road to Columbus for the Final Four, Texas volleyball plays best when the lights shine the brightest, and there has never been a bigger spotlight on the Longhorns.

“We’ve always risen to the challenges of the great teams, and we’ve got big names in front of us,” Elliott said. “It would mean a lot to have this gym sold out. It’s not asking a lot to be able to do that with such a phenomenal team.”