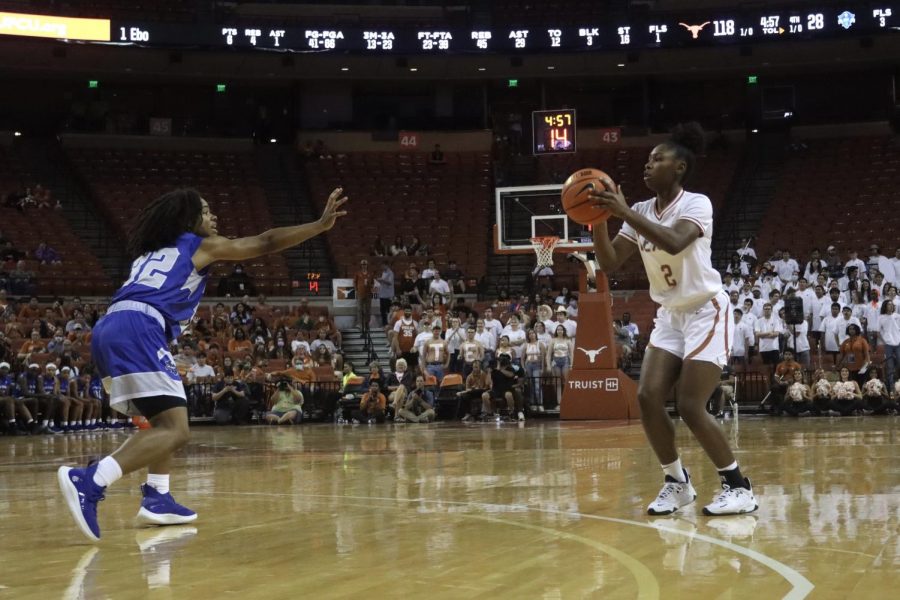 Coming off a strong 78-64 victory over Jackson State on Wednesday night, No. 15 Texas moves on to face one of the top teams in the nation: No. 17 Texas A&M.

The Longhorns come into this marquee matchup with a 5–1 record, including a 1–1 record against ranked teams and the sixth seed in the Big 12 division. Scoring at least 70 points in its past four games, Texas’ offense has come alive with contributions from senior center Lauren Ebo and junior guard Aliyah Matharu.

The team will look to carry that momentum into Sunday’s game as the Longhorns search for their second win against ranked teams on the season. Here are three things to look out for as Texas takes on the Aggies in College Station:

Can Texas’ offense keep up with A&M’s shooting?

Texas may need to turn to senior guard Joanne Allen-Taylor for some 3-point shooting contributions Sunday. Allen-Taylor has hit at least one 3-pointer in all but two games this season and has been a steady contributor to the scoreboard throughout the year.

Another player to keep an eye on is freshman Kyndall Hunter. The guard has been out for over a week with an injury, but if she can return for the game this upcoming Sunday, it can open up the floor for the Longhorns. Hitting seven threes in the season opener, Hunter has proven that she can be lethal from the 3-point line.

Can Rori Harmon get back on track in the scoring department?

Shooting well under 50%, freshman guard Rori Harmon has struggled to score the ball in the past three games. That will need to change Sunday, since A&M is a team that can run up the scoreboard with its efficient shooting.

The Longhorns missed her scoring heavily in their overtime loss to Tennessee where she went 3-16 from the field. Harmon hasn’t been shooting inefficient shots in this three-game slump — it looks like she’s getting to her spots and the shots just aren’t falling. Those shots will need to fall against the Aggies if Texas wants to come out with a win Sunday.

Can Aliyah Matharu continue to score at a high rate?

Matharu has been playing well for the Longhorns during Hunter’s absence with games of 13 and 27 points. If Hunter can’t go once again for Sunday’s game, Matharu will be relied upon to fill in the scoring void.

The junior guard has the ability to spread the floor and has been getting better at limiting turnovers when she has the ball in her hands. Matharu showed in her 27-point game that when she’s got the hot hand, she can light up a defense.

That could be the case against the Aggies as their defense could be focused on stopping Texas from attacking the paint, leading to open shots around the three-point line where Matharu is best. Look for her to constantly find her shot on Sunday.