No. 7 Texas stifles sister school UTRGV in second half for sixth win of season 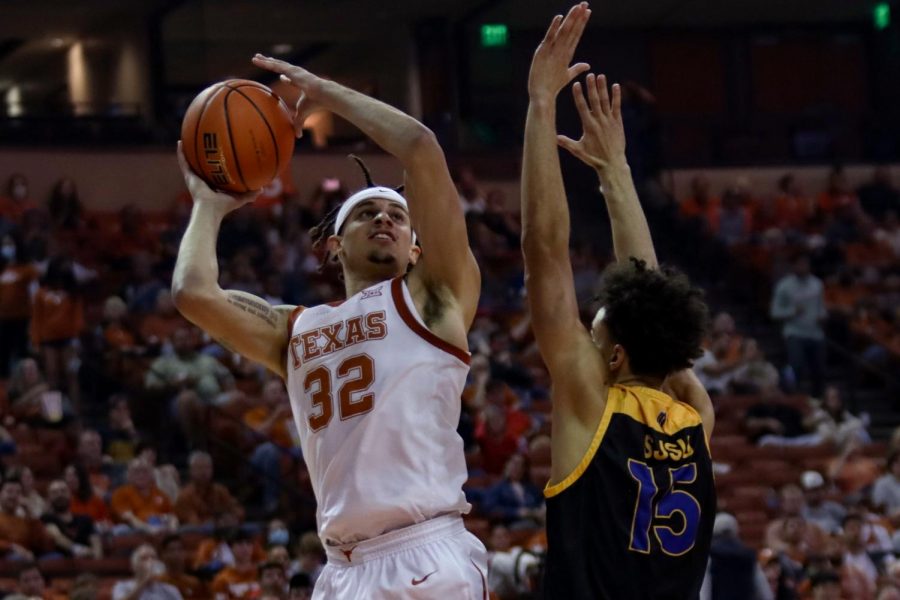 If you showed up to the Texas men’s basketball game Friday night for the second half, you would have seen the Longhorns romp another unranked team for the fifth time in a row. Business as usual.

But if you left after the first half — maybe to watch Texas volleyball host Rice in the NCAA Tournament — you’d have wondered whether the Longhorns could stave off an upset from their own sister school.

Off the back of an early barrage of burnt-orange 3s, Texas built and maintained a comfortable lead during the opening throws of the game. But UTRGV quickly responded in kind, going 5-8 from deep in the first half.

Texas head coach Chris Beard took a moment after the game to credit the Vaqueros for the energy and poise they showed in a 12-5 run over the last five minutes of the half.

“I’m not gonna sit around and let the narrative be, ‘We just didn’t play well,’” Beard said. “I mean we tried, our guys were dialed in. … A lot of respect for Rio Grande Valley in the first half. ”

By halftime, Beard and his squad were clinging to a slim 46-41 lead.

Whatever locker room speech he gave must have worked wonders.

The second half saw the Longhorns dominate every aspect of the game. Their defense smothered the Vaqueros in and outside of the paint while their offensive pieces sang on time and in rhythm. The pressure was on, and Rio Grande Valley systematically collapsed on both sides of the ball.

Beard’s defense found every way possible to keep the ball out of their opponents’ hands as Texas held the Vaqueros to a measly five points through the first 12 minutes after the break. The Longhorns finished the half with 16 points and a ludicrous 13 turnovers.

As usual, there were many pieces that played a part in the Longhorns’ success, but the big men found a way to shine the brightest. Junior forward Tre Mitchell recorded 13 points, five rebounds and a career-high five assists to match. Senior forwards Timmy Allen and Christian Bishop combined for another 30 points.

After the game, Bishop credited the second-half turnaround to his team’s focus in remembering their identity.

“I mean we’ve had this defense every single day,” Bishop said. “(It’s about) going out and doing what we do. Knowing our expectations and ourselves.

“It’s just a lot of togetherness. You can’t have four people playing defense and one person not. We have to be on the same page and just work on the strings together.”