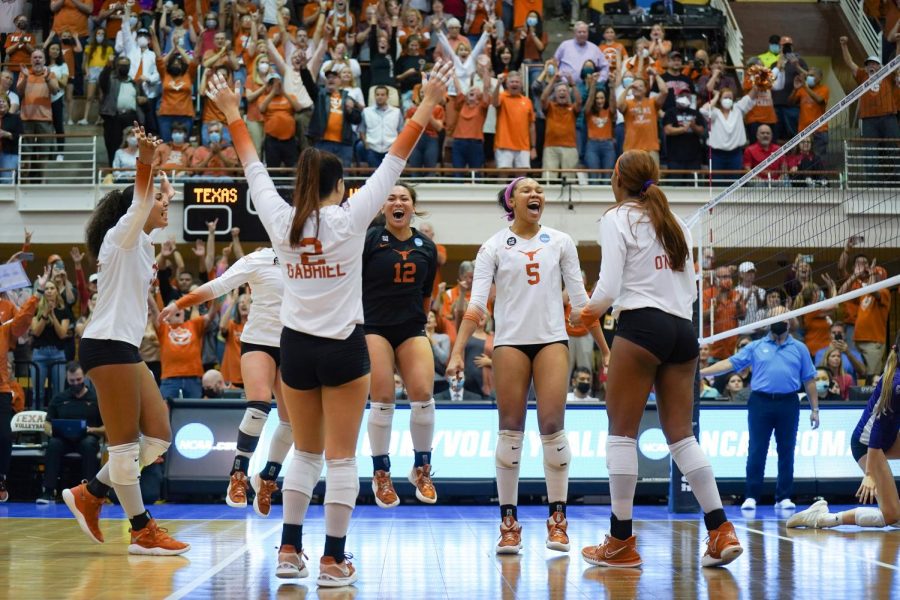 “We were far from perfect in Games 1 and 2,” Elliott said. “It’s about learning how to win ugly and grinding it all out.”

That’s exactly what Texas did: storm back from the two-set deficit to win 3-2 over No. 15 Washington to advance to the Elite Eight. For the Longhorns, the momentum shift didn’t take a change in type of rotation or even mindset, but rather the thousands of Texas fans packed into Gregory Gym getting on their feet.

As the Longhorns returned to the court from Elliott’s huddle, fans rose from their chairs and sang along with the pep band that played “Texas Fight” in the midst of the chaos. By the time the Huskies stepped back onto their side of the net, the crowd was deafening.

Washington libero Lauren Bays stood in the back court and served into the net. With the announcement of the Texas point, Gregory Gym exploded.

All season, Elliott and his athletes have stressed the importance of playing in front of a home crowd. Once the Texas crowd got energized and the Longhorns rallied behind their fans with improved play, there was little Washington could do to take back momentum.

“There’s so many different ways that you can switch momentum and obviously the crowd that we had adds (a) ton of pressure,” Elliott said. “Teams are not used to that overwhelming pressure from (fans). (With that) we started controlling the ball. … It opened up some seams for our left-side hitters. (The crowd) just did a phenomenal job to get that going.”

After struggling for the first half of the match, opposite hitter Skylar Fields became rejuvenated with the increased energy of the gym. Following the Texas timeout in the third set, the junior sank 10 kills on the match and helped kindle the largest deficit the team had seen this season.

“(During the timeout), I told them that this is about everybody taking care of the job and making sure we looked each other in the eye and it got going,” Elliott said. “(Fields) got going, and then everything else changed.”

In the fourth set of the match, the Longhorns built on the momentum that propelled them to win set three. With the combined efforts of junior outside hitter Logan Eggleston and Fields, Texas boasted  a new feisty personality that Washington hadn’t seen during the match. Following two massive scoring runs, the Eggleston- and Fields-led Longhorns won the fourth set 25-9 to take the Huskies to a fifth set.

By then, the game was Texas’ to lose. Despite a handful of service errors, the Longhorns secured the victory with a final kill from Fields.

For the 15th time in 16 years, Texas volleyball will return to the Elite Eight and play the winner of the Nebraska-Illinois game. But for veteran players such as setter Jhenna Gabriel, the Elite Eight is the bare-minimum expectation.

“We’re not a Sweet 16 team,” Gabriel said. “We’re a national championship-winning team, and I think that’s exactly how we ended up playing tonight.”