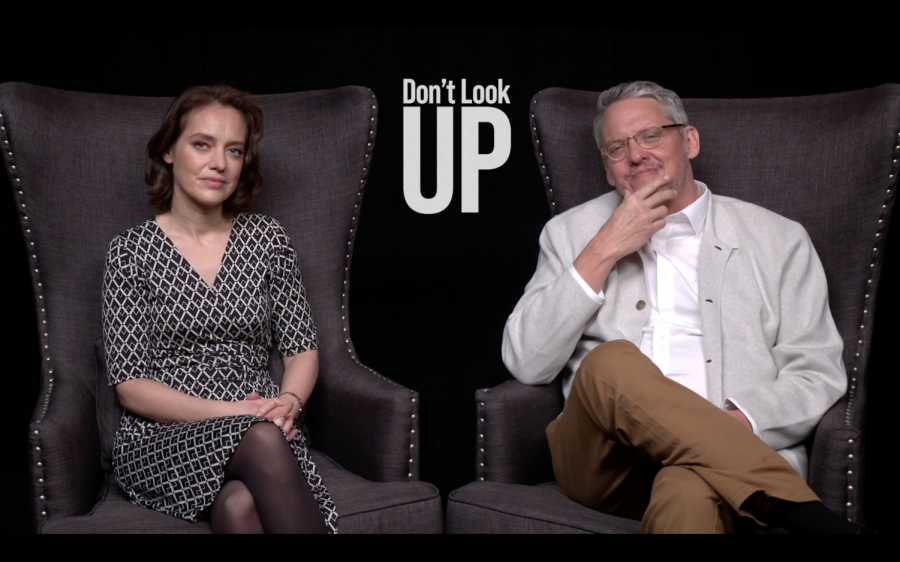 Dr. Amy Mainzer and Adam McKay during the roundtable interview.

“Don’t Look Up” brings Hollywood legends together for a comedic, yet dark take on the end of the world. Starring Leonardo DiCaprio, Jennifer Lawrence, Meryl Streep, Ariana Grande and more, the new Netflix film follows a duo of young scientists (DiCaprio and Lawrence) as they struggle to tell the world that a comet is headed directly for Earth within the next few months. Director/writer Adam McKay crafts a razor-sharp social commentary about the puppet-mastery of the wealthy through social and political channels when it comes to dealing with a potentially life-threatening event.

The Texan participated in a roundtable interview with McKay and Dr. Amy Mainzer, who advised McKay through the production process to ensure his scientific story was as accurate as possible.

The Daily Texan: Adam, with such an impressive cast was it ever intimidating as a director to work with these acting legends?

Adam McKay: These actors are legends because they are incredible actors. Right away, it means they know how to collaborate, they know how to communicate, ask amazing questions, they know how to be in a scene and use give and take. It actually was a luxury, it took a lot of stress off making this movie because we were making the movie during the pandemic before there was a vaccine developed so it was an incredibly difficult filming situation but because we had all of these tremendous actors it made it doable.

DT: What was it like working with Ariana Grande to craft her pop-star character in the film?

McKay: The secret to Ariana — she’s really cool. She really gets it, she’s incredibly grounded and funny. One of my favorite moments in the movie is towards the end of her song when she starts “We have to listen to the qualified scientists, we’re all gonna die,” she improvised that! I think we think of Ariana Grande as this kind of pop star but I believe she supported Bernie Sanders in the last election. She totally gets it. She is totally on the same page. Dealing with her and Kid Cudi, the level of awareness from those guys is far deeper than you would think. So they loved it. They loved mocking this bizarre obsession that our culture has with whose faces are on magazine covers and on TV. And by the way, I’m not judging that cuz I do it as well. I’m very curious how Russell Westbrook is going to fit with Anthony Davis and Lebron James. And if you really think about that, that’s crazy. I’m 53 years old. Yeah, Ariana just totally got the joke right from the jump.

Amy: How often do you have a song that talks about, “Listen to the goddamned qualified scientists!” It’s pretty great.

McKay: It’s pretty insane. I think Justin Timberlake had one song about the empirical peer review process. But other than that, there hasn’t been a lot of … hahaha.

Amy: I think we need the album. We need the science album next. I would love that.

McKay: Christian Aguilera I think had a big hit that was all about control tests.

McKay: She had like 3 songs about calculus that were really big.

Amy: It helped me study.

Kelsey Simpkins, University of Colorado Boulder:  How did you come about to approach the emotional journey of these scientists through the movie and what were your goals in presenting that?

McKay: That was the center of the movie. I know some of the climate scientists, friend of mine David Korn wrote a great piece about climate scientists who are experiencing depression … Scientists aren’t PR people, they aren’t marketing. They bring the information. And when you bring that information to a corrupt system, to a distracted system, to a system that’s driven by careerism rather than the truth, I feel the frustration but I can’t imagine for Amy what that must feel like.

Amy: That’s kind of one of the things for me that was important to portray in the film — is scientists are human beings and so often in film and television we see scientists as kind of a caricature. They’re either clowns or they’re just plain evil. They are not really shown as human beings who are sometimes given to know bad news because of their work … We’re usually not the people who are in power to actually make the changes that we know need to happen in order to fix the problem so all we can do is stand there like the greek myth Cassandra just saying, ‘Hey, this is gonna happen, this is gonna happen.’ There’s a tension in the movie, that we talked about a lot, and that I really appreciate how it came out between styles of different activism … If you are the person that learns the bad news what is your job? What do you do? Do you stand outside holding a protest sign, yet knowing that you are not in the room with the people who can actually effect change … Is your responsibility to stay in the room with people who you may profoundly disagree with? That struggle was something that I thought was also important to portray.