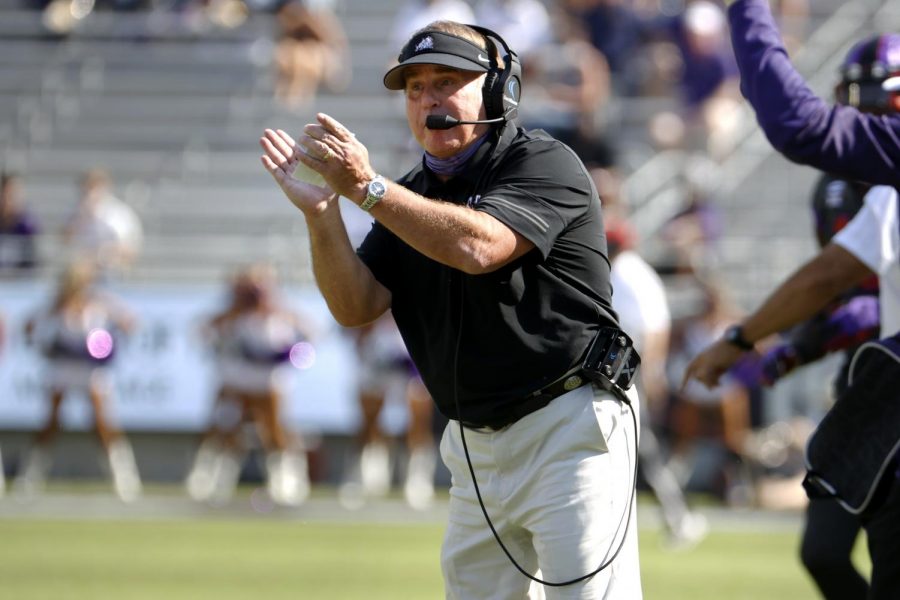 Under TCU head coach Gary Patterson, the Horned Frogs have defeated Texas in seven of their nine matchups since joining the Big 12 in 2012. Patterson is nothing but influential in the rebirth of TCU Football.

After joining TCU in 1998, Patterson’s 21 seasons in college football make him the nation’s second-longest tenured head coach. Added to his resume are 22 national coach of the year honors and a 26–3 record as an AP top 5 team, the second-best mark nationally.

Patterson looks to secure a win in the Horned Frogs’ first conference game on Saturday after beating the Longhorns 33-31 last season. Texas, which is currently riding off two wins with a confident quarterback in Casey Thompson, may give Patterson and team a run for their money.

At Patterson’s side is a deep coaching staff acting as both analysts and support systems to aid the 125 players mentally and physically. Patterson believes he has as solid of a foundation as anyone could have in college football right now, stating his staff focuses on every detail to better the team’s continuity.

Patterson differs from his Big 12 conference rivals by focusing on defense among a modern day offensive revolution. His defensive acumen dates back to his playing days at Kansas State as both a safety and outside linebacker in 1980 and 1981. In 1984, Patterson took over at the linebacker coaching position at Tennessee Tech while earning his master’s degree in educational administration.

From 1996 to 1997, Patterson spent two seasons as the defensive coordinator and safeties coach at New Mexico before arriving in Fort Worth in 1998 as an assistant coach. Patterson took over at the helm as the head coach for the Horned Frogs in 2000, utilizing his skills acquired in multiple conferences to create defensive schemes sought out by NFL coaches.

Defense is reactive in nature, but Patterson flipped that idea. Patterson treats his defense like an offense, forcing opponents to acclimate to TCU’s style of play rather than vice versa.

Running a 4-2-5 defense, Patterson controls the field with three safeties and dictates calls from the back to front instead of the front to back. With the triple option, Patterson plays man-on-man coverage, causing chaos for opposing offenses, something that could be a concern for a young Texas offense headed by a new starting quarterback in Thompson.

Losing five defensive starters to the 2021 NFL Draft, Patterson has scrambled to rebuild his defensive line. Patteron’s toughest task was finding someone to fill the shoes of now-Houston Texans linebacker Gary Wallow. Wallow was drafted to the Texans in the fifth round, but with three TCU players now backing up at that position, Patterson isn’t worried.

During Patterson’s second season in Fort Worth, he groomed the highest TCU draft pick in LaDainian Tomlinson, who was drafted as the fifth overall pick by the Chargers in the 2001 NFL Draft. Tomlinson was inducted into the Pro Football Hall of Fame in 2017 with 163 career touchdowns and 13,684 rushing yards.

Patterson has coached 263 all-conference selections, 18 first-team All Americans and has led 55 players to the NFL.