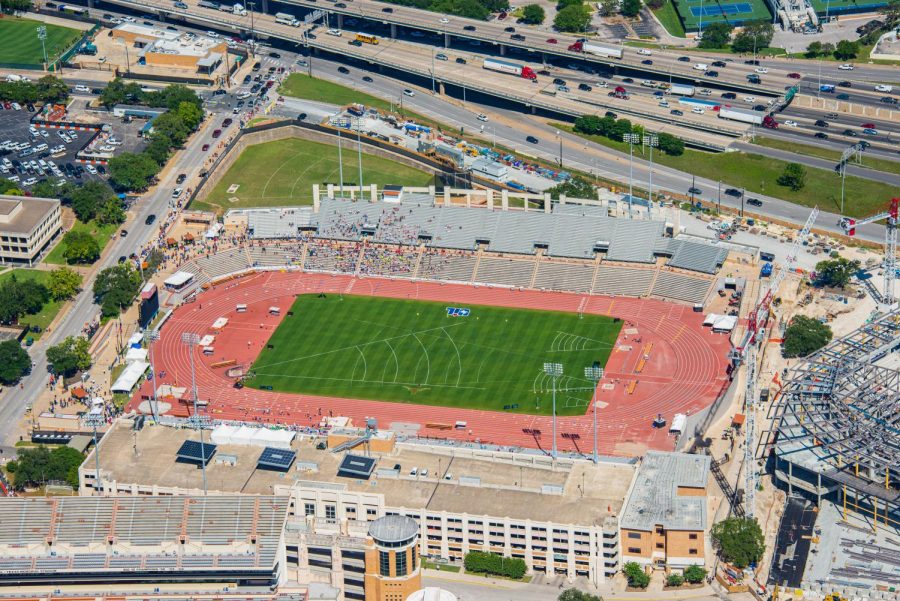 Editor’s Note: This article first appeared in the October 11 flipbook.

Richard Duncan knows the underdog story all too well.

A 6-foot-3-inch NBA wannabe transferring from Canada, who was thrown into track and field due to his mother signing him up at the age of 10, surely wouldn’t become anything more than just another face in a sea of shiny new recruits.

But 60 phone calls and eight scholarship offers later, Duncan found himself to be a diamond in the rough of college athletes, accepting a partial scholarship from Texas to join their track and field team.

“People just assume that certain athletes are going to be great forever when they get out of high school, that they’re always going to be number one. But what’s great about sports is that you can change that outcome,” Duncan said. “It may not happen in one year, it may happen over several years, and for me, I came in as not knowing anyone and no one knowing me, to making a splash and continuing to get better every year.”

And that splash created one massive ripple in the fate of Duncan’s athletic career: he became the only athlete in NCAA Division 1 history to receive All-American honors in the triple, long and high jumps in the same season.

In recognition of Duncan’s athletic career, he will be inducted into the Texas Athletics Hall of Honor this Friday as one of 10 honorees.

As an eight-time All-American, two-time Olympian and three-time World Championships qualifier, greatness seemed to be in his blood. Yet the secret to his success comes from the mentality of it all, according to Duncan.

“There were a lot of people that said, ‘Oh, the athlete you could be if you only did one event, imagine how good you could be,’ and I decided that I didn’t have to listen to them,” Duncan said. “I didn’t have to be who they wanted me to be, I wanted to be different and I knew that I could do it and I knew that I was capable. I’ve trained with some people that were phenomenally better than me physically, they were more talented than me and I’d beat them every time.”

Now a father to three boys involved in sports and the assistant coach of his six-year-old’s hockey team, Duncan hopes to inspire the next generation of unknown underdogs with his perspective.

“I always used to take a bad omen and take out the positive in it and use it as motivation,” Duncan said. “That’s kind of the mental part that I try to pass on to the kids; the coaches are going to coach and give them all the skill stuff, but very rarely do coaches give kids mental strength.”

Corey Cotton, Duncan’s former roommate and lifelong best friend on the team, will be attending the Hall of Honor induction ceremony to celebrate his teammate’s historical accomplishments.

“What I think everyone loved most about Rich was that you weren’t going to outwork him,” Cotton said. “He wasn’t just going to motivate you by telling you what to do, Rich was willing to put in the work as well, and that meant everything from practice to eating right to being the cheerleader.”

The two have been friends for over 20 years and will reunite with their fellow teammates this weekend to make a toast to Duncan’s well-deserved success and to relive their memories as Longhorns.

“For our era, there’s no other person more deserving than him,” Cotton said. “I’m a little biased, since I was one of his best friends and roommate, but he’s deserving because his numbers say so.”

Despite the 42-year-old’s athletic background, Duncan now finds himself working in Los Angeles as the CEO of BIOlympic Medical Distribution. However, he still holds onto the mindset he created during his time at Texas and keeps it with him, no matter what life brings.

“Sports is really just preparing you for life,” Duncan said. “All of my experiences translated later on to just no one being able to tell me, ‘You’re not capable of doing this,’ or ‘No one’s done this before, you’re not good enough to do it.’ All those things don’t enter in my world.”