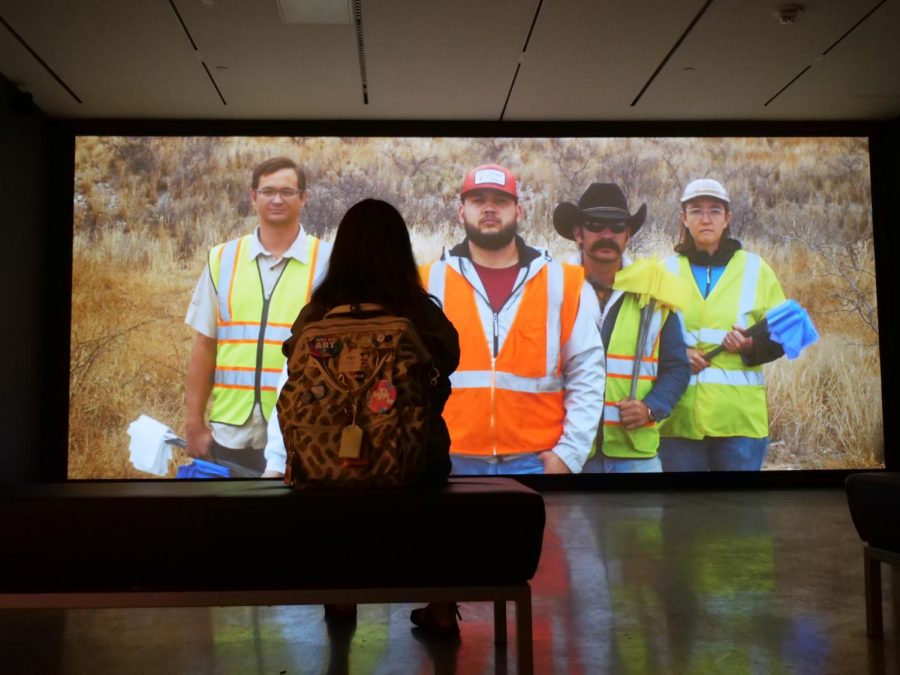 A variety of objects — toolboxes, rulers and construction vests — are suspended from the ceiling of the Visual Arts Center’s first exhibition room, greeting visitors with a truly eye-catching installation. Artists-in-residence Carolina Caycedo and David de Rozas’ exhibition, “The Blessings of the Mystery,” features a series of engaging works such as this one.

On display until Dec. 3, the exhibition explores themes of Indigenous rights, environmental activism, memory and the shaping and spreading of knowledge with a geographic focus on West Texas, according to the center’s website.

Organized by Ballroom Marfa, a nonprofit art museum in Marfa, Texas, “The Blessings of the Mystery” will travel to the Rubin Center for the Visual Arts at UT El Paso and then go to Ballroom Marfa, Caycedo said. De Rozas said the ways memory and historical memory exist in specific places in West Texas inspired him and Caycedo.

“Many of the artworks that were made for this exhibition explore the history of Texas and the relationship with the landscape and with native lands,” de Rozas said. “We were interested in speaking about how native lands were privatized and sold and basically stolen for a matter of profit.”

In addition to the many suspended objects, an installation entitled “Measuring the Immeasurable,” the exhibit features “Halving and Quartering,” a work consisting of service flags, stakes, tape and spray paint spanning the entire wall behind the installation. This work demonstrates the Public Land Survey System, which divided the Western territories of the United States into sections to help with the sale of land. These pieces complement an intriguing drawing entitled “Somi Se’k” and a series of photographs, both depicting numerous areas in West Texas.

Caycedo said everyone, Texans and UT students alike, would benefit from giving more attention to Indigenous premises, knowledge and experience.

“Within my own process of decolonization and kind of opening up to non-western epistemologies and knowledge, was a profound conviction that within that knowledge lies clues to come out of the crisis that we are in right now as humanity — the climate crisis, the inequality we experience as a society,” Caycedo said.

The exhibition also includes works from special UT collections such as watercolor paintings from the 1930s. Also, the Biodiversity Collections and the Billie L. Turner Plant Resources Center loaned extinct and near extinct species of plants and animals to the exhibition, according to the center’s website.

“(The exhibition) to me seemed like a really great project to kind of bring some of those ideas and some of those histories to the forefront in the foreground of our thinking,” Stevens said.

Caycedo and de Rozas will be participating in a live recording of the “Chrysalis” podcast, hosted by John Fiege, an assistant professor at the University at Buffalo SUNY and former UT lecturer, at the G.B. Dealey Center for New Media on Oct. 27. This will be followed by a roundtable discussion Oct. 28 featuring the artists, along with Martha Menchaca from the Department of Anthropology; Fred Valdez, director of the Texas Archeological Research Laboratory; and Juan Mancias.