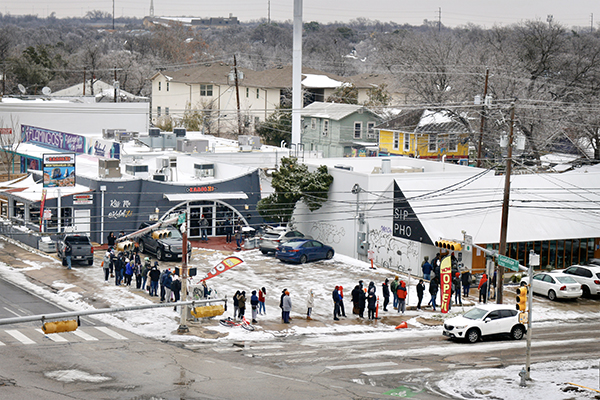 In response to University food shortages during February’s historic Winter Storm Uri, UT plans to release guidelines for how to best operate during power outages that decrease food availability in dining halls.

UT’s renewed focus on disaster preparation addresses points raised in the city of Austin’s  Winter Storm Uri After-Action Report & Improvement Plan Technical Report, which evaluated issues the community faced after February’s weeklong storm. In their report, the city recommended creating a food-supply preparedness plan if the city’s greater food supply-chain is affected by a disaster. University Housing and Dining will create new plans on how to maintain ample food and water as well.

During the storm, dorm residents saw a decrease in food available at the dining halls since  delivery trucks were unable to drive on the frozen roads, said Mynor Rivera, director of dining operations. University Housing and Dining also lacked water needed to clean and prepare food. Now, the dining halls are keeping around 20 barrels of water on site reserved in case of a similar emergency, Rivera said.

Since the plans will not be complete until early December, Rivera said he couldn’t discuss the full details.

“Part of the plan is to bring trucks with cooling packs,” Rivera said. “So if that happens again, we have somewhere to place food.”

In their report, the city also recommended agencies continue to implement public messaging for resident health and safety considerations in disaster scenarios.

Similarly, University Health Services partnered with the telehealth service MD Live, which can act as an alternative source of help in another emergency situation if local doctors can not be reached, UHS’ executive director Terrance Hines said.

“We want to take into account any best practices,” Hines said. “The city of Austin and Travis County have been great partners, particularly through the pandemic.”