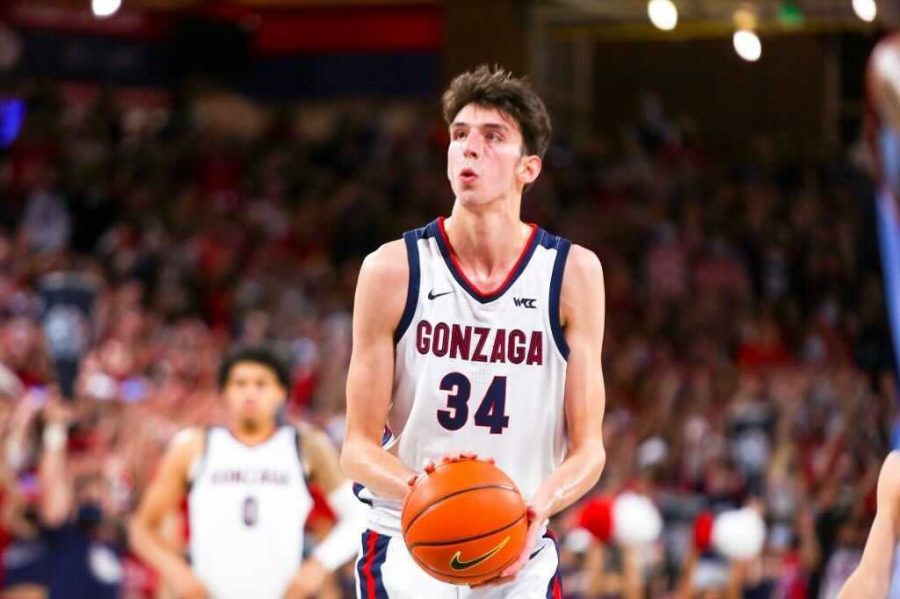 Editor’s Note: This article first appeared as part of the November 12 flipbook.

This Saturday, No. 5 Texas travels to Spokane, Washington, to take on the No. 1 Gonzaga Bulldogs. The contest has serious implications for March Madness projections and will serve as a good test of both teams’ potential. Here’s a scouting report exploring what the Longhorns are going up against.

Gonzaga head coach Mark Few returns for his 22nd season at the helm with a trove of accolades under his belt. He is a two-time Naismith College Coach of the Year winner and the reigning recipient for the 2020-21 season. Few has reached the NCAA Tournament in every one of his 21 seasons thus far, and boasts the highest winning percentage for a coach with over 600 games (a staggering 0.834). The only thing left to consummate his career is a national championship title.

For the past couple years, Few maintained personnel continuity in his coaching staff, juggling a small set of assistants around to various positions. While Gonzaga’s on-court talent has changed, it’s safe to say they still have a championship-caliber sideline crew.

Replacing a team second-best of 18.6 points per game, a team high of 31.8 minutes per game and a remarkable 44% shooting from three is a daunting task. Fortunately for Gonzaga, a strong slate of new and returning talent looks like it could keep their frontcourt running at full tilt.

All-American forward Drew Timme looks to retain his spot as the team’s leading scorer with his versatile skill set and high basketball IQ. A prolific scorer in both the low post and mid-range, Timme continues to improve his capabilities and show he can shine as both a role-player and a go-to scorer.

Freshman center Chet Holmgren showed great promise in his college debut against Dixie State. The 7-foot, 195-pound teen flexed his prodigal shot-blocking with seven rejections against the Trailblazers. He is unusually agile for his size and can shoot from practically anywhere on the floor. However, his lanky frame invites speculation as to whether he can sustain his dominance against more physical competition.

Anton Watson also looks to return as a solid role-player for the Zags. He’ll likely see a spike in playtime as Gonzaga finds the best lineup to match last year’s frontcourt production. If he shows improvement over last season, he may even earn himself a starting spot on the roster.

Gonzaga’s roster losses are a little more serious in the backcourt. Losing both Jalen Suggs and Joel Ayayi to professional basketball means the Zags dropped three of their top four scorers from last year. Suggs’ electrifying freshman performance was crucial to their championship run.

The No. 5 NBA draft pick was the de facto leader of his team and a generational talent. A primetime scorer who doubled as an elite floor general, Suggs’ absence leaves a hole his former teammates now have to fill.

Ayayi, while not as talented as Suggs, was almost equally important to Gonzaga’s success. He racked up 31.3 minutes per game as a solid scorer who could rebound and shot a consistent 39% from three in his final year.

Despite having his backcourt talent siphoned by the NBA, Few recouped his losses yet again with an impressive pair of recruits.

Point guard Nolan Hickman was the fifth-ranked recruit at his position. He plays with a fluid poise, emulating a Kyrie Irving-style scorer, and has decent court vision. Hunter Sallis is an athletic 6-foot-5-inch, 175-pound versatile guard who could pose a serious all-around threat if he gains some weight.