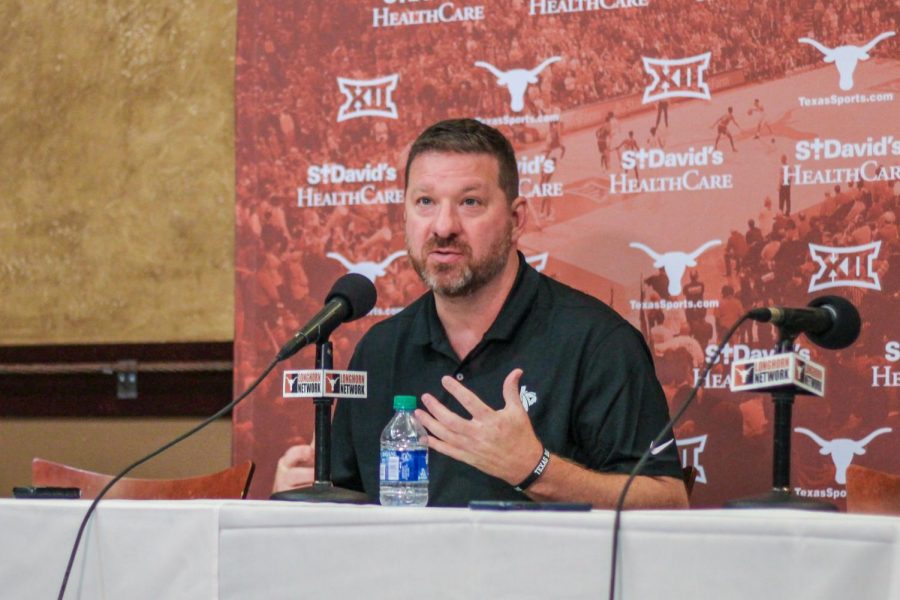 As the men’s basketball season officially tips off Tuesday, The Daily Texan took a look at six major storylines to watch in the Chris Beard era.

Although most of the buzz surrounding the Longhorns during the preseason has been about how well they can perform, there is more than a possibility for Murphy’s Law to apply to another Texas sports team. Almost everything that could go wrong for the football team has gone wrong, and all eyes are on new head coach Chris Beard’s roster to not suffer a similar fate as Sarkisian’s team.

As talented as the Longhorns roster is and as accomplished as Chris Beard is, anything that can go wrong could go wrong for this team. The Texas men’s basketball team ended the 2020-2021 season in a morbid and unexpected 53-52 loss to the Abilene Christian Wildcats.

The final game of the Shaka Smart era was an offensive disaster marked by poor shooting and an absurd 23 turnovers. Even though most of last season’s roster has moved on, the air of past failures still lingers. The curtain falls on Tuesday night as Texas makes a stab to kill the narrative of being a team that is good, but just not good enough.

Barring any potential curses, flops and jinxes Texas seems unduly prone to, this year’s team could truly be something special. Beard’s victories in the transfer portal have awarded him a wealth of talented players this school has rarely ever seen.

Forwards Tre Mitchell and Timmy Allen entered the portal as two of the best big men in the country, and they both left suiting up in burnt orange. Sixth-year Longhorn guard Andrew Jones and transfer guard Marcus Carr were both just named to the Naismith Trophy watchlist. Other star transfers like guard Devin Askew and forwards Christian Bishop and Dylan Disu combine with solid Texas holdouts like guards Courtney Ramey and Jase Febres to round out a team with enough starpower to earn a trip to Louisiana for the Final Four.

Right now, Beard seems to have all his players’ egos in check. The true test for this team will be maintaining continuity down the stretch. It’s safe to say, however, that if the coaching staff can make all of its talented pieces sing in tune and on time in March, Texas men’s basketball should have an exciting year in the books.

As Baylor looks to defend its 2021 national title, the Big 12 sits wide open for the taking. Purely based on preseason predictions, the main contenders for the Big 12 title are Baylor, Kansas and Texas.

Kansas sits among the blue bloods of college basketball, sharing similar levels of consistency and accomplishment as UNC, Duke and Kentucky. Seeing the Jayhawks as a Big 12 title favorite is no surprise. Baylor came into this season with a target on its back as the reigning NCAA Champion. The Bears were clearly unfazed by the missed opportunity for last year’s Big 12 title as they mauled their way through the competition and handed No. 1 Gonzaga its first loss in the NCAA Championship game.

The Longhorns must be able to defeat the college basketball royalty that is the Jayhawks and unleash the bear spray on Baylor to truly prove themselves as a legitimate March Madness threat. Texas clearly has some worthy opponents to keep its eye on as the Longhorns look to keep their Big 12 title and more importantly, make a postseason run at the NCAA Championship.

While conference play does not begin until January, one of the most contentious matchups that sits on the Longhorns’ plate is the Feb. 1 game against the Texas Tech Raiders in Lubbock. Texas AD Chris Del Conte struck a deal with Beard in a Comfort Inn in Plainview over McDonald’s breakfast in early April, silently snatching the coach that took the Raiders to the 2019 national championship game against basketball heavyweight Virginia.

Needless to say, Lubbock was not pleased with Beard’s decision to move on. To add insult to injury, redshirt senior guard Avery Benson and top-50 recruit and current freshman Jaylon Tyson followed Beard to Austin. The environment at the United Supermarkets Arena come Feb. 1 will probably be one of the most hostile conditions that the Longhorns will experience this season.

The biggest test of the season…in November?

In every poll across the country, Texas has earned a spot among the top-ranked teams in the nation. Across all of those same polls, however, Gonzaga clinches the No. 1 ranking. The Bulldogs are also the consensus favorites to win the national championship, again. An embarrassing meltdown against Baylor in the championship game last year, which ruined Gonzaga’s chance for a perfect 32-0 season, forged through the fires of national criticism a team with an unwavering resolve and a singular objective: win it all in 2022.

Texas and Gonzaga will spend their second game of the season duking it out at the McCarthey Athletic Center in Spokane, Washington. For the Zags, this game will be first in a slew of matchups against teams ranked in the top 25. For Texas, Saturday could be the only major contest before Big 12 conference play tips off on New Year’s Day.

Goodbye to the Frank Erwin Center

While the Erwin Center will still be around for the foreseeable future for concerts, comedy acts, musicals, trade shows and practically every other event you can imagine, the 2021-2022 season will officially mark the last time the University of Texas plays basketball in the fabled arena.

Thankfully, Beard seems like just the right coach to give the Frank Erwin Center the send-off it deserves. His relentless PR efforts drove an all-time record in season ticket sales, topping the previous mark of 8,882 set in the 2004-05 season, and his student outreach initiatives have sparked a fire of intrigue among the student body.

If the Longhorns live up to their highest expectations this season, the last squad to suit up in the Frank Erwin Center could be the best.