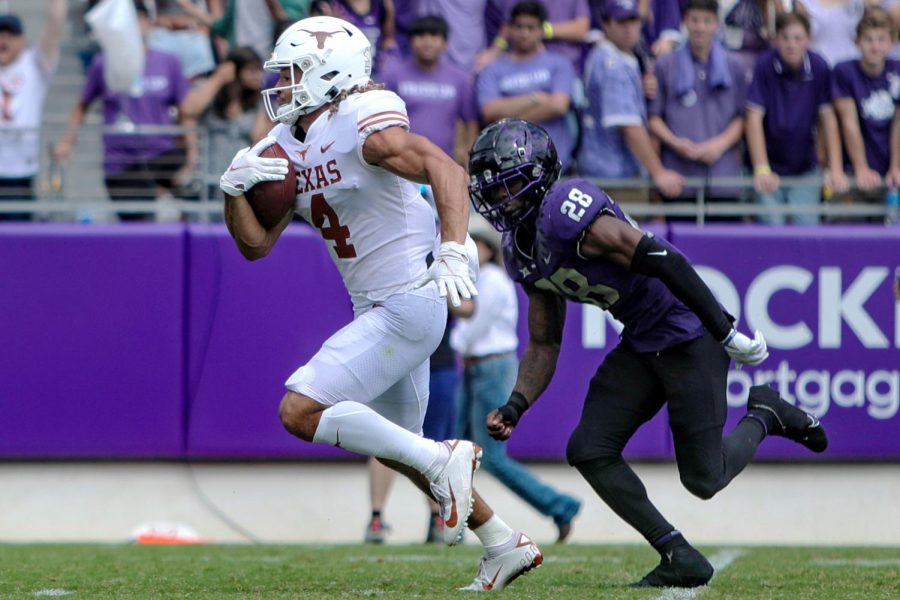 Since Jordan Whittington’s father passed away in October, the Texas wide receiver said returning to football has been a tough, back-and-forth decision.

The redshirt sophomore suffered a broken clavicle against Oklahoma on Oct. 9. But last week, Whittington said his decision regarding his return to football was bigger than showing out on the field.

“Do I think I could come back and play?” Whittington said Nov. 11 in his Orangebloods Youtube show. “Physically, yes. Mentally, where I’m at, I’m not sure.”

One week later, Whittington made his decision. On Thursday, head coach Steve Sarkisian said the wideout would play in this Saturday’s game against West Virginia but didn’t offer any further details.

It’ll be the first time Whittington plays since the passing of his father, Quincey, on Oct. 29.

“I’ve kind of found peace in it because the weekend of the Oklahoma State game, he came down here (with)y family,” Whittingtonsaid to Orangebloods. “We all got to spend time together. It was kind of like the timing of it was right.”

Whittington comes from a long line of football players.

The redshirt sophomore from Cuero, Texas, was the latest Whittington to star at Cuero High School, where his father, along with uncles and brothers, played.

One of his uncles, Arthur, won a Super Bowl as an Oakland Raider in 1981.

Whittington brought his family’s football legacy to the Forty Acres, where he arrived in Austin as one of the Longhorns’ highest-rated and most hyped recruits in recent history.

It wasn’t just his athletic ability that generated all the buzz.

“He’s very smart,” redshirt junior quarterback Casey Thompson said. “He even can tell other receivers what to expect and how to line up and all that. He really does a good job of having a high football IQ and seeing the defense. Somehow, he always ends up running the right routes and getting open.”

His intelligence and penchant for finding soft spots in zone defenses made Whittington a reliable third-down target for Thompson. In his six games this season, he’s converted nine third downs on 11 receptions for 194 yards.

But the wide receiver, who switched positions to running back his freshman year before switching back outside the next year, has spent more time injured than not in his Texas career. A re-aggravated groin injury took him out during his freshman year. Hip and knee issues only let him play in five games his second year.

Then, it was the broken clavicle. And most recently, it was the passing of his father that potentially delayed his return to the football field.

“A lot of football is mental,” Whittington said to Orangebloods. “That’s the most important piece of it.”

According to his teammates and coaches, Whittington  is one of the top players on Texas when it comes to the “mental” side of football.

But no matter whether he plays one snap or jumps back into his near-every down role on offense, it’s the mental side outside of football that’s the most important for Whittington.

“I want to make sure I’m good up here before I try to go out there and do something,” Whittingtonsaid to Orangebloods. “That’s been my main focus, really. It’s been tough, but I’m getting there.”