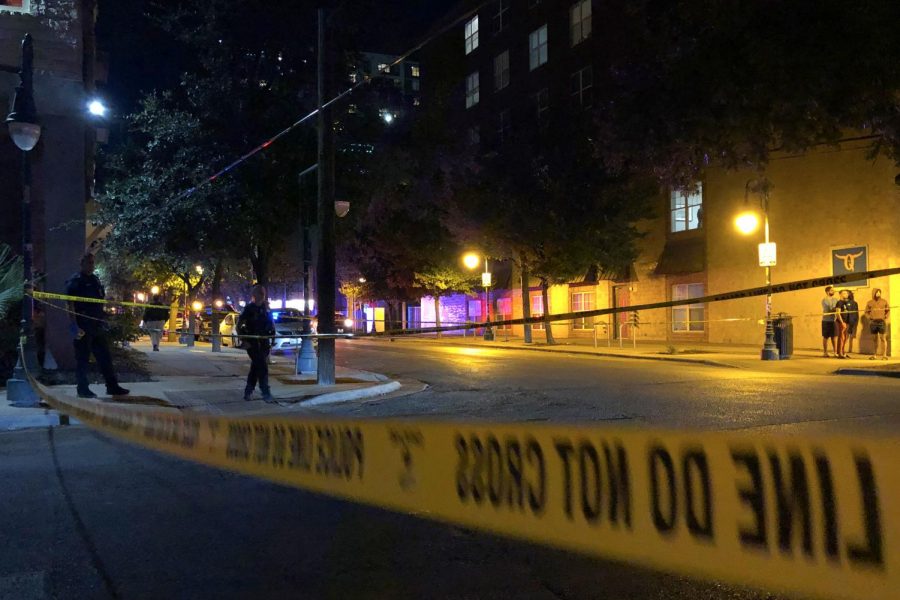 Removing her attention from her friend, Aliza Gomzin’s phone flashed with chat notifications. Chaos rising with each minute, her screen filled with rumors of possible gunshots on different West Campus streets and panicked students wondering if they should seek shelter.

Spending Halloween night in Dallas, Gomzin realized from afar that her friends could be in the line of fire.

“Our group was going to go out that night,” the psychology freshman said. “I thought, ‘We could’ve been there.’ That’s what goes through my mind every time something happens like shootings or armed robberies.”

As Twitter surged with theories, the UT Police Department issued a single report of an active shooting investigation on 22nd Street and Pearl Street at 11:45 p.m. on Oct. 31. Without any further communication from UT, students looked to one another for updates, utilizing crowdsourcing apps and police scanners.

Prompted by the events, Gomzin discovered the personal safety platform Citizen, a service where users upload location based safety alerts. Others turned to dedicated forums for incident reporting on chat apps like GroupMe and Patio.

“I got (Citizen) the night of the incident and it’s pretty useful, but sometimes you get so desensitized,” Gomzin said. “You’re like, ‘Oh, so many things are happening,’ and you stop checking.”

After SafeHorns president Joell McNew received word of the shooting, she opened Twitter and scrolled through an onslaught of concerned tweets from students, sensing the rising panic.

“It was tangible,” McNew said. “You could feel the fear of the people that kept posting over and over.”

SafeHorns, a nonprofit organization advocating for  UT to improve student safety through increased policing, spreads awareness about risks around campus and fosters community conversations about minimizing harm. McNew said she always notices Longhorns trying to keep each other safe by sharing information.

“Students have always been communicating with each other and telling each other, ‘Okay, avoid this area,’” McNew said. “(Group chats) became their communities (and) the way they receive information and feel connected. I think that is something they all rely on.”

For students worried about security, UTPD’s acting Police Chief Don Verett said West Campus is one of the safest areas in Austin. He said his department hopes to alleviate community stress through increased patrolling and a Halo camera system on Guadalupe Street.

“When any city gets bigger, there’s going to be more crime because there’s more people,” Verett said. “We try to deal with not just the crime, but … the perception of (un)safety.”

After the Oct. 31 shooting, students began to share concerns about the timeliness of UTPD, which many believed responded too late to the incident. Verett said incident warnings rely on a set of standards defined in the Clery Act and depend on the discretion of campus authorities.

While UTPD can’t publicize incident information until receiving notification from the Austin Police Department, Verett said students can trust that UTPD will alert them of any verified, relevant news.

“We have an obligation to put out factual information,” Verett said. “We’re never going to be as fast as Twitter or GroupMe because that’s instantaneous. … And I know there was some consternation that we didn’t send more follow-ups, but for us, the incident was over.”

On the night of the shooting, Ashley Diaz said she listened intently to police scanners in search of information. The next morning, the theatre and dance sophomore still struggled to find answers. She joined a GroupMe chat dedicated to notifying students about incidents on and off campus but then quickly muted it despite the chat’s good intentions.

A few days after the incident, Diaz walked around West Campus with her roommates and saw fireworks popping in the sky. All of a sudden, the GroupMe kicked up again. She said she understands the need for heightened caution after frightening events, but false information shouldn’t interfere with experiencing life.

“People just kept on fearmongering in (the GroupMe),” Diaz said. “They’re really scared so they’re trying to be overly cautious, but at the same time, by thinking (the noises are) gunshots, they miss out on the fireworks they could have looked up and seen.”