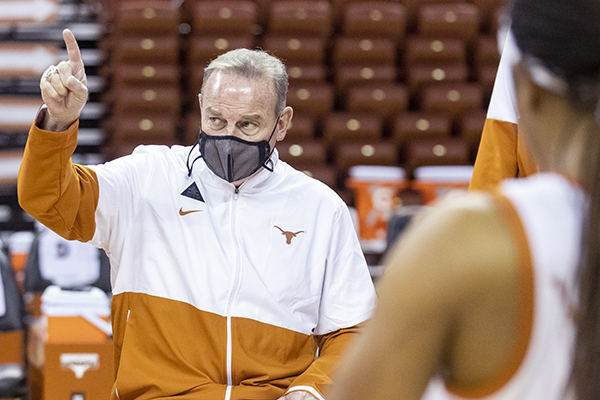 Following the 2020-2021 season, during which the Texas women’s basketball team reached the Elite Eight in head coach Vic Schaefer’s first year, there are many questions to be answered about how the team will follow up from last year.

Here are three storylines to look out for as Texas gets ready to start the regular season Tuesday.

Who will fill the void for Charli Collier?

Former Longhorns forward Charli Collier was a major contributor for the team in the 2021 NCAA tournament and through the entirety of the season. She averaged 19 points on 51% shooting, as well as a whopping 11 rebounds per game. With her now moving on to the WNBA, there’s a huge hole in the team’s offense, and Texas is going to need someone to step up and fill the void that Collier left behind.

The Longhorns did a solid job finding some young talent to help minimize the effects of Collier’s absence in the offseason with the addition of some promising freshmen in guards Rori Harmon and Kyndall Hunter and forwards Aaliyah Moore and Latasha Lattimore.

Harmon and Hunter can offset a lot of the scoring that Collier brought to the table with their ability to finish around the rim. Lattimore brings a versatile game to the team with her great rim protection, solid finishing skills and a decent three-point shot. Moore showed in the exhibition game that she’s a tough finisher in the paint and a great inside defender in the painted area.

Other than the new additions to the squad, senior forward Audrey Warren and senior guard Joanne Allen-Taylor will need to take over as leaders of the team in order to speed up development of the younger players. Both have already shown their capability to score at a high rate, but it will be on the two and Schaefer to keep the freshmen focused as the season goes on.

Can the Longhorns compete with such a young team?

This season will be different for Schaefer because there aren’t many experienced players on his squad this year. The team consists of just three seniors and one junior, while the rest are all sophomores or freshmen. Top teams such as Baylor and Iowa State have at least five juniors and seniors on their squad, giving them the advantage of experience over Texas.

Having been to the big stage and experienced the college basketball atmosphere is a huge plus for a team as the players will know what to  expect. With the Longhorn squad mainly consisting of underclassmen, there could be a lot of mistakes made on and off the court.

Schaefer may need to be patient with his squad as the season goes on and the freshmen get acclimated to the transition from high school to college basketball. Although the team is young, they could get better as they roll through the season. With a little help from the few upperclassmen on the team, the Longhorns could make another run at the NCAA championship if the team can stay focused and minimize rookie mistakes.

Will Texas return to the Elite Eight and get another chance to hoist the NCAA championship trophy?

The Longhorns enter the 2021-2022 season ranked 25th in the Associated Press preseason poll, but being ranked low isn’t new for Texas. Last season, the Longhorns came into the year unranked, but still ended up reaching the Elite Eight despite low expectations.

The lower rank coming into this season, however, is justified because Texas lost a big part of the team in Collier over the offseason. Despite losing Collier, the team has a lot of potential with the addition of the new freshmen and the return of Allen-Taylor and Warren.

Coming off a monstrous 77-44 win in their exhibition game against Oklahoma Baptist on Nov. 6, fans and opposing teams got a glimpse of what Texas can do with their raw talent. If the team can come together, build better team chemistry and continue to fire on all cylinders, the sky’s the limit for them.