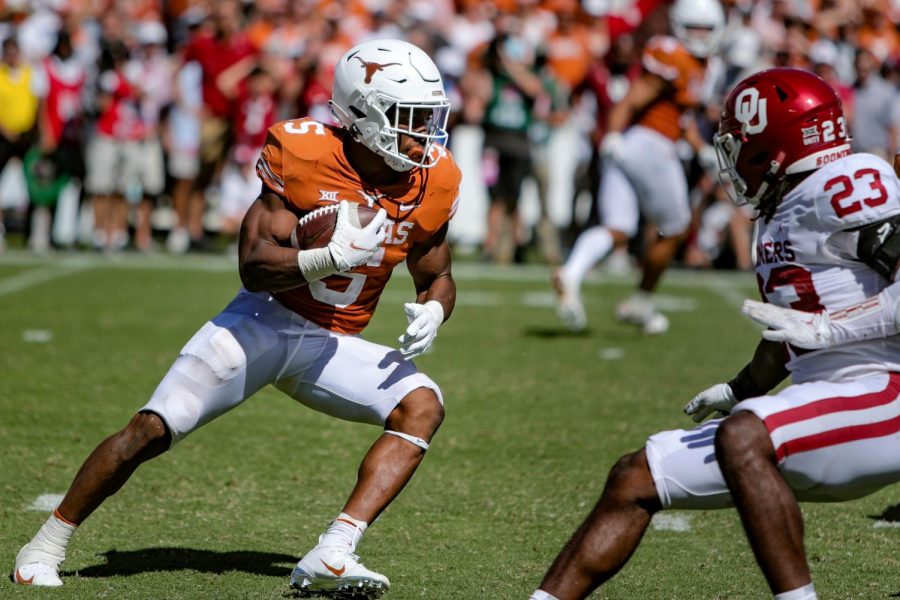 B​​ijan Robinson ran for just 59 yards on 13 carries against Oklahoma State last year. It was his first-ever start at the running back position for Texas.

Almost a year later, the workhorse running back often finds himself rushing for that many yards in a single quarter. Robinson is also a name to watch in the Heisman race as the face of a new era in Longhorn football.

“I’ve come a long way since then,” Robinson said, reflecting on how nervous he was in his first career start.

It’s hard to imagine a bruising running back like Robinson being nervous to start a football game, especially given his status as the best running back recruit from the 2020 class. His jitters speak to just how much pressure has been placed on the sophomore’s shoulders at Texas.

Ever since Robinson arrived on the Forty Acres, the Tucson, Arizona, product has been open about wanting to be the guy that helps turn Texas football back into the juggernaut it once was. After a decade with only one 10-win season and three head coaching changes, Robinson strives to jump start the change.

But as the past decade has shown, nothing comes that easily for the Longhorns.

Robinson could have gone to any school in the country and benefitted from the starting job right away with the freakish talent he has. As former Texas head coach Tom Herman recruited the now highly esteemed running back, Robinson knew that there were two running backs were ahead of him on the depth chart. He chose to become a Longhorn anyway.

Then came a freshman season that saw Robinson receive limited playing time as part of Herman’s infamous running back rotation. Splitting snaps with Roschon Johnson and Keaontay Ingram, Robinson received a fraction of the touches someone of his caliber would typically get.

“It was actually really good for me to get that slow (start) because I did have Roschon and Keaontay in front of me that I had to learn from,” Robinson said on Oct. 4. “They taught me a lot about just the ins and outs of reading holes, different zones and defenses.”

Heading into this season, Robinson could not be contained like he had been during his freshman campaign. Robinson quickly surpassed his 2020 total of 86 carries in just the fifth game of the year, when he carried the rock 35 times for 216 yards against TCU.

Head coach Steve Sarkisian clearly understands the value of having one of college football’s premier running backs. He’s going to feed him touches as many times as possible.

“I can handle as many (carries) as he needs, it doesn’t matter,” Robinson said after the TCU game on Oct. 2. “When you start getting involved more and more, you start seeing different things, different weaknesses in the defense.”

Robinson has become extremely adept at attacking those weak areas he spots in opposing defenses. He even works on bouncing off defenders as he’s stumbling to the ground in practice. That skill – he calls it contact balance – separates him from the rest.

His blissful speed and elusiveness were on display against Oklahoma last Saturday at the Cotton Bowl. Robinson had fans “oohing” and “aahing” as he bounced from one sideline to the other, making numerous Sooner defenders miss on his 50-yard run that nearly ended in a touchdown.

But as fate would have it, Robinson gained just 35 yards on nine carries in the second half. Oklahoma came storming back into the game, and the Sooners left Dallas with the Golden Hat for the fifth time in the last six years.

The Longhorns, once again, face a familiar conundrum – how to respond to a heartbreaking loss. Robinson’s quest to bring Texas football back from the grave received another momentary pause.

“It can be hard for some people, but you can’t let that cloud your mind at all,” Robinson said. “In life, if you let a bad thing deter you, it’s just hard to move on from it.”

Despite all the noise and setbacks, Robinson remains focused on the bigger picture – the same picture he’s had since day one. He recalled losing two straight state championship high school games to the same team. Those losses made Robinson realize the presence of a larger plan greater than himself.

As Robinson continues to take the college football world by storm, Texas’ success remains the number one priority in his mind. Robinson doesn’t need to be reminded about Texas’ past struggles or what he got himself into by choosing to play for the Longhorns. All that matters at this point is getting back on the right foot.

“We haven’t won anything and we need to understand that,” Robinson said. “We’re still trying to be a great team, and we can’t let up for anything.”

As Robinson and the Longhorns head into the weekend to face off against No. 12 Oklahoma State, the parallels to last year are striking. The Cowboys were undefeated then just as they are now, and the matchup represented a pivotal fight in the Longhorns’ Big 12 championship hopes.

Only this time around, expect a much larger output from Robinson.