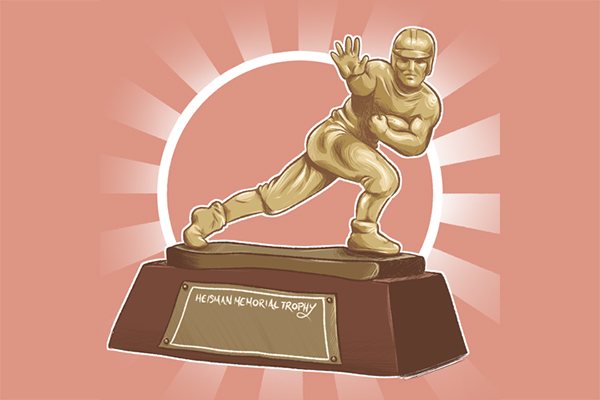 As college football officially enters the second part of the regular season in Week 7, the Heisman Trophy race is heating up after a historic weekend. Two quarterbacks –– Alabama’s Bryce Young and Ole Miss’ Matt Corral –– lead the pack of Heisman candidates, but impressive Week 6 performances from Michigan State and Texas running backs Kenneth Walker and Bijan Robinson are keeping the battle competitive.

Bryce Young has been nothing short of spectacular this season, but a single failed conversion ultimately cost the Alabama Crimson Tide their 19-game winning streak. The successor of current New England Patriots quarterback Mac Jones, Young threw for 369 yards, three touchdowns and one interception in the Tide’s historic loss to unranked Texas A&M. Despite costing Nick Saban his first loss since 2019, Young is still the Heisman frontrunner. Young’s Heisman stock slightly dipped after the Aggies sent Saban and team back to Alabama with broken hearts, but the sophomore quarterback arrived in College Station as the favorite by a large margin. Young recorded his season-best performance with 369 yards against an A&M defense, and he is still on track to be the Heisman winner despite Saturday’s unfortunate ending.

After Ole Miss’ miracle win against No. 1 Arkansas, Matt Corral’s Heisman stock remains the same. Corral trails behind Young in the Heisman race as the second-favored Heisman Trophy candidate. Although Corral and the Rebels lost to Young and the Crimson Tide back in Week 5, Corral continues to enhance his performance. Corral has played exceptionally well this season with zero interceptions and has recorded two 300-yard passing performances. Against Louisville and Tulane, the junior put up a collective 716 yards. Corral opened the season with poorer Heisman Trophy odds, but his stock has greatly increased as the season continues week-by-week. If Corral can continue to keep his current performance level up for the remainder of the regular season, then the Ole Miss quarterback stands a good chance at dethroning current Heisman favorite Bryce Young and making an appearance in New York come December.

Michigan State running back Kenneth Walker’s Heisman odds greatly improved after a dominant performance against Rutgers. Walker recorded 29 carries for 233 yards and a touchdown. Former Heisman Trophy winner Robert Griffin III listed Walker as his Heisman favorite in a Twitter post on Oct. 10. Walker currently leads the nation in rushing yards with 912 yards, and he also has 10 touchdowns this season, nine of which are rushing touchdowns. The junior enters Week 7 with better Heisman odds than in Week 6 as the Spartans pay a visit to the Indiana Hoosiers. If Walker beats out Young and Corral for the Heisman in December, he would become the first player from Michigan State to win the coveted Heisman Trophy.

Even though the two frontrunners for the Heisman are quarterbacks, both Walker and Texas’ Bijan Robinson are keeping the race to New York competitive. According to PFF, 126 of Robinson’s 137 touches at the Red River Showdown came after contact. Robinson managed to pick apart Oklahoma’s defense despite Texas’ loss with a 50-yard run. The sophomore successfully broke 10 tackles on 20 carries, and continues to be a problem for opposing defenses as his Heisman stock improves each week. After Saturday’s loss and Robinson’s 137-yard performance, the running back’s Heisman odds doubled. Robinson’s stock could continue to become more valuable if he shows out against Oklahoma State on Saturday back in Darrell K Royal-Texas Memorial Stadium.