Keys to the game: Oklahoma 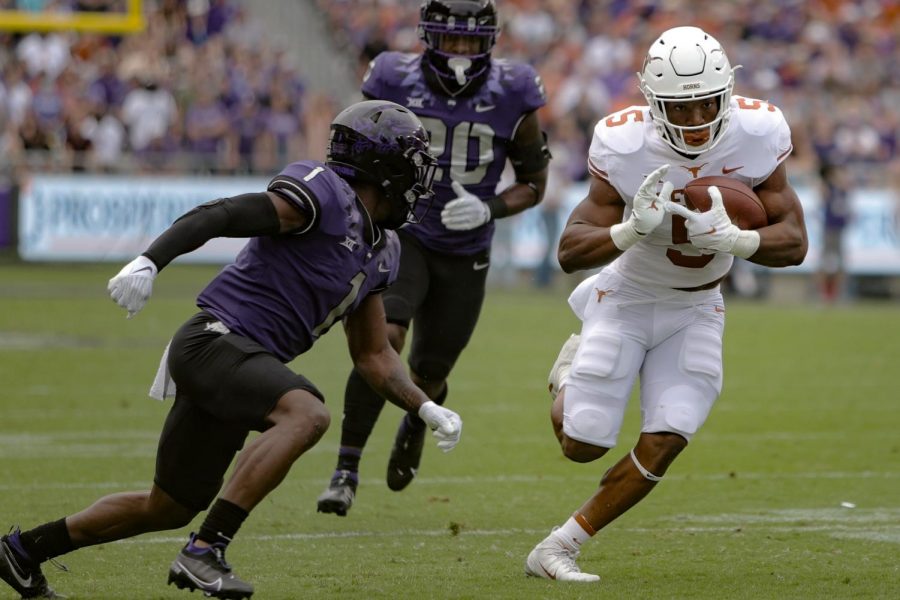 Big Tex and the Cotton Bowl will welcome back thousands of burnt orange and crimson red faithful to Dallas for one of the best events  in all of college football — the Red River Rivalry game. With Big 12 title implications on the line, Texas and Oklahoma will bring only their very best for this epic gridiron battle.

If the Longhorns want to prevent the Sooners  from making it four straight rivalry wins in a row, sophomore running back Bijan Robinson will have to shoulder a significant share of the workload, and he definitely can. Last Saturday against TCU, Robinson had arguably one of the best games of his career, carrying the ball 35 times for a total of 216 yards.

The only thing standing between Robinson and a Heisman-worthy breakout game is a ruthless Oklahoma run defense. Statistically, the Sooner defense keys in on the run with a high degree of success and is one of the nation’s best, allowing on average less than 80 yards per game.

Third year Oklahoma defensive coordinator Alex Grinch will have his players swarming Robinson, making sure he doesn’t escape with any easy yards. Grinch must call one of the best defensive games of his career and needs his defense to attack Robinsons’ running game anytime the Texas running back gets the ball.

Look to see if the Longhorns can establish the run game early and how well Oklahoma responds to a strong Texas running game.

Junior quarterback Casey Thompson has been patiently waiting for his big opportunity under center for three years and counting, and against Oklahoma in particular. With both his father and brother formerly playing at the quarterback position for the Sooners, Thompson will have to play at his peak in an atmosphere he has yet to experience as a starter.

Thompson has thrown an interception in each of the past three games and struggled against the TCU defense, barely completing over 50% of his passes. Still, the quarterback dug in and fought hard, just like the leader he is and the leader he has proved himself to be on Texas’ offense.

Redshirt sophomore Spencer Rattler is the heart of the Sooner offense and is the next star quarterback in the Lincoln Riley era. However, in what was supposed to be a Heisman contending year for Rattler, the sophomore has struggled against opponents where former Oklahoma quarterbacks have not.

If the Sooners want a chance of keeping the Golden Hat and taking it back across the Red River, they’ll need Rattler to not force any throws against the Longhorns’ secondary. Rattler needs to stay in his game and remain focused because the pressure is coming.

Through five games this season, Rattler has tallied four interceptions — already more than half the number he threw last season. Sooner faithful called for Rattler’s backup in Week 4 once the sophomore threw yet another interception.

If Oklahoma fans begin to call out Rattler again, look to see how the quarterback responds and how he deals with added pressure among a swarming Longhorn defense.

Head coach Steve Sarkisian is looking to beat the Sooners in his first year in Austin, which is something a Longhorn head coach has not done since Mack Brown in 1998. To get the job done and beat the odds, Sarkisian will have to trust his instincts and dial up the right plays at the right time.