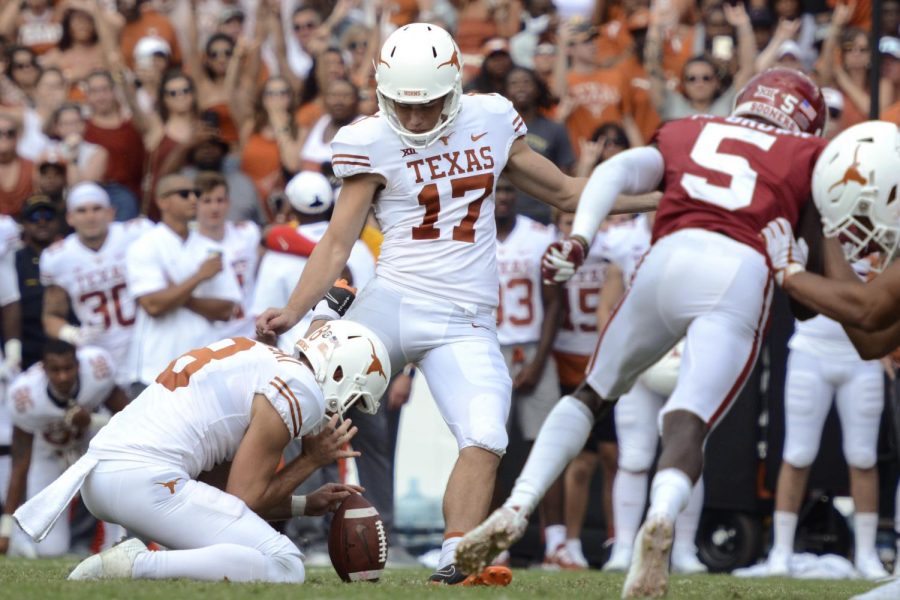 The Longhorns head to Dallas this weekend to face No. 6 Oklahoma in one of the most beloved rivalries in college football. The Cotton Bowl’s annual Red River Showdown this Saturday marks a full circle career for some Texas seniors who can  reminisce on the Longhorns’ 2018 game-winning field goal by none other than senior kicker Cameron Dicker.

Fourth year players Casey Thompson, B.J. Foster, Josh Thompson and DeMarvion Overshown, who were all freshmen on Texas’ 2018 roster, enter Saturday as marquee players. And perhaps one of the most infamous Longhorns in the eyes of Sooner fans, Dicker will make his final start against Sooner foes on this side of the Red River.

The 2018 matchup featured future Heisman Trophy winner and now-esteemed NFL quarterback Kyler Murray, along with over a dozen current NFL players. The first half showcased relatively even performances from both sides with Texas leading 24-17 at the end of the half. The Longhorns, led by former head coach Tom Herman, jumped out of the gates in the second half, putting up 21 points to Oklahoma’s seven. Texas had a commanding 45-24 lead heading into the fourth quarter until, as Heisman winners do, Murray flipped the script and led the Sooners to 21-straight points in the fourth quarter. Forty-five all, and Longhorns and Sooners were shaking in their boots.

With a tied game and two and a half minutes on the clock, Texas needed a drive to simultaneously put points on the board and run down the clock. Sam Ehlinger did just that. The then-sophomore quarterback led the Longhorns down the field, putting the team in a comfortable field goal range. Herman called a timeout with 14 seconds remaining to give Texas a shot at a 40-yard field goal –– not entirely ambitious, but not entirely doable.

To secure its first win against the Sooners since 2015, the Longhorns  relied on the foot of Dicker the Kicker. Earlier in the game, Dicker nailed a 44-yarder in the closing minutes of the first quarter and was 6-for-6 on extra points. Players locked arms on the sidelines, the Sooners praying for a missed kick and the Longhorns praying for a kick between the uprights. Fans fell silent on the Cotton Bowl’s Texas end. With a clean snap and a clean hold, Dicker split the uprights, giving the Longhorns  a 48-45 lead. Oklahoma got the ball back with just eight seconds to drive down the field. As history has it, eight seconds was too little, too late for the Sooners.Texas walked off with the Golden Hat and a victory.

The parallels between this Saturday’s matchup and 2018’s cannot be ignored. In 2018, the Longhorns and Sooners entered the game as the No. 19 and No. 7 teams in the country, respectively. The Big 12 rivals enter this weekend ranked similarly with No. 21 Texas and No. 6 Oklahoma, looking to continue the trend of great rivalry matchups between the two.

Texas will see many faces both new and old with larger roles in this year’s rivalry game, some of which are Casey Thompson, Bijan Robinson and Spencer Rattler.  Seniors like Dicker will have a chance to write their final chapter and close the book on the Red River Rivalry the same way they opened it: with a win.