Meet the next generation of the Texas defense: Jaylan Ford and Alfred Collins 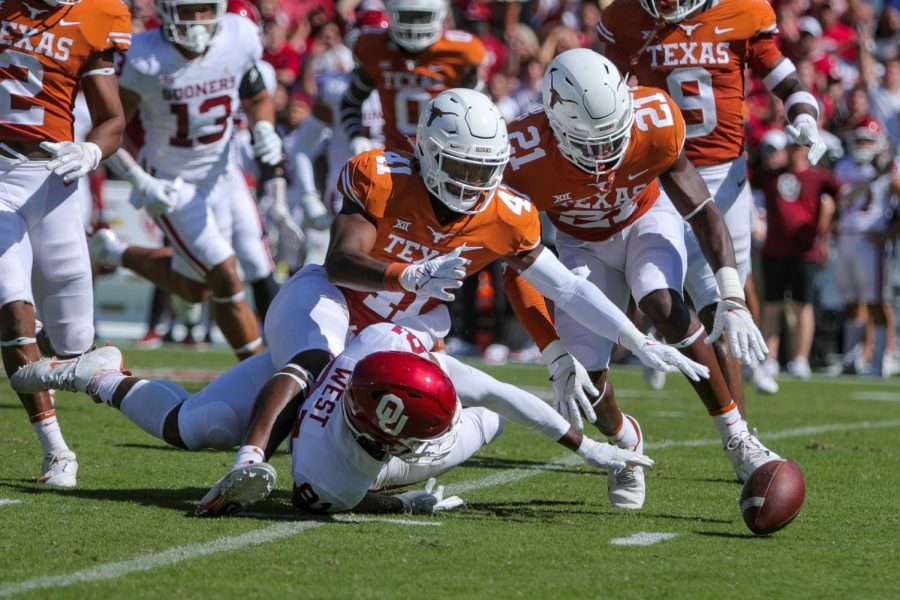 Jaylan Ford and Alfred Collins are the next generation of Texas defenders.

In a college football world where fifth and sixth-year seniors take over starting jobs, the sophomore linebacker and defensive lineman got their first crack at significant playing time this season against Oklahoma State on Oct. 16.

Collins started in his second career game after senior defensive end Jacoby Jones suffered a season-ending foot injury that required surgery. Ford replaced linebacker DeMarvion Overshown early in the 24-32 loss to the Cowboys after the senior left due to a concussion.

And the two second-year players didn’t just take the playing time from injuries — they earned more playing time moving forward with their breakout performances, especially in the run game. Older teammates of the duo on the defense certainly think so as well.

“(Alfred) has stepped up a lot,” senior cornerback Josh Thompson said. “You can see his maturity these past two weeks, coming in and playing a big role on the D-line … (Jaylan) came in and played with heart. Jaylan Ford, he goes out and competes every day in practice and we all see that. That’s why, when he gets in, nothing really falls off with us and we trust him.”

“Oklahoma State was that first game I really played with (Jaylan),” junior linebacker Ovie Oghoufu said. “He really showed me he knows what he’s doing out there. He’s very aggressive, and he has bad intentions … (Alfred) is another one. I really like playing with (Alfred Collins), we’re usually on the same side. He’s playing real free. He’s getting to the ball. He’s bouncing the ball to me, and we’re both making a lot of plays.”

The Longhorns limited the Cowboys in the first three quarters –– largely due to Ford and Collins –– before the dam broke open in the fourth quarter.

Collins blew up run play after play with his penetration into the backfield. The 6-foot-5-inch defensive end is listed nearly 70 pounds heavier than the other defensive ends at 302 pounds. Junior Jett Bush, Collins’s backup, is listed under 240 pounds, at 236. Starting defensive end Ray Thornton is listed at 238 pounds.

Collins’ strength and size showed against Oklahoma State. Head coach Steve Sarkisian said setting an edge with the ends and outside linebackers was a priority in the run defense. Collins created the push at the line to “set the edge” consistently while also flashing impressive speed and agility for a lineman his size.

In a two-point conversion in the fourth quarter, Ford made the biggest play of his short Texas career — making a tough, aggressive open-field tackle to keep the Longhorns ahead 24-22.

All in all, Ford finished with a team high 12 tackles, while Collins notched two tackles for loss.

Sarkisian said Collins made strides and earned playing time heading into the Oklahoma State matchup. He was similarly complimentary of Ford after the game.

“I thought Jaylan Ford did a nice job,” Sarkisian said after the Oct. 16 loss. “He stepped in and made plays.”

Breakout performances from the two youngsters on the defense doesn’t just bode well for the Longhorns this season.

While Sarkisian said Overshown returned to practice from his concussion, the junior linebacker is a likely candidate for the 2022 NFL Draft. Texas already has thin linebacker depth, and the emergence of Ford, a three-star recruit, as a starter could significantly bolster the position group as it goes through some leaner seasons.

Collins has already emerged as a starter. And while defensive coordinator Pete Kwiatkowski prefers to play a 2-4-5 defense with hybrid defensive end/outside linebackers like Oghoufu, Bush or Thornton rather than a more traditional defensive end like Collins, the coach showed an ability to adapt to his personnel against the Cowboys.

Texas had a tendency to play a 3-4 defense more often on several downs against Oklahoma State, and Collins shifted to the outside on others, proving to be just as capable of a pass rusher on third-and-long downs.

Collins’ and Ford’s performances are not on the decline anytime soon. On the contrary, 95’s and 41’s careers are just beginning.

Texas could certainly use them.