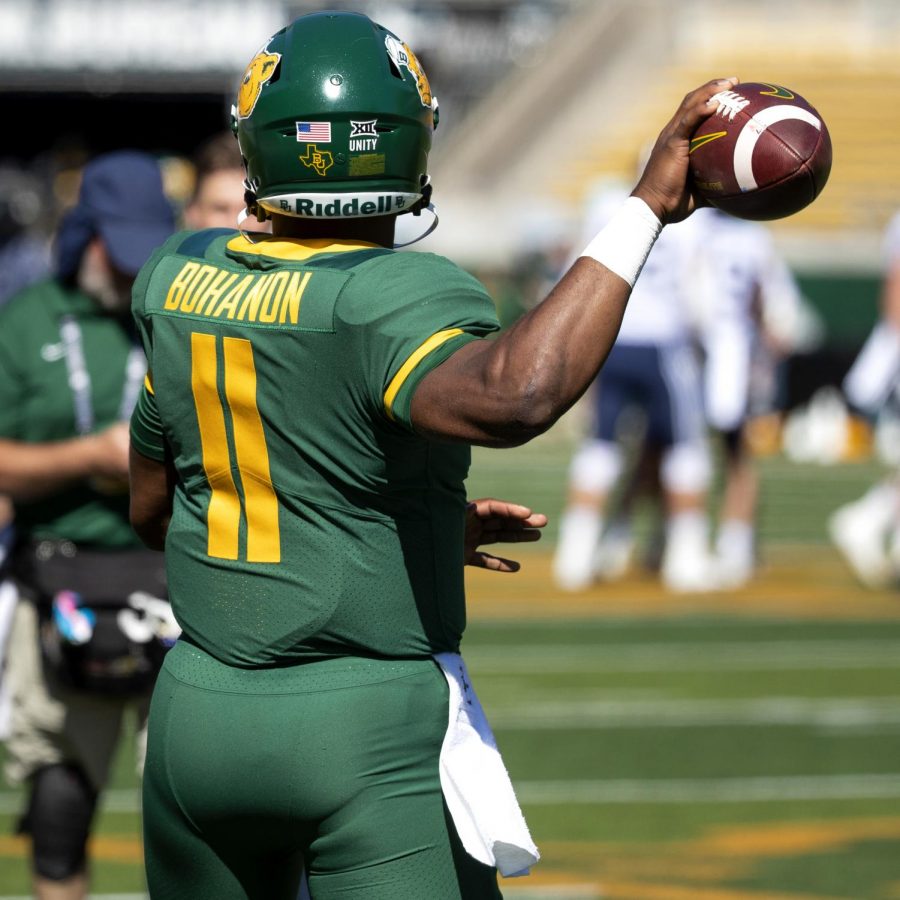 Editor’s Note: This article first appeared as part of the October 29 flipbook.

While a win against No. 16 Baylor is definitely possible for the Longhorns, four Bears could cause major issues for Texas.

Junior quarterback Gerry Bohanon has been quietly dominating all season. Bohanon has had an exceptional season with 114 completions for 1,563 yards and one interception. Bohanon’s only interception on the season came during the Bears’ win over BYU on Oct. 16. The Earle, Arkansas product completed 18-of-28 passes against the Cougars and accounted for 231 yards. Bohanon leads the Big 12 in passing yards and currently leads the conference with the most touchdowns at 18 on the season. The junior is also one of four quarterbacks in the country to have thrown for over 1,500 yards with only one interception. The Bears ended the 2020 season at 2–7 and currently sit at 6–1 overall. Bohanon’s consistency has been a major contributing factor to Baylor’s successful turnaround. Texas will have to stifle Bohanon as much as possible to secure another consecutive win in Waco over the Bears.

Senior running back Abram Smith gave a dominating performance in Baylor’s win over BYU in Week 7. Smith rushed for 188 yards on 27 carries and ended with three touchdowns. His playing style is simple but effective; Smith is quick to find holes in opposing defenses and subsequently plows over defenders within his path. Smith is one of five running backs in the Big 12 who average over 100 yards per game. Despite his age, the senior is relatively new to the running back game. Most of Smith’s time at Baylor has been spent on special teams, but he was moved to the backfield this past spring. Smith is one of the major threats Texas should look out for due to his ability to run through defenses at a moment’s notice.

Senior running back Trestan Ebner has been vital to Baylor’s offense this season. Although Ebner’s style of play is flashier than that of fellow running back Smith, the two are crucial to the Bears’ offense. Ebner also has the ability to break through defenses and into the end zone. The duo of Ebner and Smith has allowed Baylor to lead the conference in rushing yards, yards per carry and first downs via rushing. Although Ebner has been known for his athletic abilities for years, Smith’s presence with him in the backfield has only boosted his stats. Texas must be able to stop both Ebner and Smith if the Longhorns wish to close out October with a win.

Junior linebacker Dillon Doyle has shown that he can be a solid two-way player this season. Doyle played a major role on both sides of the ball in Baylor’s 24-14 loss to Oklahoma State. Doyle lined up as a fullback and acted as the main blocker to allow Smith to run for a 55-yard touchdown for Baylor’s trip to the end zone. Doyle finished the Oklahoma State game with 15 total tackles. During Baylor’s Week 7 win over BYU, Doyle caught a touchdown pass and also had a sack that forced the Cougars to settle for a field goal. Doyle has proved to be a danger both defensively and offensively and if the linebacker can keep up with his current pace of play on Saturday, then he could be a serious threat to both sides of Texas’ game.