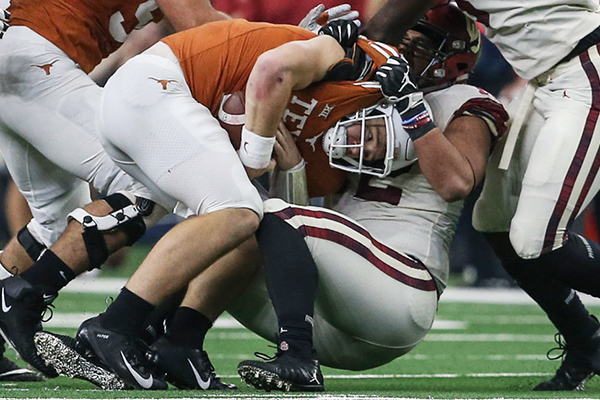 When we woke up Sunday and checked the latest AP Top 25 Poll, No. 6 Oklahoma stuck out like a crimson eyesore. Let’s be honest, the Sooners have no business being anywhere near the Top 10.

We’ll take everyone through the Sooners’ schedule week-by-week to expose just how fraudulent y’all really are.

Week 1: Oklahoma scrapes by Tulane 40-35. Really? How embarrassing it must have been to almost lose in your home stadium with the Green Wave logo painted on your field. While that was a nice gesture, unfortunately, “nice” is the last word to describe the Oklahoma football program. We’re genuinely sorry y’all have to root for a quarterback as stuck-up as Spencer Rattler.

Week 2: Oklahoma shuts out *checks notes* Western Carolina? Congrats? No disrespect to the wonderful Catamount faithful, but come on. Beating up on an FCS program is so sad, though that will fit right in with the SEC’s scheduling habits. Be like Texas and refuse to schedule non-FBS level teams, then come talk to us.

Week 3: Oklahoma holds off Nebraska 23-16. Only the Sooners would find a way to struggle with this game. The Cornhuskers have been the laughing stock of this millennium, yet somehow they almost beat y’all. Oh, and it was in Norman too? Pathetic.

Week 4: Oklahoma beats West Virginia by a field goal, 16-13. There are few things more debilitating to watch than the Sooners’ offense. If the phrase “ugly win” is used to describe every single one of your wins, get some help.

Also, thanks for doing our recruiting work for us by loudly chanting against your own quarterback at home. Ungrateful fans booing an ungrateful quarterback equals wins for everyone else. No wonder Casey Thompson spurned his family legacy at Oklahoma to come play for y’all’s biggest rival.

Week 5: Oklahoma finally beats Kansas State 37-31. Y’all were so close to dropping your third (third!) straight game to the Wildcats. There’s nothing sweeter than watching the Sooners’ annual struggle against Kansas State.

Through five weeks, the Sooners have played four Power 5 teams — all of which have been unranked — and y’all haven’t managed to beat a single one by more than a touchdown. Texas will be the first ranked team that y’all will play this year, and the whole country will finally, if they haven’t been made aware already, realize just how overrated y’all are.

While the Sooner faithful might put on a brave face for this season, everybody knows the Oklahoma football program is in a free fall. Between a star quarterback somehow regressing at “Quarterback U,” fans booing their own players and a supposed offensive-guru head coach deploying one of the ugliest offenses in the country, it’s a wonder y’all have managed to not drop a game yet.

Everyone in Norman should thank their lucky stars that preseason polls are a thing. Y’all have the AP voters who ranked preseason Oklahoma No. 2 to thank because they’re too cowardly to admit they were totally wrong about the Sooners until you actually lose a game. It will come in time though. Just prepare for your eventual steep slide down the rankings, just like our good old friends in College Station. Would hate for that fall to bruise your egos.

Also, don’t you dare cross that Red River into this great state claiming to enjoy good barbecue after the disaster your head coach served up for Easter dinner. That brisket, pardon my French, looked like shit and was drier than Oklahoma’s hopes of ever actually winning a College Football Playoff game.

But don’t worry, y’all won’t have to worry about embarrassing yourselves on that national stage again this year.