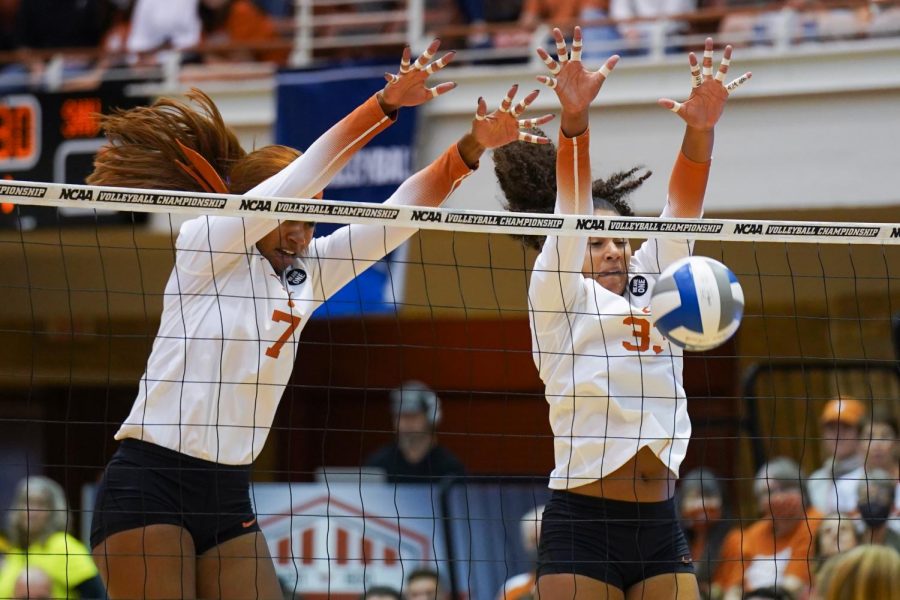 As Texas volleyball’s season came to an end in a loss to Nebraska in the Elite Eight, a group of players emerged as game changers for the Longhorns.

Read about the players who pushed Texas to a place in the Elite Eight, and who could be emerging next year.

The junior outside hitter came into the 2021 season a force to be reckoned with, but she leaves as the powerhouse of Texas volleyball. Eggleston started out her season strong: She broke double digits for kills in almost every game and also served as a productive defensive player for Texas, coming out with 14 digs in a September game against Texas A&M. As the season progressed, Eggleston’s performance only improved. She hit her stride in a game against Oklahoma, walking away with 18 kills and a .586 hitting percentage.

Her performances throughout the season earned her five recognitions for Big 12 Offensive Player of the Week, as well as Conference Player of the Year and a spot on the All-American first team. But the depth of Eggleston’s skills didn’t truly become clear until Texas’ last two appearances in the NCAA tournament, in which the Longhorns struggled. Eggleston pushed through difficult sets and was the go-to player for almost any opportunity to set a kill. In back-to-back games against Nebraska and Washington, Eggleston emerged with 20 kills.

Graduating senior Brionne Butler entered the 2021 season on the volleyball world’s radar, and she stayed there. Butler left the season with a .466 hitting percentage — the second best in the nation — and had a season best of eight blocks against Nebraska in her final game as a Longhorn. Butler’s average blocks and kills per set both faced a slight decrease this season compared to previous years, but she still put up a high of 13 kills in a game as a middle blocker. Texas will be hard pressed to replace her defensive power.

When junior Skylar Fields is in her stride, there is no one like her on the court. She hits with a force incredibly hard for a back line to defend, leading her to a season high of 26 kills in a single game. While not every game is perfect for Fields, she presents an incredible challenge for any defense. Despite establishing her name this season at Texas, Fields elected to enter the transfer portal this Friday according to Inside Texas and the Austin American-Statesman.

Sophomore Melanie Parra oozes talent. It comes to life every time she steps up to the service line. In Texas’ matchup against Iowa State, Parra put up five service aces, and multiple games followed closely behind with four. However, Parra faced some struggles in defensive play this year, especially digging from the back line.

The sophomore outside hitter also showed potential at the net this season with two games against Texas Tech, where she walked away with seven and nine kills in back-to-back games. With improvement on her defensive game, Parra has the chance to become indispensable for Texas.

In the team’s last game against Nebraska, the junior was subbed in halfway through the second set, and was able to establish more controlled play for the Longhorns. With an off season to grow closer with her Longhorn teammates, Ka’aha’aina-Torres has the potential for an impressive senior season.