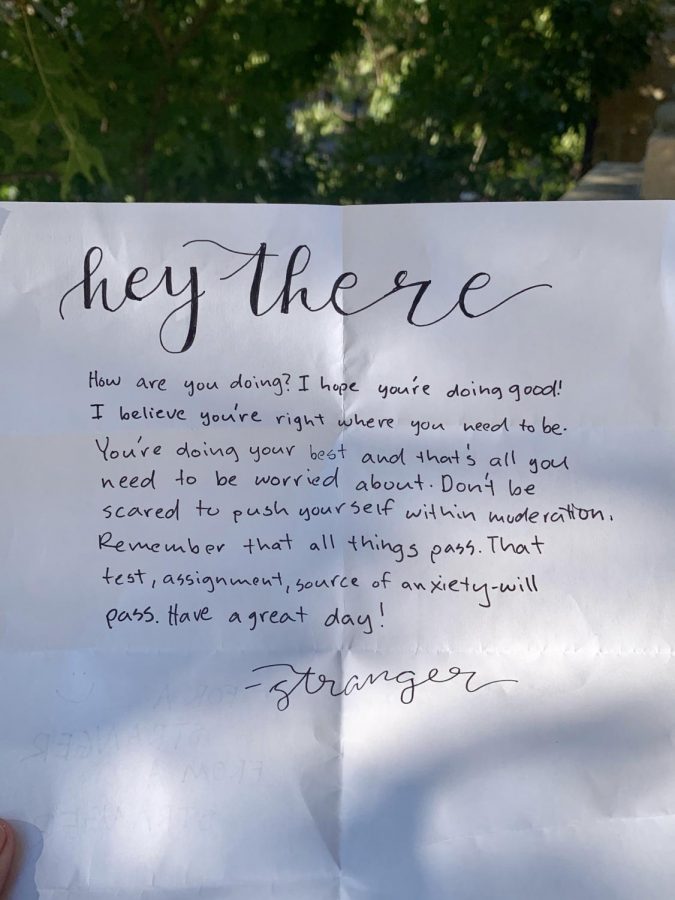 As Madeline Salinas walked home from hours of studying on campus at the end of a long Monday, a white envelope sticking out from a bush caught her attention.

“I picked it up and it said, ‘for a stranger, from a stranger,’ and I automatically was like, ‘This is going to make me cry, I can already tell,’” journalism junior Salinas said.

The anonymous note, which Salinas found near the Flawn Academic Center, read “hey there” in calligraphy, followed by words of encouragement for students stressed about an exam or life events. Other students found similar anonymous notes across campus and also felt that it changed their perspective on life as a student.

“People get so caught up in what they’re doing and the assignments they have to do and everything that’s going on in their life that it’s so easy to feel like, I’m the only one right now with anxiety or stressing out about these things,” Salinas said. “Seeing a note like that reminded me (that) people get it.”

Reading the note made Salinas reflect on her growth as a student. During her freshman year, she sacrificed her weekends to get ahead on assignments because the thought of falling behind scared her.

“As hard as it is at times to step away from my work because I feel like, ‘I should be doing this,’ it’s become a lot easier for me to be like, ‘Okay, no, you’re not going to do your best work right now if you don’t take at least an hour break to go outside and go for a walk,’” Salinas said.

After feeling uplifted by the note, Salinas shared it with her roommates. One of them, Colton Winters, a communication and leadership junior, said the line “You’re doing your best and that’s all you need to be worried about,” struck a chord with him.

“All too often, we’re always so concerned about assignments (and) projects and ‘Oh my gosh, my bank account has $10 in it,”’ Winters said. “To be reminded, ‘Hey, you’re doing great, you’re exactly where you need to be,’ that’s a really nice thing.”

A few days after finding the note, Salinas saw another student, math sophomore Jada Stewart, tweet about messages she found in a Perry-Castañeda Library bathroom. Although Salinas didn’t plan to share her note on Twitter, she said Stewart’s tweet inspired her.

“The most impactful thing that I read was ‘remember to take care of yourself,’” Stewart said. “The fact that somebody that I don’t know is reminding me to just take time for myself to make sure that I’m okay, I thought was so nice.”

Rigorous academics at UT can make students feel like they should sacrifice their sleep and wellbeing to succeed in their studies, she said. Reading the note reminded her to take a step back, relax and take time for herself.

“I find myself saying that sort of thing to my friends all the time, but I don’t exactly take that advice for myself,” Stewart said. “Just know that there are people out there that you don’t even know, strangers, that are writing notes for you to encourage you and to uplift you. You’re not alone.”