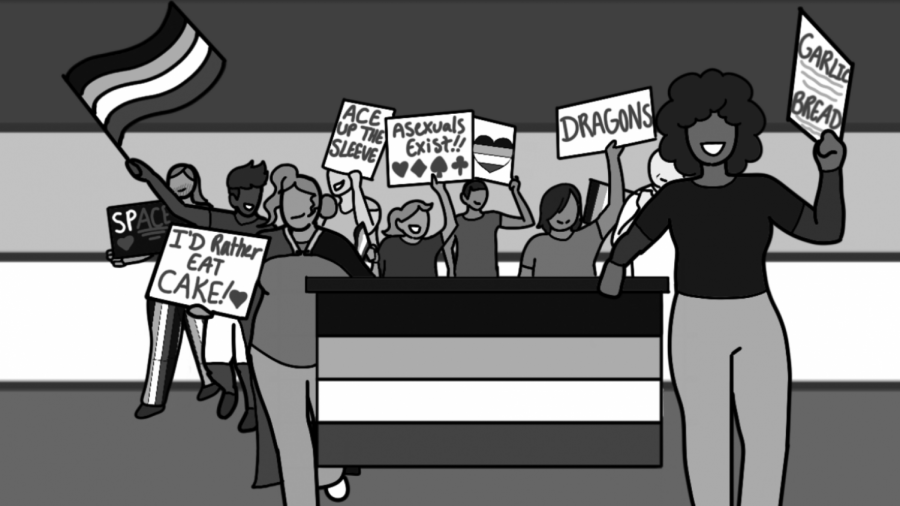 Throughout highschool, as classmates discussed topics such as intimacy and sex, Ashlyn Tatro noticed something different about herself — she wanted nothing to do with it. Puzzled, Tatro took to the internet and stumbled across a curious word: asexual.

“When I found the term asexuality, it just made so much sense,” Tatro, an undeclared sophomore, said. “It was like a wave of relief washing over me.”

Asexuality acts as an umbrella term for various degrees of sexual attraction and most commonly indicates an absence of sexual attraction or desire. With only around 1% of the population identifying as asexual, many asexuals struggle to feel recognized within the general public. Asexuality Awareness Week, which spans from Oct. 24 to Oct. 30, serves to highlight the asexual community and bring attention to its lack of representaion.

“Most people don’t even know what the hell asexuality is,” Tatro said. “It truly is an invisible orientation … A sad thing that asexuals face is that when they try to come out to people, some of the first things they’re told is, ‘That’s not real.’”

To create a safe space for asexuals on campus, UT’s Gender and Sexuality Center hosts a weekly group called embrACE. Mayuri Raja, a UT alumna and founding member of embrACE, credits the group with furthering her understanding of her own asexuality and creating her sense of belonging within the queer community.

“When I got to college and started being in other queer spaces, I started to feel like, ‘Am I asexual enough? Do I deserve to exist in this space?’” Raja said. “Having embrACE helped me get over that because it helped me realize that the label wasn’t what made me who I was, the label helped me understand who I was.”

Spaces for the asexual community extend past the GSC and across campus. Megan Farabee, an Asian studies freshman, recently met other asexual friends through her piccolo section in the Longhorn Band.

“It was the first time I had ever met someone who wasn’t just me that was asexual — it was really nice,” Farabee said. “It’s given me more confidence to accept myself and not be as afraid of coming out.”

Tatro said contrary to a widespread misperception, the concept of sexual attraction and romance are not always the same. She said she identifies as an aromantic asexual, or an asexual who feels little to no romantic attraction. Oftentimes, Tatro said she feels misrepresented by some people’s conception of aromantic asexuals.

“We’re not robots, we’re not emotionless, we still really value family and friends, and closeness and connection with people,” Tatro said. “We just don’t desire that romantic connection.”

Raja said in order to avoid placing the burden of education solely on the asexual community, people outside the community need to keep an open mind and educate themselves.

“Since asexuality is one of the identities that is lesser known within the (LGBTQ+) community, I think we can all stand to learn more about each other instead of sticking to our own identities,” Raja said. “That’s how you’re going to get the full picture.”