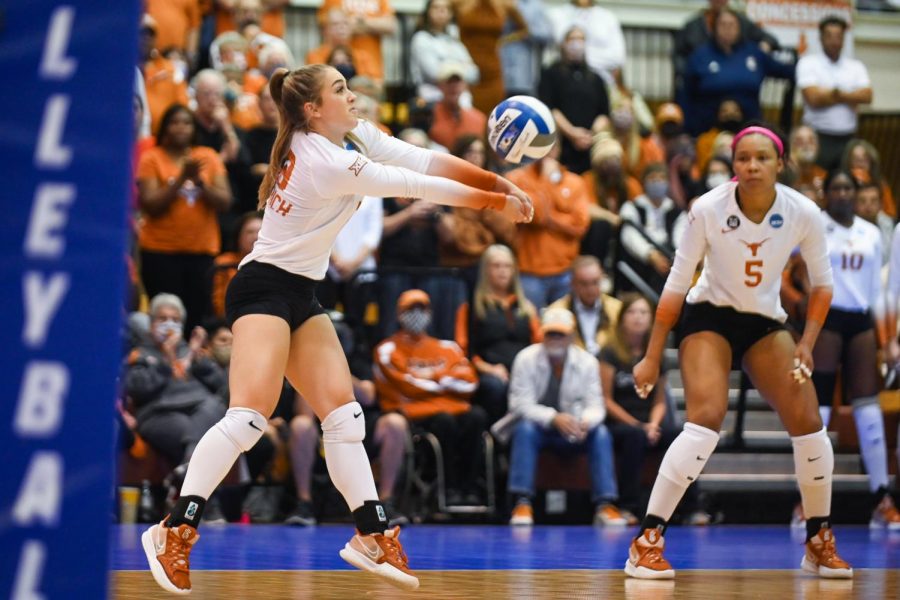 In a season where No. 2 Texas volleyball sought redemption after a 3-1 loss to Kentucky in the national championship, the Longhorns failed to top the Cornhuskers in the Elite Eight. In the match, Nebraska used its defensive prowess to prevent scores from big Texas swings and meticulously place attacks in the Longhorn back court.

Texas’ exit from the tournament in the Elite Eight is in spite of returning every starter from the 2020 season and holding the top team hitting percentage in the nation. Due to the chip on their shoulder and the continuity of a well-rounded team, the Longhorns were favored to return to the title game — and to win big.

However, a trip to Columbus, Ohio, for the Final Four wasn’t in the cards for the Big 12 champions. Not because of a tough regional bracket nor poor gameplay by the Longhorns, but because of fundamental problems in the back row.

During Big 12 Conference play, opponents were only hitting at an average of 0.146 in comparison to Texas’ 0.364. The only team that seemed to have an answer to the Longhorn offense was Baylor, which handed the Horns their first loss of the season. In addition to keeping the middle blocking tandem of Brionne Butler, Molly Phillips and Asjia O’Neal at bay, the Bears targeted setter Jhenna Gabriel and overwhelmed sophomore libero Nalani Iosia to keep Texas out of system and unable to defend against their deep attacks.

When opponents minimized the middle blockers’ impact on Texas’ offense and kept the back row scrambling for digs and passes, matches were taken to five sets. In the slugfests, the Longhorn offense was live-and-die by hitters Logan Eggleston and Skylar Fields, whose heroics usually resulted in over 30 combined kills.

Teams with a big block at the net and scrappy libero gameplay exploited the faults in the near-perfect Texas volleyball team. While the Longhorns will likely not encounter many of these elite defensive powerhouses in conference play next season, it can be their kryptonite when it comes to being a legit contender for the championship trophy.

With defensive specialist Sydney Petersen aging out of collegiate volleyball, Texas is signing UCLA All-American libero Zoe Fleck to aid in the defensive struggle. With four years of volleyball under her belt, Fleck will extend rallies and provide mentorship to Iosia, who can become flustered during pressure-cooker situations.

The Longhorns will also benefit from developing bench libero Reilly Heinrich during the offseason. In the Nebraska match, the sophomore was subbed in for an overwhelmed Iosia in the fourth, granting her substantial minutes for the first time this season. Her heroism contributed to some Texas-scoring runs to try and overturn the momentum of the match.

If Texas can further develop up-and-coming liberos Iosia and Heinrich under the wing of veteran Fleck, the Longhorns could emerge as top contenders to run away with the title as a well-rounded team with few weaknesses to exploit. However, that championship window for Texas is closing fast with core starters Eggleston, Phillips, O’Neal and Gabriel entering their senior year.

If the Longhorns want to bring home another trophy in the next few seasons, 2022 is a prime year to light the Tower orange. But they’ll need an improved back row to take home the NCAA title.