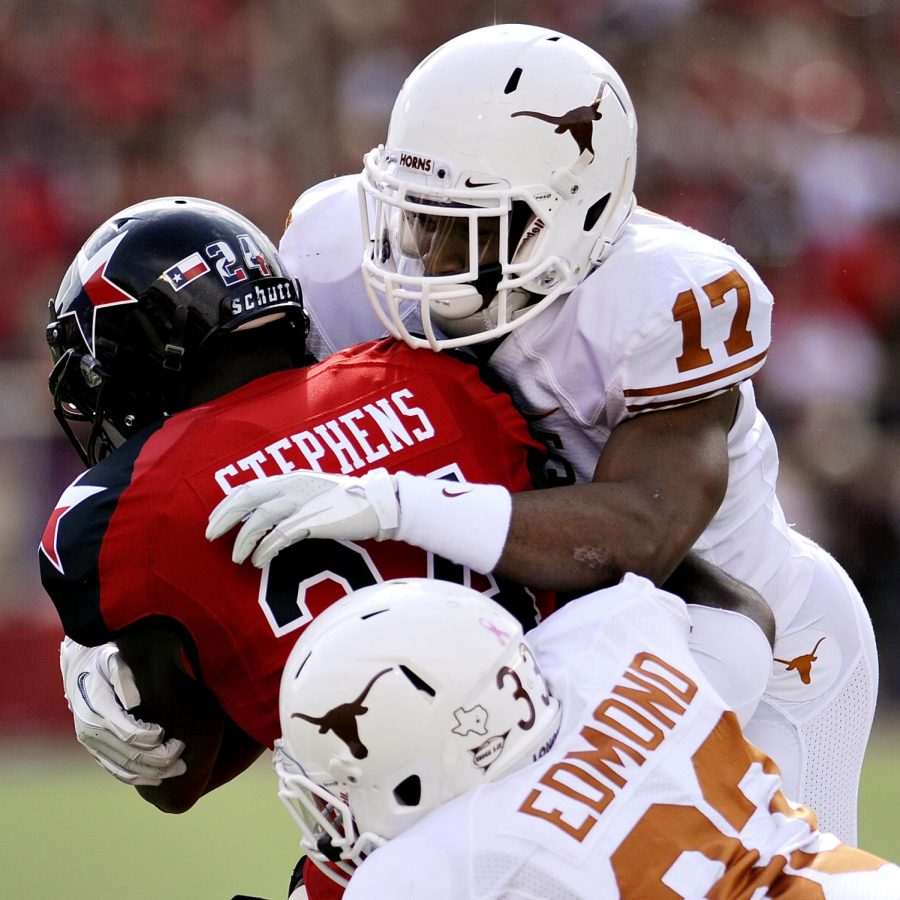 Adrian Phillips helped secure the New England Patriots a tight upset victory over the Los Angeles Chargers on Sunday. Down 16-17 with 10 minutes left in the fourth quarter and the ball in the hands of Chargers quarterback Justin Herbert, Phillips intercepted a pass intended for tight end Jared Cook, taking it all the way back to the endzone for six. Phillips capitalized on miscommunication between Herbert and Cook, helping lead New England to upset one of the AFC’s best. Phillips’ game-changing play was his third interception of the season, tying the former Texas safety for second-most interceptions in the league. The Longhorn also finished the game with three tackles and two deflected passes.

Cardinal Jordan Hicks shined in Thursday night’s highly anticipated NFC matchup between the Green Bay Packers and the Arizona Cardinals. The former Texas linebacker racked up 12 total tackles, seven of which were solo tackles, enough to lead the Cardinals in both categories. Hicks’ highlight of the game came on two consecutive goal-line stops. On first-and-goal from the Arizona one-yard line, Packers running back Aaron Jones took the handoff up the middle, and after the official’s initial ruling of Jones’ touchdown, the call was reversed and Hicks was responsible for the stop. The following play saw no greater outcome for Green Bay, but Hicks quickly filled the gap and stopped Jones again before he could even make it back to the line of scrimmage. Hicks and the Cardinals stopped Green Bay from scoring any points on the drive, forcing the Packers to turn the ball over on downs. While Arizona took its first loss of the season, Hicks took control of the defense and helped hold down one of the most potent offenses in the league.

While the Miami Dolphins’ lost to divisional rival Buffalo Bills, former Longhorn safety Brandon Jones played as a point of emphasis in the Miami defense. Jones came blitzing off the edge several times, eventually landing a shot on Bills quarterback Josh Allen, forcing an incompletion intended for star wide receiver Steffon Diggs. Jones recorded one tackle for a loss which came on the Bills’ two-point conversion attempt at the end of the game. The Longhorn’s Sunday performance was second among Miami defenders in tackles with five. Nearing the midpoint of the NFL season, Jones has established a niche in a strong Miami secondary which utilizes Jones’ speed to come off the edge in various blitz packages.

Tennessee Titans tight end Geoff Swaim hit pay dirt in Sunday’s wild victory over the Indianapolis Colts. The former Texas target was the first Titan to reach the end zone and officially get the ball rolling to bring Tennessee out of a 14-0 deficit and eventually a 34-31 win over their divisional rival. Swaim scored early in the second quarter on a 6-yard catch from quarterback and former Aggie Ryan Tannehill on his way to four catches for 23 yards on the day. Swaim may see a larger role in the coming weeks with Tennessee’s star running back and the NFL’s leading rusher Derrick Henry likely out for the rest of the regular season, forcing Tennessee to lean more on the passing game.