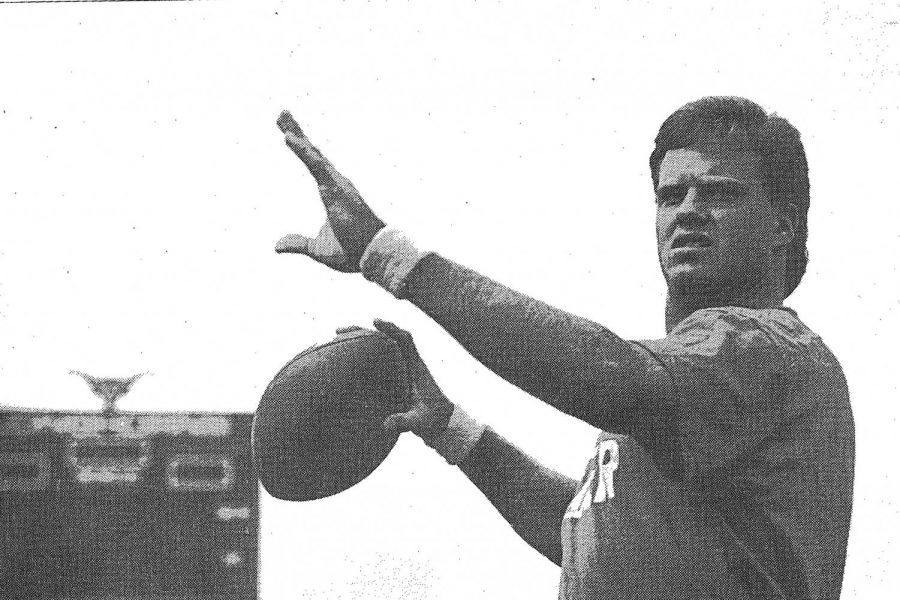 Peter Gardere typically never stayed on the field very long after one of his 41 career starts at Texas. The 1992 Red River Showdown was different.

The former Longhorn quarterback led Texas to the upset victory against No. 16 Oklahoma, making him the first and only starting quarterback to win the Red River Rivalry game four times in a row.

The Sooner faithfuls broke out into cheers of, “Graduate! Graduate!” when the game ended. Hearing the rival fans’ chants, Gardere decided to break his routine by staying on the field to enjoy the scene.

“I didn’t know what they were saying at first because, usually, there was profanity involved,” Gardere said. “I just thought that was interesting the way they said it. It was fun to listen to.”

Now, nearly 30 years since he last donned the Longhorn uniform, Gardere will be inducted into the Texas Athletics Hall of Honor this Friday in recognition of his athletic career.

Despite having to go through three offensive coordinators and two head coaches during his time at Texas, Gardere had one of the most prolific careers in program history. The quarterback held several school records by the time he left the Forty Acres, including career passing yards and touchdown passes.

The best season during Gardere’s stint at Texas came in 1990. In a season that became known as the “Shock the Nation Tour,” the Longhorns upset No. 21 Penn State, No. 4 Oklahoma and No. 3 Houston. Texas finished with a 10–2 record and won its first Southwest Conference championship since 1983.

While all of his accomplishments as a Longhorn made him an obvious choice for the Hall of Honor, Gardere credits his teammates for his success.

“It’s great to be remembered,” Gardere said. “I just kind of went through my head of all the people that I need to thank that helped me get to where I was. You don’t do it by yourself. Football is a team sport so I wish I could give them all Hall of Honor inductions, too.”

Even though both his father and grandfather played football at Texas, Gardere said he would have strongly considered playing for Southern Methodist University if not for its infamous punishment for recruiting violations in 1987.

Besides having to choose what school he wanted to attend, Gardere also needed to decide what sport to pursue. He excelled at baseball at an early age and was drafted after high school by the Chicago Cubs in the 1988 MLB Amateur Draft.

The Houston product also played for the Longhorn baseball team after he played his last snap at quarterback, helping Texas make the 1993 College World Series.

Ultimately, Gardere selected Texas not because he was being pressured to follow in his father’s footsteps, but because of what the University offered.

“At the end of the day, he left it up to me,” Gardere said. “I decided where I would want to be if I wasn’t playing football. It’s a great University (with) good people, and that’s where I wanted to be.”

Following his senior year, Gardere signed a free agent deal with the Seattle Seahawks as a punter. He then went on to punt in the Canadian Football League for three years, playing for the Sacramento Gold Miners and the Memphis Mad Dogs.

Gardere briefly enjoyed the big screen after his playing career, working as a passing coach and as a stand-in for the 1999 movie, “Varsity Blues.”

Along with being the only quarterback on either side to go 4–0 in the Red River Rivalry, Gardere remembers the games against OU fondly because of how unique the environment was. Even with a 2-year-old daughter, Gardere, who works in real estate, still almost always makes the annual trip to the Cotton Bowl for the game, including this year’s Red River Showdown.

“I get chills just thinking about running down that tunnel,” Gardere said. “It was just a fun, exciting game. I would play until I almost puked. Sometimes after the game, I just left it all out there.”