“Girlboss” term empowers some, alienates others 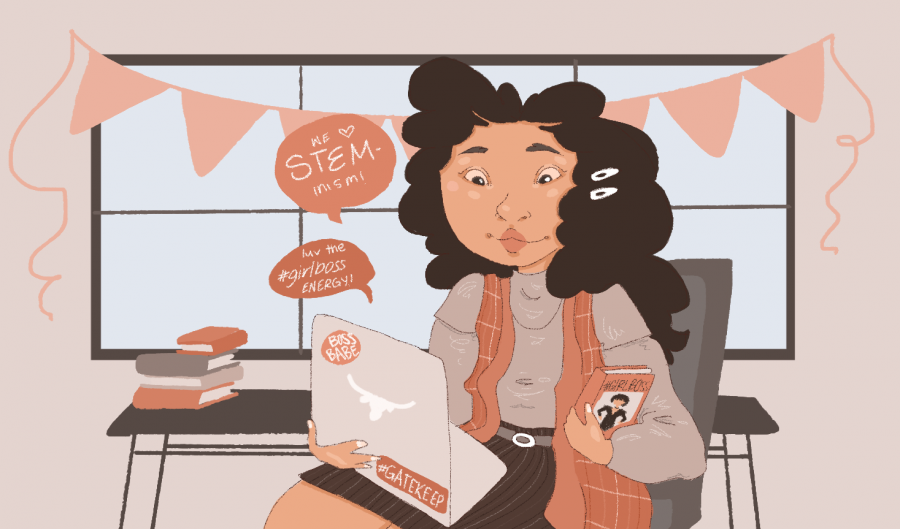 Editor’s Note: This article first appeared in the November 2 flipbook.

As time ticks away late into the night, Amelia Nickerson agonizes over a computer science project. Suddenly, the concept clicks, and she submits her assignment.

“I (was) like, ‘Oh my gosh, girlboss. I just coded this thing,’” said Nickerson, a computer science and business honors sophomore, said.

When author and entrepreneur Sophia Amoruso released her self-help book “#Girlboss” in 2014, hundreds of thousands bought into the idea of a powerful female as a girlboss — a woman who takes charge of her life and assets.

Seven years later, the effect of girlboss culture, perpetuated by Amoruso’s book and social media trends, still stands, leading to new terms like “STEMinism” and “boss babe.” While some view the new vocabulary as empowering, others view the words as sexist and derogatory toward women in traditionally male-dominated fields.

As a woman who’s been interested in engineering for most of her life, Carly Smith, a mechanical engineering senior, said she doesn’t see the necessity of adding “girl” to the word “boss” and never felt inspired by the term.

“When terms like that are used, (they’re) very cutesy and kind of discrediting almost because it’s like, ‘Yes, you are a boss. You are in a position of power, but we’re going to call you this little cutesy, immature name,’” Smith said.

In fall 2020, women made up less than 50% of students in the Cockrell School of Engineering and the McCombs School of Business. Mechanical engineering senior Natalie Jaecks said she uses “girlboss” to reclaim a word originally used in a derogatory way.

“I don’t think of (terms like girlboss) as being sexist because they’re almost our way of acknowledging where we’re at as a society,” Jaecks said. “(They’re) showing the gender inequalities (and) putting them on display in fields like business or engineering and aiming to confront them.”

Other sayings like “gaslight, gatekeep, girlboss” circulated on the internet in early 2021. Although the words “gaslight” and “gatekeep” imply negative behaviors, Nickerson said she and her friends see the expression as uplifting.

“My friends and I always use that term, ‘girlboss gaslight, gatekeep,’ but still in a positive way,” Nickerson said. “It’s a joke, but we still understand that ‘girlboss’ is a positive thing for us. We kind of throw in (gaslight and gatekeep) just to be funny.”

Both Smith and Jaecks said they think having more female engineers would help produce products suited for women as well as men.

“A more diverse work environment really does benefit everyone,” Jaecks said. “It helps us make more well-rounded business decisions when we pull talent from all corners of the earth. In engineering, it helps us make design decisions that aren’t just tailored for one particular body or mind.”

“​​I love the word ‘girlboss,’” Nickerson said. “When I hear ‘girlboss,’ I think ambition, work ethic, you want to get things done, you’re smart. That’s an inspiring term to me.”