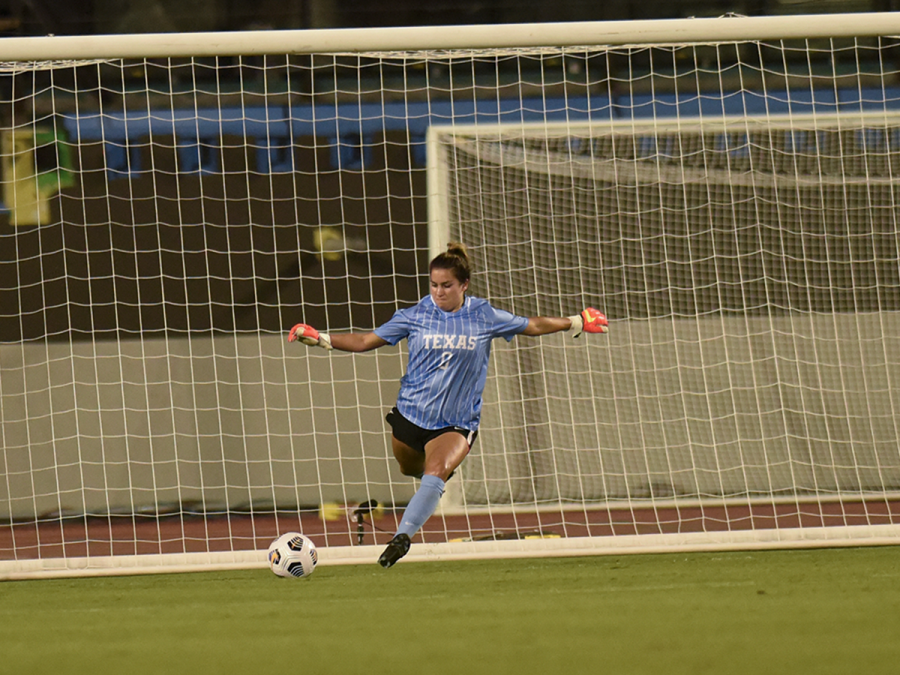 Savannah Madden stepped on the Forty Acres in 2017. But the goalkeeper waited two full seasons before getting the opportunity to play a full 90-minute contest.

Now, Madden is an integral part of the Texas soccer program as a dominant force between the posts.

Through 17 games this season, the fifth-year senior has played every possible minute, tallied eight shutouts and was named Big 12 goalkeeper of the week on Sept. 7 for the fourth time in her career.

The Longhorns are going above and beyond their preseason expectations as they are looking to finish in the top two in the conference regular season for the first time since 2007, back when Missouri and Texas A&M were a part of the Big 12.

It’s in large part to Madden’s shot stopping abilities and her leadership.

During the Longhorns first win of the season on Sept. 2 against New Mexico State, the senior’s ability to make four critical saves while not conceding a goal made the difference. Head coach Angela Kelly said that the team voted on Madden as the game changer for the contest.

“She’s just so mature back there,” Kelly said.

In one of the Longhorns biggest tests all season against a 2020 NCAA quarterfinal team in No. 10 TCU, Madden stepped up. The goalkeeper only gave up one early goal but stopped eight shots, drawing against a team with the highest scoring average at 2.47 in the conference.

“Savannah came up big and that’s what you need when you have a big-time goalkeeper,” Kelly said after the Sept. 30 match.

The road hasn’t always been pretty, as the program went 4-3-2 in non-conference games. At a time when the Longhorns were not registering wins at the rate they should, the team found a vocal leader in the senior goalkeeper who began to take on a bigger role: coach.

“I knew in preseason that we were going to have a lot of learning mistakes and that I would have to be the one to coach them (young players) through it,” Madden said. “When our preseason didn’t go the way we wanted, we had to drill into them, ‘Hey, this is college now, we have to let go of that game and move onto the next.’”

The super senior decided to return to Austin for a fifth-year after the prolonged 2020 season. She said the decision wasn’t that difficult.

“I think I just wanted to leave Texas with leaving a mark on the field,” Madden said. “End my career with as many stats as I could get and obviously pursue professional soccer.”

The decision to wear the burnt orange and white for another season is looking like the right one for Madden.

The Longhorns broke a 13-year-old school record when the team drew against West Virginia on Oct. 21st. In the span of six contests, Madden and Texas defense were able to keep the ball out of the net, giving this year’s team the record for the longest consecutive shutout streak.

“They defend from the top down and I’m just glad that I can be the rock for them on the back,” Madden said. “They make me want to play hard every game for them and they play hard for me.”

With one program record already broken this season, the Longhorns are looking to topple an even bigger one: making it past the third round and winning the NCAA championship. With Madden as the shot stopper, watch out for Texas as the Longhorns chase the title.