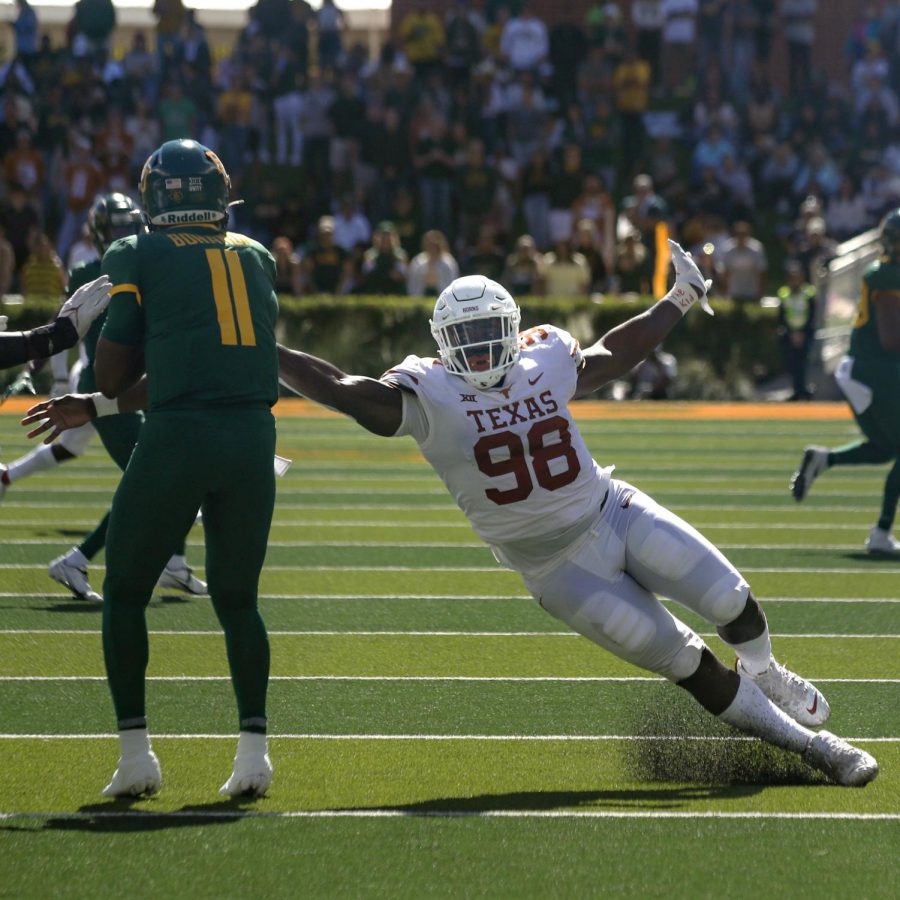 After the Longhorns were embarrassed in Ames, Iowa, by the Iowa State Cyclones, Davis was recorded on a team bus ride after the game as he emotionally lit into his players for supposedly laughing and joking after the 30-7 defeat — Texas’ fourth-straight loss of the season.

In the video that leaked on social media, Davis can be heard scolding the Longhorns with numerous expletives, suggesting that any players who aren’t taking the season seriously should transfer out of the program.

Davis, a longtime defensive line coach who’s had multiple stints at Alabama, Texas and in the NFL spanning an almost 30-year coaching career, was brought back to the Forty Acres by head coach Steve Sarkisian to join his new staff. Sarkisian addressed the video at length Thursday.

“That was encouraging to me, that we have men on our staff that stand for what we believe in. Clearly we’re here to build a culture that we want,” Sarkisian said. “What we’re doing here is not for everybody and there’s going to be people (for whom) that doesn’t work for them, and we wish them the best of luck if that’s what they decide to do. But ultimately, the people that we have in our locker room are going to be ones that are committed to the cause that we’re on, whether that’s the culture, the discipline (or) the commitment that’s needed to be special.”

In the face of Texas’ longest losing streak since 2010, Ojomo, a junior defensive lineman, met with the media Monday prior to the video’s leak. Outside of not wanting to make headlines for the wrong reasons, the first thing that came to Ojomo’s mind was relying on his coach’s experience.

Davis’ first year at Alabama was 2007. Brought on by head coach Nick Saban to be a part of his original staff in Tuscaloosa, Davis was tapped to be the defensive line coach. That year, the Tide went 6–6 in the regular season and ended up in “some s**t” bowl game — the Independence Bowl — according to Ojomo. Just two years later, Davis was on staff for Saban’s first of six national championships at Alabama.

“I’m going to lean on my coaches and what they’ve been talking about,” Ojomo said. “We’ve got to get our belief right. Belief leads to results and results lead to confidence.”

So far, the only Longhorn to transfer out of the program after the blowout Iowa State loss was wide receiver Joshua Moore, who reportedly had an altercation with Sarksian at practice the week prior. Sarkisian announced Moore’s departure from the program Monday.

It’s impossible to know whether or not Moore was on the same postgame bus that Davis gave his speech on, as the football team requires multiple buses to travel, but it’s safe to say the message resonated with Ojomo as one of the tenured leaders of the defense.

“Who’s on the bus, and who’s not on the bus, you know, who’s going to be along for the ride?” Ojomo said. “You got to try to hold the guys in, but there are people that are going to pull you down, and I’m not saying Joshua Moore was that, but people that don’t want to be on the bus ride are gonna ultimately hold the bus (back).”

In his first year, Sarkisian isn’t trying to build for only this season; he’s trying to build a program, Ojomo said. With that in mind, part of that process is to weed out some of the players who might not be fully locked in to what a new staff — that didn’t recruit them — is selling. Davis’ rant after Saturday’s loss suggests that the coaches hope to do just that, with five defensive lineman already set to commit to Texas as part of the 2022 recruiting class.

Throughout the four years Ojomo has been with the program, the junior said Texas has dealt with numerous good players who haven’t been the best locker room teammates and players who have been unable to take tough coaching, taking it as a personal attack rather than seeing the big picture.

Constant turnover and problem-solving has been the story ever since Ojomo arrived in Austin, and he hopes that Texas Athletics Director Chris Del Conte has finally put the right staff in place to figure out broken pieces.

“​​I don’t know what happened in ‘09, ‘10 that started this whole decade, but something went loose,” Ojomo said. “A screw went loose, and we’ve forever been trying to find which screw.”