The Big 12 running back club exists, and it starts with Bijan Robinson and Breece Hall’s friendship 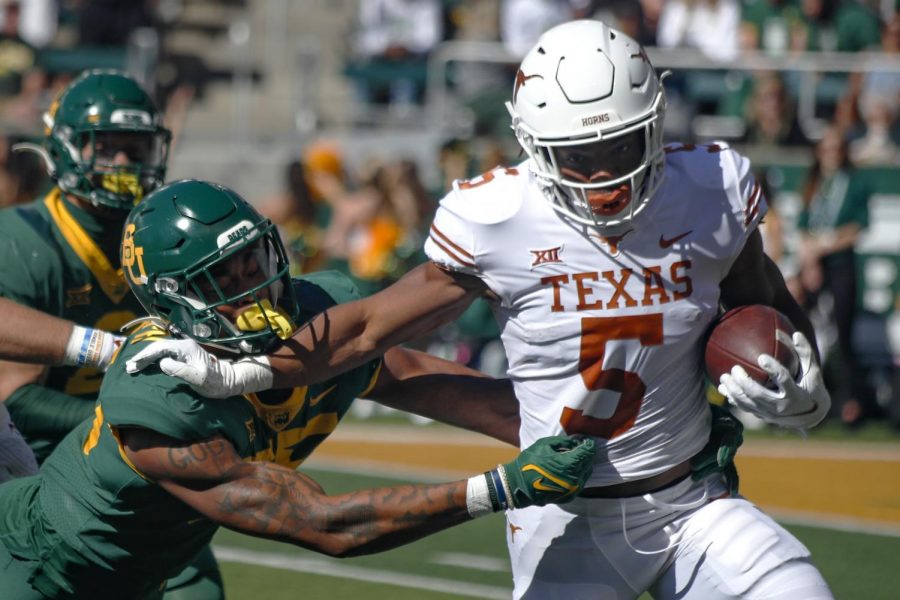 Two-thirds of the Big 12 running back club are getting back together.

The similarities between Texas running back Bijan Robinson, TCU running back Zach Evans and Iowa State running back Breece Hall span more than just playing the same position within the same conference.

At one point within the running backs’ careers, all three backs reached out to one another on social media. After connecting, phone numbers were exchanged, friendships were created and encouragement and support flourished.

“We’re still running backs and we’re still humans outside of football that just like to encourage each other and keep making each other better,” Robinson said.

As a sophomore, Robinson currently ranks eighth among all NCAA running backs for the most rushing yards on the season with 967. In Big 12 play, Robinson averages 133.6 rushing yards per game and is a defining piece of the Texas offense. The Tucson, Arizona, product has 11 rushing touchdowns on the season, one less than his good friend Hall.

Hall ranks sixth in NCAA rushing yards at 985 yards with 12 touchdowns. According to NCAA record books, Hall is the highest rated back in the Big 12, sitting behind top running backs from Syracuse, Michigan State, Central Michigan, BYU and Missouri.

Robinson and Hall will face one another on opposing sides of the ball come Saturday in Ames, Iowa, while Robinson is looking to outperform and outscore Hall, there is nothing but mutual respect between the two young backs.

“We just say keep grinding and keep the focus,” Robinson said. “No matter what the situation is, know that you just know that God has a plan … we were just talking about (how) it’ll be just fun playing against each other this upcoming week, and so it’s just fun to get to play against a guy like that.”

According to Robinson, the two backs chat frequently and did so Sunday after a Saturday of tough matchups in Baylor and West Virginia. With both programs’ losses in Week 9, offenses and defenses alike are coming with a vengeance to win in Week 10. However, it’s not Big 12 trash talk going into Saturday’s matchup between the Longhorns and the Cyclones, but rather encouragement.

A Wichita, Kansas, product, Hall chose the Cyclones over Kansas State. In his third season with the Cyclones, the back rushed for a season-high against the Wildcats in Week 6 with just under 200 yards. Hall averages 149.4 yards per game against Big 12 opponents on the season, and will face a Texas defense on Saturday that loves to give up yardage on the ground. And to Texas’ disadvantage, Hall is smart in the run game.

What Robinson most admires about Hall’s game is his ability to be patient. According to Robinson, Hall is patient in how he sits in the “back behind the line of scrimmage” and how “he reads and sets up blocks.”

But where Robinson benefits the most from his friendship with Hall isn’t just banter and encouragement — it’s motivation.

“He’s another great running back in college football, and (to) just see that he’s in the Big 12 conference, for me, I look at him and I watch some of his game and some of his tape, and try to mimic some of the things he does,” Robinson said.

Iron sharpens iron, and Robinson is surely being sharpened by Hall’s dominating performances.