The sport that stuck: From Longhorn to Olympic Trials, former Texas swimming and diving star inducted into Hall of Honor 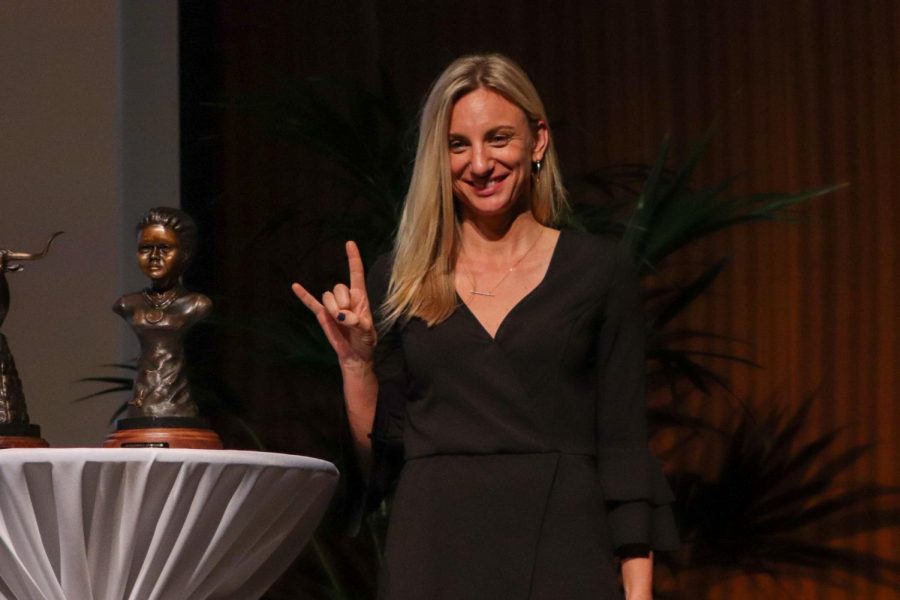 The former four-time Big 12 champion has one piece of advice for those who wish to walk in her shoes: “When you stick to it, you will see the results.”

From an early age, Jessica Livingston Gibson spent a large majority of her childhood years as a gymnast. From the high beam to the vault, Gibson thought gymnastics was what she wanted to do.

That was before Gibson’s mother signed her up for a local diving competition. Though reluctant, Gibson quickly translated her skills from the balance beam to the diving board.

Despite the preparation and encouragement she received from her coaches, she placed among the last on the leaderboard. But Gibson kept diving.

“It was just kind of the sport that stuck,” Gibson said.

It would be several competitions later before Gibson would hold her first trophy. One sunny morning in The Woodlands, Texas, Gibson stepped onto the diving board expecting to come last. Instead, she went from 25th place to first, winning the first of many gold medals.

“It was very unexpected because I had always been at the bottom of the competition and to win that medal was a reminder that if I work hard and keep trying, I can really do it,” Gibson said.

Gibson still has the gold medal from her first diving competition. It followed the five-time All-American everywhere afterward, including to the Forty Acres, where she was inducted into the Texas Athletics Hall of Honor last weekend.

Gibson first arrived at Texas as a sophomore in 2005 after transferring from the University of Minnesota. She quickly became one of the top divers in the Longhorns’ swimming and diving program.

As a sophomore, her successful collegiate career was met with an incredible start at the Big 12 Championship meet, where she won the platform event and placed third and fourth on the 1-meter board and 3-meter board, respectively. In the same year, Gibson went on to help the Longhorns win the league’s team title.

Her junior year, in 2006, Gibson won the platform event at the conference and was awarded the Big 12 Women’s Diver of the Year award. A year later, at the 2007 NCAA Championship event, Gibson won the individual title on platform.

“I really just had to trust my training,” Gibson said. “If you overthink, you can get in your head and nerves can get the better of you. I knew I had to stay calm and in the moment. We practice every day for several hours a day for that reason, so that we can autopilot. And that’s what I did.”

Gibson’s successful career with the Longhorns finished in 2009 where she placed second on the platform and helped the Longhorns to an outstanding fifth-place finish.

Some of Gibson’s most memorable moments, though, were those that weren’t on screen or in the papers.

The former Longhorn star said that beyond just her numbers and stats in the pool, she made some of her closest relationships at Texas.

“I had three of my former teammates from Texas who are still some of my best friends who came to support me at the induction,” Gibson said. “So it really goes to show just how much it transfers further than the sport itself.”

After earning her degree in advertising from Texas in 2009, Gibson went on to become a finalist at two USA Olympic trials and later went on to compete in several competitions as a member of the U.S. National Team.

Now a national buying director for ALDI in Illinois and a mother, Gibson reflects on her achievements at Texas as she walked down the stage last Friday to be inducted to the Hall of Honor.

“I was thrilled. I honestly didn’t expect it all. The caliber of athletes that I get to be a part of in the Hall of Honor is amazing and a huge honor,” Gibson said.

For those that look up to Gibson and her career, she leaves one piece of advice.

“I know it sounds cliché or obvious, but stick to it,” Gibson said. “That’s really, to me, the reason that I’ve been successful. It’s not because I was always successful at diving or that it was my one-niche thing, but I knew that if I stuck to it, I would always see the results from there.”