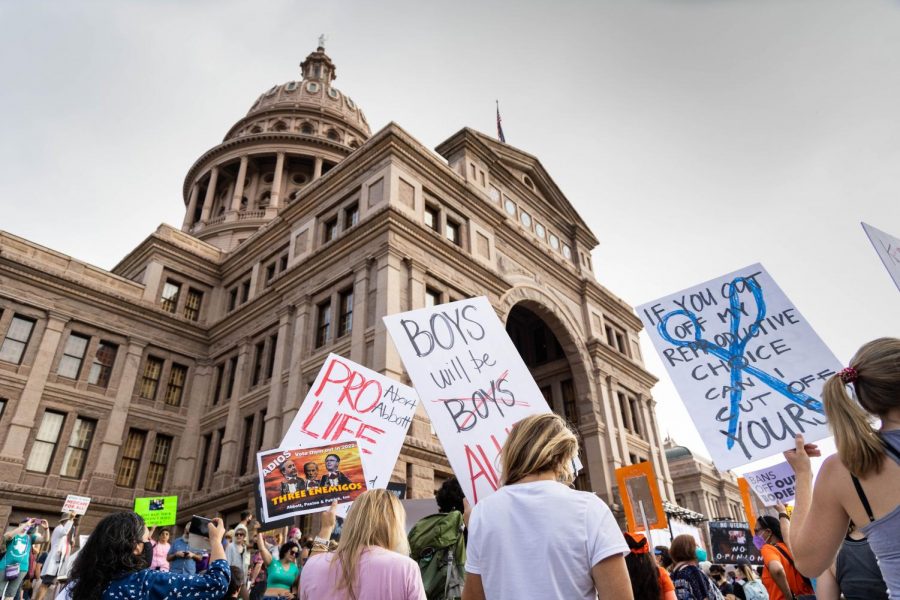 Pro-choice signs waved in the air as hundreds of women chanted for their human rights. Erupting with anger, protestors flooded the Texas State Capitol on Sept. 1, only hours after Senate Bill 8 went into effect.

Senate Bill 8 prevents any woman in Texas from receiving an abortion after the first detection of a fetus’s heartbeat, which could be as early as six weeks. The bill makes no exceptions for rape or incest and penalizes those who attempt to perform the procedure.

Wanting to get involved in the fight for women’s rights, Isabel Richards and Shreya Tamma joined Women’s March ATX, a local women’s activisit group, to get other UT students involved with the anti-abortion bill protests.

“I’ve always been a big proponent for reproductive rights, but it was specifically the dramatic passing of Senate Bill 8 that made me want to get involved recently,” said mechanical engineering sophomore Richards. “We, as citizens of Texas, don’t approve of (Senate Bill 8), and we think it’s completely unconstitutional.”

After attending the Austin Women’s March on Oct. 2 outside the Texas Capitol, where thousands joined together to listen to a diverse group of speakers address important womens’ rights issues, biomedical engineering junior Tamma said she believes legislators need to consider abortion with an open mind.

“I wish legislators listened to their constituents and came out to events like (The Women’s March) and tried to truly understand other people’s stories, but that has not been happening,” Tamma said. “Senate Bill 8 is a good starting point to get lots of people rallied up, but I think that there’s a much larger movement behind all of this.”

Tamma said she sometimes feels demotivated, especially when recieving criticism from pro-life and pro-Senate Bill 8 groups. However, she won’t give up.

“When I go to events like (The Women’s March), my heart is just filled with so much hope,” Tamma said. “There’s people willing to put their lives on the line to defend a woman’s right to abortion and health care.”

Attorney Austin Kaplan, a speaker at the Austin Women’s March who represents Planned Parenthood in the Texas legislation against Senate Bill 8, said he believes every student needs to take an active role in Senate Bill 8’s removal.

“I’ve now spent a month straight litigating days, nights, weekends, against this law trying to get a court to finally order it unconstitutional,” Kaplan said. “We were nearly successful, and so the fight goes on.”

Nikita Kakkad, a biomedical engineering and Plan II sophomore, said she understands that choosing to get an abortion can be incredibly difficult. If she became pregnant right now, shesaid she would definitely consider abortion.

“Parenthood simply isn’t an option for me right now,” Kakkad said. “I’m just not emotionally, physically or mentally in the place to want to have a child, especially because I want to go to graduate school and do things beyond just being a mother.”

Kakkad said while she thinks it’s important that the Biden administration shared their opposition to Senate Bill 8, the fight will continue until all women have equitable access to abortions.