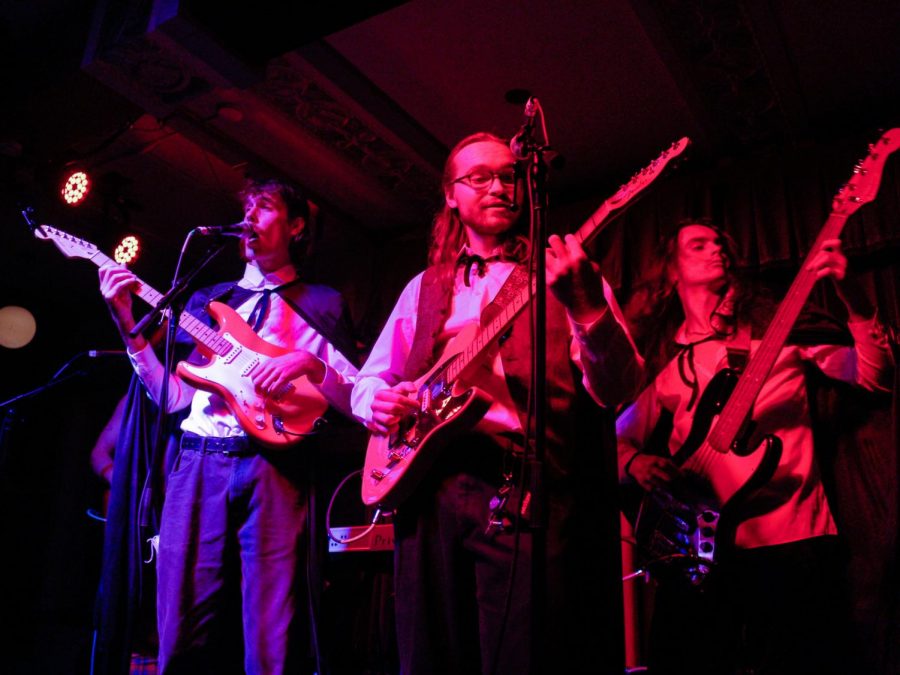 Editor’s Note: This article first appeared in the November 2 flipbook.

“I always try and keep in mind to make sure that I’m  enjoying what I’m playing, and being on stage and just  having fun jamming with my friends,” Josef said.

Josef, both a songwriter and musician, gained traction  in 2019 with the popularity of “I Love You Aubrey Plaza,”  a song featured on his first EP. On Oct. 26, Josef and his  band brought music lovers together at the Cactus Café as  they celebrated Halloween with costumes and alternative  covers of popular songs.

Headliners, a UT Events + Entertainment committee  that organizes live entertainment for students, hosted the  event. Ally Protass, chair of Headliners, said she heard  about Josef from her former bandmate. After checking

out some live shows, she invited him to play at UT for the first time.

“He’s just really good at making sure everyone’s having a good time, even if they don’t know his music,” English  sophomore Protass said.

Josef’s performance marked this year’s second “Live at the Cactus Café” event, which Protass said serves as a  great environment for students to sip on beverages and  soak in live music.

“It’s a small, intimate venue, and we think it’s a great place for people to really be able to experience a concert,”  Protass said.

Megan Knight, an interior design freshman, stumbled  across a flyer for the event outside of the elevator in her  dorm building. She said she knew Josef’s name sounded  familiar and realized she already saved a few of his songs  on her playlists. As an alternative music fan, Knight knew  she wanted to attend the performance.

“He did a good job of incorporating everything,” Knight  said. “There’s not one song that has a specific genre, and all of his music is just very different.”

“I’m not sure if this was scripted, or if they just kind of  impromptu this, but they started doing a bunch of covers  of random songs like ‘Yellow’ by Coldplay and ‘Bodies’ by  Drowning Pools,” Knight said. “It was really funny and it  was a different pace of the performance.”

Josef said he loves performing these eclectic covers, citing it as a way to experiment with music styles and en ergize the crowd.

“It’s fun for a moment to branch away from (original  songs) into almost some sort of crazy opposite, and just  create something very wild and chaotic for a brief mo ment,” Josef said. “For us, it’s memorable too, because  whenever we do covers, most of the time they’re very  loose and messy, but we try and bring energy with them  and make them fun.”