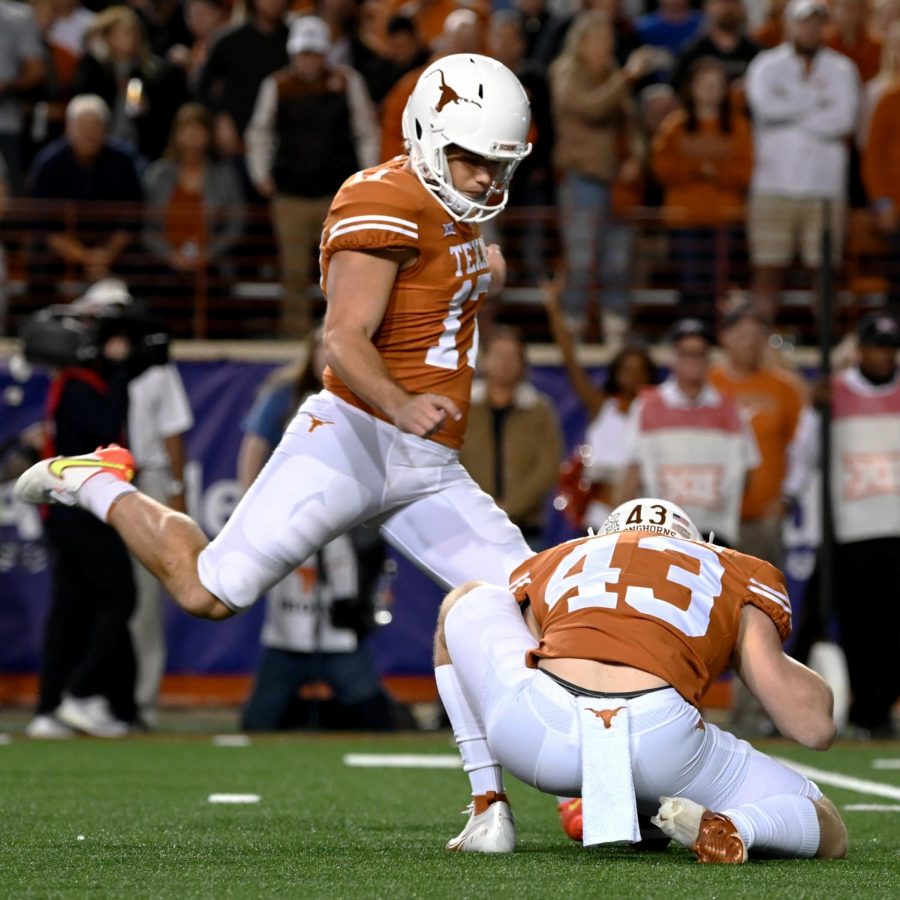 The Longhorns will play one final game this season  Friday at Darrell K Royal-Texas Memorial Stadium against Kansas State. While many students will be out of town, still stuffed from Thanksgiving dinner, Friday represents one final chance to buck a historic six-game losing streak and end the season with a win for the seniors who will play their final game in burnt orange.

Last year’s COVID-19 eligibility rules are still in effect for those who haven’t used them yet, muddying the picture when it comes to who will or will not return next season. Notable COVID seniors on Texas’ roster include linebacker DeMarvion Overshown, cornerbacks D’Shawn Jamison and Josh Thompson, safeties Brenden Schooler and B.J. Foster, offensive linemen Derek Kerstetter and Denzel Okafor, kicker Cameron Dicker and tight end Cade Brewer.

Overshown has been an unquestioned leader for the Texas defense. The fourth-year Longhorn is always easily spottable on the field due to his trademark arm bands that he likes to load up on his arms or legs. Sporting a 6-foot-4-inch, 223-pound frame, “Agent 0” is an ideal candidate to suit up on Sundays in the NFL. Since making the switch from safety to linebacker, the anthropology major has starred at Texas and his steadfast presence will leave a void on defense.

Jamison has consistently been one of the best returners in the country in addition to his duties as cornerback. Serving as Texas’ primary punt and kick returner since his freshman year, Jamison has returned 47 punts for 353 yards with one touchdown, and 52 kicks for 1,380 yards and two touchdowns. The physical culture and sport major briefly went down last Saturday against West Virginia, but returned and should be healthy for senior day at DKR.

Thompson has been a rock at cornerback for the Longhorns this year, but was ruled out for the rest of the season with a fractured fibula prior to last week’s game. While the physical culture and sport major won’t see the field Friday, his career totals include 109 total tackles and two interceptions, including a pick-six against Texas Tech this year.

Schooler is a sixth-year safety who played his first four years at Oregon as a wide receiver and then had a short stint at Arizona before joining the Longhorns. The 6-foot-2-inch wide receiver converted to his current position at Texas because of depth concerns but has made the most of it. The graduate student has 45 tackles and two pass breakups this season.

Foster’s presence at the other safety position has been a mainstay over the past couple of years. The physical culture and sport major has received consistent playing time since his freshman year on the Forty Acres. To date, the fourth-year defensive back has 168 total tackles and five interceptions, including three this season.

Kerstetter has anchored Texas’ offensive line for several years. Since starting five games during his sophomore year, the 6-foot-5-inch, 310-pound lineman has started every game in the past three years. The corporate communications graduate student is also a five-time member of the Big 12 Commissioner’s Honor Roll and earned an All-Big 12 honorable mention in 2020.

Okafor has been out with a season-ending lower leg injury and his presence on the offensive line has been missed. The group has yet to find stability since the 6-foot-4-inch, 322-pound lineman went down against TCU. Okafor started in all nine regular season games last year before sitting out of the Alamo Bowl. Prior to his injury, he started every game this year as well.

Dicker will leave a long legacy as one of the best kickers to come through Austin. His game-winning field goal in the 2018 Red River Showdown as a freshman cemented his status as a legend. This year, “Dicker the Kicker” took over punting duties as well, ranking eighth nationally with a 47.3 yards net average and was named a Ray Guy Award semifinalist. Dicker has also put 83.3 of his field goals through the uprights this year, the best percentage of his career.

Brewer earned an All-Big 12 honorable mention last year before utilizing his extra year of eligibility this season. Brewer has been Texas’ top tight end since his junior season and has caught 55 passes for 579 yards and seven touchdowns over the course of his five-year career. Notably, he caught a 25-yard touchdown pass to force overtime in Texas’ Week 11 loss to Kansas.

While Texas’ season has failed to live up to expectations, head coach Steve Sarkisian stressed how important Friday is to the legacy of his seniors.

“We owe it to our seniors, we need to celebrate them this week,” Sarkisian said after last Saturday’s game. “They’ve given a lot to this University and a lot to this program, and so we’d like nothing more than to send them out with a win in their last game at DKR.”